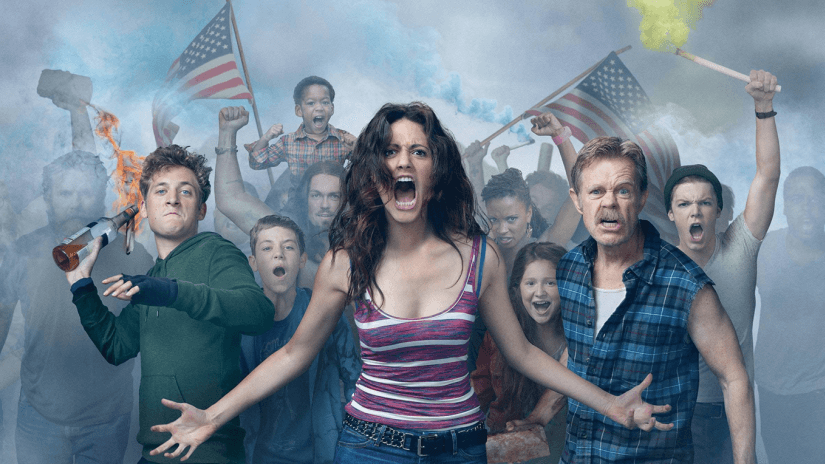 Shameless has been on the air for 10 seasons and ends its impressive run with Season 11. Season 10 of the show concluded in January 2020. The series follows the Gallagher clan, a low-income family living in the South Side of Chicago. Frank (William H. Macy) is the technical head of the household, but Fiona (Emmy Rossum) is really the one who takes care of her younger siblings, at least, for most of the show’s run.

The Gallaghers are a highly dysfunctional family who consistently engage in morally corrupt activities like drug use and violent crimes. Their indecent activities usually stem from their less than ideal upbringing by Frank and Monica (Chloe Webb). Despite their immoral conduct, the Gallaghers are a sympathetic family who at their core really love and care about each other.

With Shameless on hiatus and only one more season left, you’re bound to be on the hunt for a new show to watch. We selected a few series that may fulfill your need for reckless family dramedy.

Weeds
What The Show Is About: Widower Nancy Botwin (Mary-Louise Parker) starts selling weed (which would totally be legal now) to make money to support her and her two sons in their upper-middle class suburban neighborhood. The Weeds cast also includes Elizabeth Perkins, Justin Kirk, Hunter Parrish, and Kevin Nealon. Jenji Kohan is the creator of Weeds.

Why Fans Of Shameless Would Like It: Shameless and Weeds both involve their characters becoming more corrupt as they age. As the series goes on, the Botwins become more involved with the illegal drug dispensing business, and engage in other criminal behaviors. Shameless and Weeds are both Showtime dramedies so they have similar tones and themes.

Malcolm In The Middle
What The Show Is About: Malcolm in the Middle centers around Malcolm (Frankie Muniz) who discovers that he’s a genius. Malcom’s intelligence comes as a surprise to his less than scholarly family. The cast of Malcolm in the Middle includes Jane Kaczmarek and a pre-Walter White Bryan Cranston.

Why Fans Of Shameless Would Like It: Malcolm and his family may be very tame in comparison to the Gallagher family, but they still have their own brand of highly dysfunctional behavior. The family also consists of characters who have some of the characteristics of Fiona and her siblings. Lip (Jeremy Allen White) and Malcolm could be the same person if a few very critical factors changed. Scary to consider? I know. Malcom in the Middle is like the PG version of Shameless, with more stability and less drug use and criminal activity.

Shameless UK
What The Show Is About: The original Shameless series began in 2004 and ran until 2013. Like the American version, it follows the Gallagher family with many of the characters overlapping. However, unlike the American version, Fiona, played by Anne-Marie Duff in this version, leaves after Season 2. She also ends up with Steve/Jimmy, played by James McAvoy. David Threlfall leads the cast as Frank Gallagher.

Why Fans Of Shameless Would Like It: If you’re looking for a good origin story, then Shameless is a great series to watch to see how the shows intersect and stray apart from each other. The first season of the American Shameless follows the original blueprint fairly closely, but finds its own pace, rhythm, and identity by Season 2. The series are quite different so you won’t feel like you’re just watching the same show with different accents.

Skins
What The Show Is About: Skins follows a group of teens as they deal with their sexuality, love, growing up, friendship, and identity. The series takes a gritty look at adolescence and follows three different groups of teens. Skins aired for six seasons and had three standalone movies/miniseries. The Skins cast included Kaya Scodelario, Nicholas Hoult, Joe Dempsie, Hannah Murray, Kathryn Prescott, and Jack O’Connell.

Why Fans Of Shameless Would Like It: Skins is more of a drama than Shameless, but each series has both dark and comedic tones. The series also tackle the pain of growing up and trying to find yourself. Skins also deals with less than noble characters whose chaotic behavior brings everyone around them down.

Arrested Development
What The Show Is About: The Bluth family finds themselves in a peculiar situation when George Bluth Sr. (Jeffrey Tambor) heads to prison for white-collar crimes. Michael Bluth (Jason Bateman) must step up and try to keep their real estate business running. Arrest Development aired for five seasons, two of which were Netflix exclusive seasons.

Why Fans Of Shameless Would Like It: The Bluth family is a mess. In fact, we can see a world where the Bluth and Gallagher family argue over who is the messier family. Obviously, it’s the Gallaghers, but we’re not sure they would see it that way. The Bluth and Gallaghers were once on complete opposite sides of the financial spectrum, but share in their volatile family dynamics.