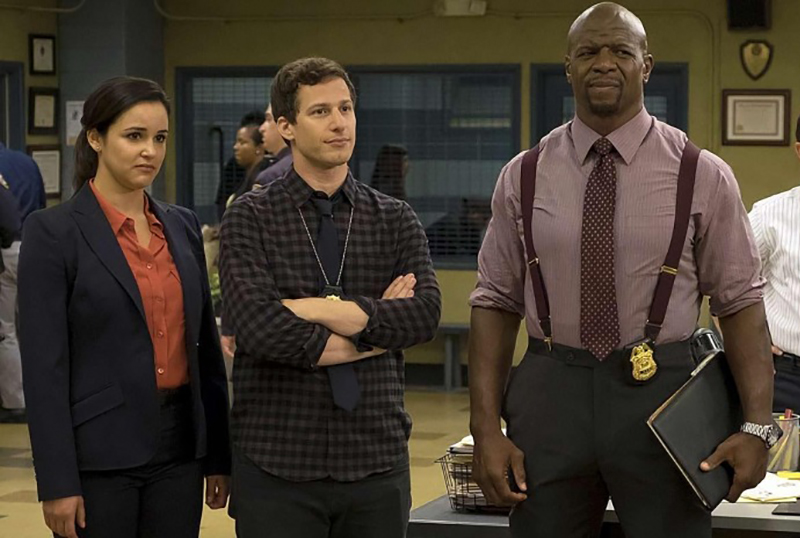 The stars of the show all said goodbye to the much-loved sitcom with emotional posts on their social media accounts, after finishing work on the series finale.

Melissa Fumero, who plays Amy Santiago, shared a photo of her very first security badge along with the sweet story behind her picture.

“8 years ago, @beezus218 walked me, @stephaniebeatriz & @chelsanity to get our pictures taken for our lot badges,” Amy wrote.

“Something about that moment made everything really real – we actually made that pilot, it actually got picked up, we actually were about to shoot a whole season of this incredible show on this lot with this amazing cast that I was loving more and more each day.

“Filled with so much excitement and nerves, Chelsea said something that made me laugh right as the photographer clicked the camera… and that moment was predicative of what the next 8 years would be like.

“Each day was full of laughter, of excitement, of nerves, of confidence, of elated exhaustion, and of beautiful friendship & collaboration.”

Terry Crews shared a side-by-side comparison picture of himself in his role as Terry Jeffords.

“What can I say. Been in tears all day. 8 years with this wonderful cast and crew. The highs, the lows and everything in between – but we made it.

“I’m so thankful for the fans who kept us alive when we were dead in the water. We came back stronger and better— all thanks to your love and support.

“I will miss Terry Jeffords because he IS me. The NINE-NINE will live on forever in my heart and in the hearts of millions of fans around the world.

Charles Boyle actor Joe Lo Truglio added a sweet tidbit when he shared a picture of himself dressed in an Elvis costume.

“On this day, in this ‘stume, I pulled the cast into Holt’s office and said I was going to be a dad. Then found out @melissafumero was about to be a MOM!” he wrote.

Recently a synopsis was released for the final season, reading: “Jake and the squad must try to balance their personal lives and their professional lives over the course of a very difficult year.”