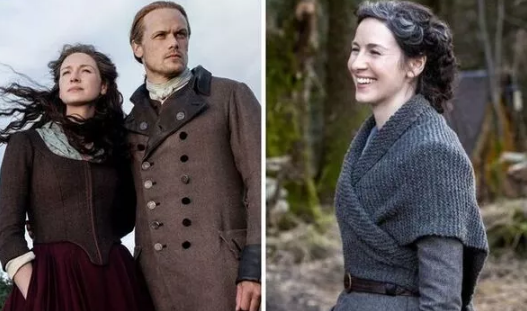 Starz’s time-travelling romance series, Outlander is expected to make a huge return to screens with season seven after a shocking cliffhanger. As the novels the show adapted from continues to be added to, Caitriona Balfe shared her uncertainty about her ongoing portrayal of Claire Fraser.

Outlander first premiered in 2014 and followed the adventures of time-travelling nurse Claire Fraser (played by Caitriona Balfe) as she accidentally transported from 1945 to 1743.

Throughout the series, she navigated through romance and war, and grappled with the evolution of medicine as she stayed in the past to work as a nurse.

Outlander is the on-screen adaptation of a best-selling novel series written by Diana Gabaldon.

As production is currently underway for season seven, Balfe opened up about the possibility of the series continuing to finish the novels.

During her interview with Gold Derby, the actress admitted: “It’s still in the air, I don’t know, it’s hard to look past this season.”

Due to the restrictions surrounding C0VID-19, fans were forced to wait almost two years for season six, which contained only eight episodes.

As a gesture of goodwill to their loyal viewers, showrunners promised season seven would be a big chapter and include 16 episodes.

Balfe cited this as one of the reasons she was unsure about the show’s future: “It’s 16 [episodes] and we have to shoot until February or March of next year.”

She added: “I think once we get through that, everyone will need a breather and see, I don’t know, I can’t tell you more than that.”

While there are nine published books in Gabaldon’s Outlander novel series, the author confirmed she was working on the 10th edition.

She confirmed this on Twitter after a fan questioned whether there was a 10th book available, to which Gabaldon responded: “I’ve barely begun Book 10; it’ll be awhile.”

With the show currently filming its seventh season, it’s likely the upcoming novel will bring an end to Claire Fraser’s journey.

While Balfe remains uncertain about the future of her character, Gabaldon revealed she was extending the Outlander universe with a prequel story.

The book will focus on Jamie Fraser’s (Sam Heughan) history and introduce his parents, who didn’t appear on the show.

Gabaldon told Town & Country: “The other major thing that I’m working on right now is the prequel volume, which is the story of Jamie Fraser’s parents, Brian and Ellen.”

“That one is actively talking to me. I’ve been carrying that one around in my head for quite a while, so I know quite a bit about it.”

She concluded: “I’ve just started serious work on it, you might say. So I have actual scenes, things like that.”

As for season seven, Claire’s innocence was brought to question after she was arrested for the ᴅᴇᴀᴛʜ of her apprentice Malva Christie (Jessica Reynolds).

Although she proclaimed her innocence and was adamant Malva’s ᴅᴇᴀᴛʜ wasn’t her fault, the locals had made their minds up and were taunting her.

Claire and her husband Jamie were forcibly separated as she was sent to ᴘʀɪsᴏɴ, however, the show ended with him on his way to rescue Claire.