In a video released today, Netflix took viewers on a journey of their upcoming slate of content for 2022. Among the seemingly endless second long teasers, fans of Enola Holmes caught a quick look at not only Enola (Millie Bobby Brown) herself, but also that of her older, more famous brother, Sherlock Holmes aka Henry Cavill.

In the clip, viewers see the two walking down a dark street when Cavill looks to the camera and breaks the fourth wall saying, “In here, mystery sparks extraordinary adventure.” To which, little sister Enola steps up to address audiences saying, “The real mystery is why everyone’s talking to them. I thought that was my thing.”

In the first film, which was released to Netflix in 2020, the titular Enola constantly broke the fourth wall to fill audiences in on her innermost thoughts. Throughout the Netflix preview trailer, countless characters take on the technique and share lines to promote their own films. You can see Millie Bobby Brown and Henry Cavill as Sherlock Holmes in Enola Holmes 2 in the clip in full below.

The speedy clip that we see of Enola Holmes 2 gives us two looks at Henry Cavill. In one, Cavill is seen in a full suit, smoking a pipe, seemingly lost in thought. 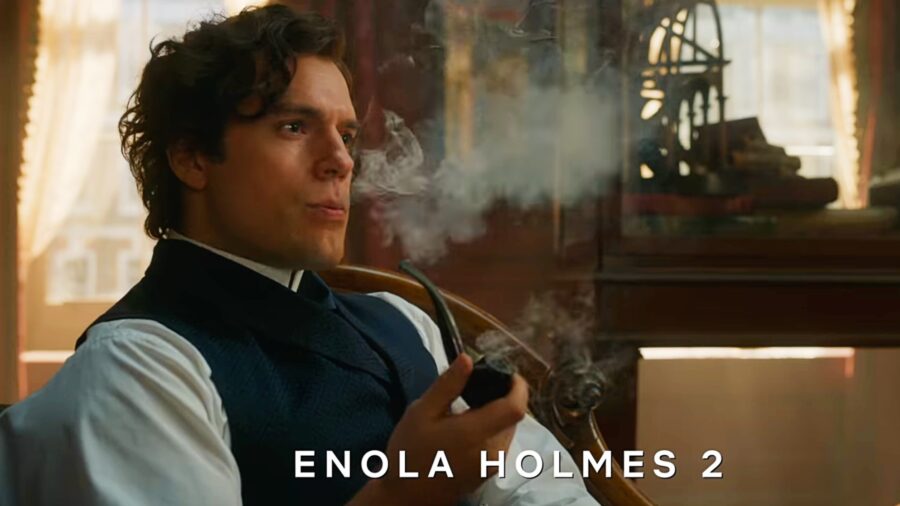 The other is the aforementioned clip of Henry Cavill and Millie Bobby Brown’s characters hustling down the street and talking directly to viewers. Although it was short, the snapshot served to be exciting for those long awaiting the newest installment centered around the young detective’s adventures.

Henry Cavill and the rest of the ensemble cast in Enola Holmes brought longtime fans of the Holmes family a new kind of mystery. Based on the young adult fiction series by author Nancy Springer of the same name, Enola Holmes followed the escapades of the family’s little sister. A curious and brave young lady, Enola heads out on the adventure of a lifetime when her mother, Eudoria Homes (Helena Bonham Carter) goes missing. Her path crosses with a runaway lord and Enola soon finds herself wrapped up in not only one, but two mysteries. With her brothers, Sherlock Holmes and Mycroft Holmes (Sam Claflin) hot on her trail, the teenager rushes against time to solve both mysteries.

Enola Holmes 2 is set to feature many returning cast members including Millie Bobby Brown, Henry Cavill, and Louis Partridge. In the new film, Enola is now a professional detective that has just been tasked with her first case of finding a missing girl. As she seeks to get to the bottom of the disappearance, which appears to involve a dastardly conspiracy, Enola soon finds that she may need to invest in the help of some trusted friends and family.

Outside the detective world of the Holmes family, Henry Cavill has had a long career starring as the leading man in many fan favorite films and TV shows. Currently, the British actor has been gaining a massive fan following stemming from his roles in Netflix’s fantasy series, The Witcher, as well as his take on DC superhero, Superman, in Man of Steel, Batman v. Superman: Dawn of Justice, and Zack Snyder’s Justice League.

With the arrival of these new stills and the short introductory clip to Enola Holmes 2, we can’t wait to see what Henry Cavill and the rest of the crime decoding family have in store for us. What stands to be determined is whether or not the breaking of the fourth wall was just a feature for the Netflix first look, or if Sherlock Holmes and possibly others will adopt Enola’s chats with the audience in the new film. Only time will tell!

My name is Damyan Ivanov and i was born in 1998 in Varna, Bulgaria. Graduated high school in 2016 and since then i'm working on wordpress news websites.
Enola Holmes, Enola Holmes 2, Henry Cavill, Movies, News, Sherlock Holmes