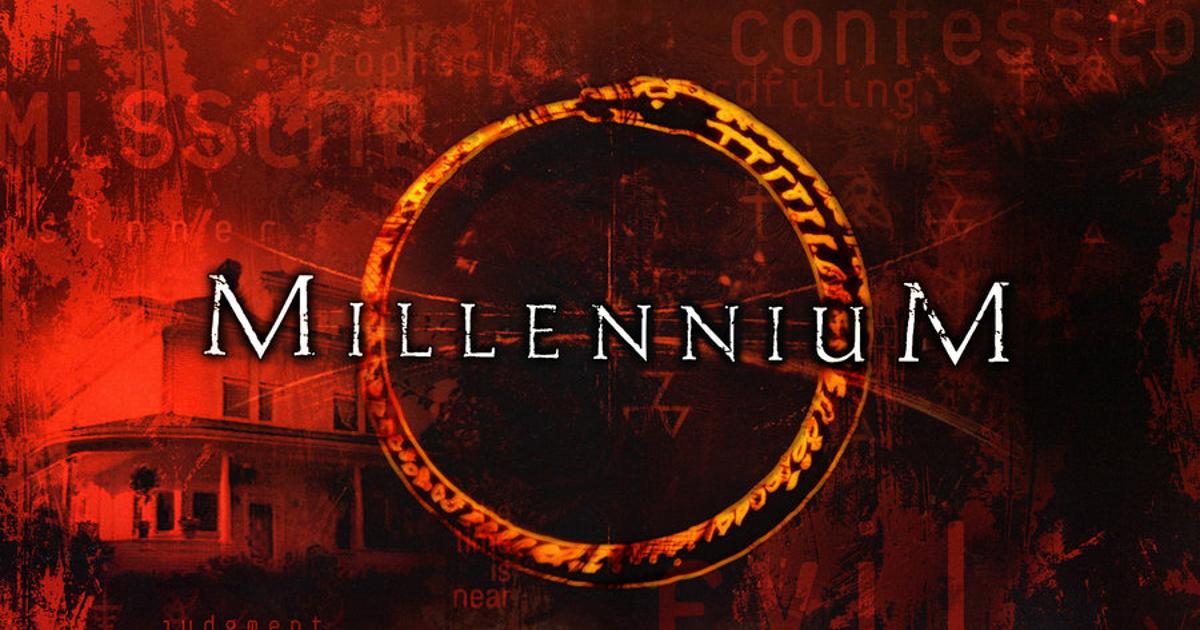 Looking for a new paranormal crime drama to binge? Look no further than ‘Millennium!’

Sci-fi/fantasy genre shows such as Supernatural and The X-Files have been captivating audiences for decades. Between severed heads, alien conspiracies, and “End Times” eschatology, these shows (among many others) keep us on our toes while exploring all things strange and paranormal. So if any of you Mulder & Scully stans and wannabe Winchesters are looking for a new binge after your latest rewatch, look no further than Millennium.

If you haven’t heard of Millennium, it’s because this mystery-crime-thriller was canceled after airing for only three seasons on Fox in the late 90s. The series followed former FBI profiler Frank Black (Lance Henriksen), a man who has the ability to “see into the minds and hearts of criminals,” as he works alongside the mysterious Millennium Group to track down serial killers, sex-offenders, and even the powers of Hell. Although Millennium seemingly begins as “just another crime drama”, it slowly evolves into a genre show that isn’t afraid to deal with demons, ghosts, serial killers, and heavy apocalyptic symbolism as the year 2000 approaches.

Besides being created by X-Files creator Chris Carter and lots of cast and crew overlap from both paranormal staples, Millennium mixed the world of Mulder’s FBI conspiracies and Scully’s skepticism with Sam and Dean’s biblical apocalypse and demonic adversaries (long before the latter was even written) to form something that became darker than either show ever could. Between severed heads, mutilated victims, and doomsday cults, the series would feature things weekly that shows like Criminal Minds only dare show on occasion, with plotlines that better resemble True Detective or Midnight Mass than your average procedural. This darkness derives from not only the subject matter (there are lots of messed-up serial killers here) but also the heaviness that series protagonist Frank Black takes on himself. As Frank continues to look into the minds of the very killers he pursues, it takes a toll on him unlike any other.

What’s more is that Frank’s gift, his nigh-prophetic ability to “see into the hearts and minds” of evil men, gives him an edge somewhat reminiscent of Sam’s prophetic visions from the earlier seasons of Supernatural. This gift, this curse, allows Frank to see his own demons (both figurative and literal) and overcome his worst fears by becoming them. If this show sounds like some sort of existential mental trip, that’s because it often is. “The Curse of Frank Black” in particular dives deep into Frank’s psyche as he’s stalked by a ghost from his childhood (played by Dean Winters). This spirit warns him to forgo his work and enjoy his family, but, in the same spirit of Fox Mulder or Dean Winchester, Frank scoffs at its words.

Those particularly fascinated by The X-Files’ alien conspiracy plotline and the series’ overall mythology will jump at Millennium’s approach towards the impending doom of the biblical “End Times” that, according to many in the Millennium Group, will occur at the turn of the century. As on Supernatural, the mythology especially picks up in the second season (highlighted in the “Owls” and “Roosters” two-parter), where we learn that, much like The X-Files’ Syndicate, not everyone within the Group plays well together. The intricate and complex nature of the Millennium Group makes for some exciting television, making us wonder, along with Frank, who is closer to the truth?

The series’ killer-of-the-week episodes range from completely secular to paranormal, but that’s part of what makes Millennium unique among genre-based television. Millennium often refuses to conform to “genre roles” and continually bridges the gap between reality and fantasy. Episodes such as “Midnight of the Century” or “The Sound of Snow” may involve Frank dealing with loss through interacting with different spirits, while fan-favorites like “The Mikado” are simply about serial killers (in this case, one who puts their victim’s deaths online). While this may seem strange, it’s all very natural as Frank remains our consistent guide through each intense case and unexplained phenomenon.

Fans of The X-Files episode “All Souls” or Supernatural’s “Houses of the Holy,” both of which deal with questions of faith, will especially enjoy Millennium due to the series’ authentic exploration of differing religious and eschatological views. Episodes such as “Maranatha”, which finds Frank exploring a Russian Orthodox Church in search of the possible Antichrist, or “The Hand of Saint Sebastian,” which sends Frank and his partner Peter Watts (Terry O’Quinn) to Germany for an ancient religious artifact, serve as excellent vehicles for the deep, and sometimes dark, questions many of us have about the world. These questions are intricately weaved throughout the series’ narrative in thoughtful ways that reflect Frank’s own curiosity and search for truth.

But what ultimately makes shows like Supernatural and The X-Files great, spanning over decades and heavily influencing different shows today, are the character arcs and interactions that make us continue to come back for more. Sam (Jared Padalecki) and Dean (Jensen Ackles) have a brotherly bond that can never be truly broken as they constantly put their family before everything else. Mulder (David Duchovny) and Scully (Gillian Anderson) share a passion for the truth, even if they come to varying conclusions on what that is, which brings them close professionally but eventually extends to their personal lives as well. They couldn’t be without each other. Millennium shares similar themes.

Frank’s wife Catherine (Megan Gallagher), a social worker who helps on various cases, and their daughter Jordan (Brittany Tiplady) are the center of his world. Time with the two of them in their sacred yellow house ground the series in family. The house itself serves as an anchor that keeps Frank sane in an increasingly insane world, and it’s here, in “The Pilot,” where Catherine reminds him that he can’t protect them from every evil. Solemnly, he responds, saying, “I want you to make-believe that I can.” This reminds us that Frank is not just some depressed lawman, but a loving husband and father who will stop at nothing to defend his world. Though he doesn’t always succeed, it doesn’t stop us from make-believing he can.

Characters like The X-Files’ Cigarette-Smoking Man (William B. Davis) or Supernatural’s Lucifer (Mark Pelligrino) have become iconic characters, setting the bar for genre show villains everywhere. Well, if you were worried that the countless serial killers wouldn’t be enough to foil Frank for long (you’d be right), meet Lucy Butler (Sarah-Jane Redmond). Lucy is Frank’s archnemesis who turns out to be a demon (nicknamed “Legion” by fans) more terrifying than some of Supernatural’s worst put together. Appearing in different forms each season, Lucy terrorizes and stalks Frank in ways no other creature could. From killing his close friends to targeting his daughter, Lucy’s sensual and predatory nature makes her one of the biggest, and most complex, threats that Frank could ever face. Episodes such as “Lamentation” and “Antipas” will shock you to your core, as Lucy’s merciless prowess seems to gain the upper hand. While Frank may come out on top, he doesn’t always win in the process.

But don’t worry, not every episode of Millennium is “doom and gloom;” in fact, there are some really funny gems in there. If X-Files episodes like “X-COPS” and “Bad Blood” or Supernatural’s “Fan Fiction” and “Hollywood Babylon” are more your speed, then prepare for some wacky episodes of Millennium as well. “Jose Chung’s Doomsday Defense” (a semi-X-Files crossover) is a hilarious poke at Scientology through, get this, “Selfosophy”. The Season Two episode “Somehow, Satan Got Behind Me” (a personal favorite) follows four devils as they sit around a donut shop explaining to each other their techniques for tempting human souls. It’s a pretty hilarious oddball take on C.S. Lewis’ “The Screwtape Letters.” And if that’s not enough, the Season Three episode “…Thirteen Years Later” follows Frank and his partner Emma Hollis (Klea Scott) as they track down a serial killer on a horror film set during Halloween. What makes this episode especially weird (besides the wacky ending) are the cameos by members of the rock band KISS, who were promoting their latest album Psycho Circus at the time.

While Millennium was canceled after its third season, the impromptu series finale “Goodbye To All That” truly serves as a solid ending for Frank Black’s journey, but if you’d like an epilogue, he also appears in The X-Files Season 7 episode aptly titled “Millennium”, where he ushers Mulder and Scully into the 21st century after foiling a Night Of The Living Dead-esque plot. The episode feels a lot more X-Files than Millennium and is somewhat divisive among fans, but there’s no denying that it’s fun to see Frank interacting with the Bureau’s most famous duo.

In years past, series star Lance Henriksen has expressed interest in returning to the role of Frank Black, as have many members of the cast and crew. While nobody knows if the series will ever return, this forgotten ‘90s classic has been beloved by a strong cult following for years, inspiring various books, podcasts, and even an award-winning documentary. Millennium is a unique show to be sure. It’s not quite a police procedural, nor does it fully commit to being a genre series, but Frank Black still manages to pull in audiences who love both. If you’re a fan of the “family business” of Supernatural, the conspiracies that started The X-Files, and the paranormal and eschatological elements of both, you should definitely give Millennium a go!