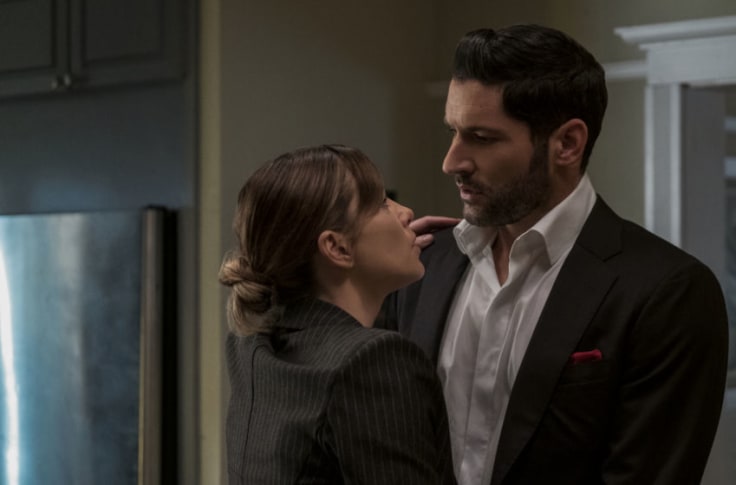 ATTENTION!!! This article contains spoilers for the LUCIFER season 5 finale.

During the final episode of Lucifer season 5, “A Chance at a Happy Ending”, Michael (Tom Ellis) arrives at Lux with an offer for Lucifer (also Tom Ellis). The loss of Dan Espinoza (Kevin Alejandro) still fresh in his mind, Lucifer lashes out at Michael when he suggests that Lucifer could get his old job back as the Hell’s king, but having assembled the Flaming Sword and with the angels on his side, it appears that Michael will be victorious in his efforts to rule Heaven.

Michael tries force Lucifer’s hand, saying that Chloe’s guilt over Dan’s death – which Michael ordered his men to carry out – means that she will go to Hell, too. If Lucifer wants to be with Chloe forever he’ll agree to return to Hell to keep her company. Michael says this is Lucifer’s chance for a happy ending, but Lucifer certainly isn’t about to go down without a fight.

He meets with Chloe and admits he’s been going about his quest to be God all wrong. The thought of Dan in Hell and Chloe set to join him as soon as her fragile mortal heart stops beating has helped Lucifer understand that the situation is much more complex than he realized. After Chloe explains to Lucifer that she can’t simply stop feeling guilt over Dan’s death, her guilt is compounded when she discovers that Dan’s soul is now suffering in Hell.

Remiel arrives and interrupts the heart-breaking scene but dies almost immediately. Chloe and Lucifer realize from examining Remi’s wounds that Michael hasn’t yet constructed the Flaming Sword. He is still missing at least one piece: Amenadiel’s necklace, which includes the key that locks Azrael’s Blade and the Medallion of Life together to create the Flaming Sword – the most powerful weapon in the universe. Lucifer tracks the necklace to TJ the fence, but Michael snags it.

What Was Lucifer’s Plan to Fight Michael?
The episode is chock-full of thoughts from various characters about standing up after a fall, and accepting death while fighting for the greater good even if it means making the ultimate sacrifice, and we see Chloe and Lucifer both accept this journey in the Season 5 finale.

When Lucifer tries to reason with the angels on Michael’s side, he is virtually unsuccessful. Michael suspects that the angel vote might have to be unanimous to install himself on the throne, and a fight breaks out between Lucifer’s crew and Michael’s angel cohort. Even with Mazikeen, Amenadiel, Chloe, Eve, Zadkiel and a whole bunch of newly Hell-sent souls from a crashed prison transport on his side, Lucifer can’t quite beat Michael. After all, Michael has the Flaming Sword, which is capable of killing Lucifer and anyone else that stands in his way.

But Lucifer and Chloe have a plan. While Lucifer fights Michael, Chloe will dart into the fight and rip the key from the sword, disabling it and giving Lucifer a chance to steal it. Meanwhile, Lucifer picks up Azrael’s blade, only to see her suddenly appear at his side. With Lucifer distracted for a brief moment, Michael runs Chloe through with Zadkiel’s staff, killing her.

Mazikeen snaps, and a war breaks out between the angels and demons.

How Did Chloe Come Back to Life?
As Chloe lies dying in his arms, she tells Lucifer that they all made an individual choice to be in the fight one way or another, and knows that she isn’t really responsible for Dan’s death.

As Chloe no longer feels guilty about Dan, her soul ascends to Heaven when she dies at the hands of Michael. Naturally, Michael feels very smug about this turn of events, because he knows that Lucifer can’t follow Chloe to Heaven or he’ll die. Those were the terms of Lucifer’s original banishment, and the Devil understands this when he decides to sacrifice himself to bring her back.

My name is Damyan Ivanov and i was born in 1998 in Varna, Bulgaria. Graduated high school in 2016 and since then i'm working on wordpress news websites.
Lucifer, lucifer 5, lucifer 5B, Lucifer finale, Lucifer Season 5, Lucifer season 5b, Spoilers, TV Series