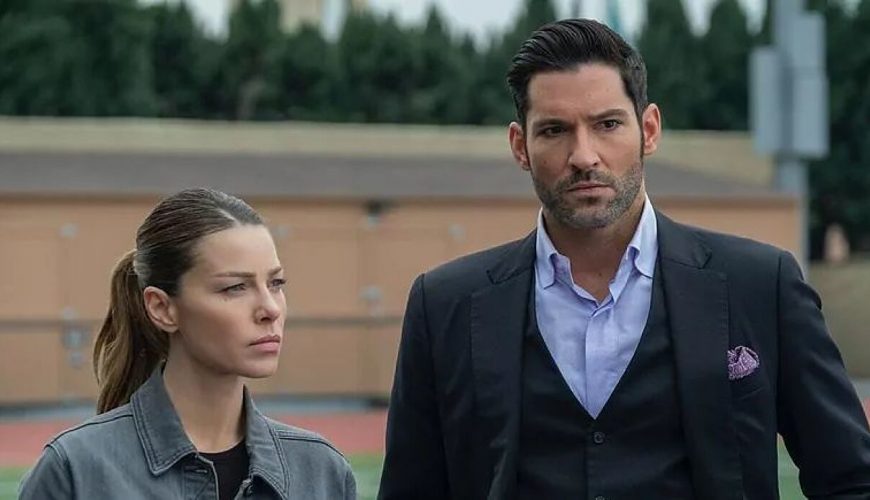 Lucifer Season 6 Episode 3
“How do you help somebody who’s in Hell?”

Unlike the series’ titular character, Lucifer showrunner Joe Henderson clearly embraces taking risks with his Netflix fantasy series. Having successfully navigated the potential pitfalls of a musical episode, Henderson brilliantly adds animation to the show’s resume with the delightful, yet insightful “Yabba Dabba Do Me.” However, it’s the episode’s bombshell conclusion that promises to take Lucifer on an emotional journey he did not expect to have to confront.

The opening camera shot reveals Linda’s in progress manuscript, Sympathy for the Devil: My Time with Lucifer Morningstar, and as Lucifer barges into her office, it appears we’re about to begin an exploration of the doctor’s thoughts and feelings relative to her time as a member of the celestial family. But the scene merely serves as a jumping off point for Lucifer to continue his journey of self-discovery and make the decision to return to the murder investigation that brought Team Lucifer together in the first place.

It’s always fun to hear Chloe talk about her future as God’s consultant, and when he informs her he’s going to Hell to help murderer Jimmy Barnes, her response is not only expected but significant. “When do we leave?” Chloe’s not about to sit around and wait for her man, and her fearless approach to entering the place where the damned must live out a tortured eternity shows a lot about her growth. Neither forget that it was Barnes who shot and nearly killed the detective during that initial murder investigation.

Time loop, Hell loop – the potential for a story to go off the rails increases whenever writers employ these devices, but the judicious use of the pair’s time in Hell coupled with the exquisitely executed animated sequences provides a chance for Lucifer to find what he’s been looking for. Amidst the pale blue lighting of Hell, Lucifer tells Chloe that “Every Hell loop is different so we could be in for anything,” and we’re reminded that this version of Hell is far different than the traditional fire and brimstone interpretation. It’s never explained how or why Jimmy’s Hell loop door has been moved, but once Lucifer and Chloe enter, the Devil takes what may be the first step toward finally committing to his new job.

We eventually learn the reason Jimmy’s Hell loop employs all the traditional Saturday morning cartoon elements, tropes, and stock characters found in countless Hanna-Barbera animated shows. And while it’s a ton of fun watching Lucifer fret about his missing penis and Chloe kick the crap out of the traditional, stylized version of the Devil, the takeaways for Lucifer are even more significant. Once he learns that caring about someone like Jimmy isn’t all that difficult, we know Lucifer’s getting closer. “If I can care about anyone, then I can help anyone,” he tells Chloe and thinks he’s ready to be God. Through his attempt to help Jimmy, Lucifer develops true empathy for others outside his circle which marks a huge turning point for him.

The frog falling from the sky at the end of the last episode now begins to make sense, and when Lucifer finds Ella puzzling over the creature’s meaning, it sets up the mystery angel’s big reveal. The universe is, in fact, in trouble, and we have to wonder whether Dan’s role in this matter will ultimately lead to his salvation. Despite everything, he’s come to realize that at his core, Lucifer is good and deserves Dan’s support and loyalty. In that one moment in the penthouse when Lucifer strides out of the elevator, Dan’s warning should be enough to earn him a reprieve from his Hell sentence. It’s heartfelt and honest, and while it doesn’t prevent Lucifer from being attacked, it should count for something.

Before we break down this crucial encounter, however, Amenadiel’s first day of LAPD field training bears examination. Hopefully, we’ll get to see more of Merrin Dungey as Amenadiel’s gruff training officer Sonya Harris, but when their first encounter with a criminal turns out to be Mazikeen, the exchange doesn’t go as expected. Naturally, Amenadiel assumes Maze wants to mock his desire to give back to the community, and when Officer Harris tells her charge “once a criminal, always a criminal,” it appears he’s going to have a rocky start to his career in law enforcement. But in a wonderfully written twist, Harris takes Maze to a women’s shelter in the hope that a second chance may be all she needs, and we know Amenadiel has been paired with the perfect mentor.

Lucifer earlier helps Jimmy deal with his feelings of abandonment, but now comes face to face with a young woman intent on revenge “for what you did to me.” To this point, the natural assumption is that she is one of Lucifer’s celestial siblings, but he immediately dispels that notion, setting her up for a huge cliffhanger. “I’m your daughter.”

We’re now venturing into unexplored territory since Lucifer’s virility has never been in question. Because Lucifer’s daughter appears to be a full blown angel, we must consider that her mother is also an angel. We really haven’t heard of any heavenly dalliances other than his brief affair with Eve who actually isn’t even a celestial. Yes, the angel Amenadiel and human Linda produce Charley, but his status remains unclear. All of this assumes that we believe she’s telling the truth. Are their DNA tests for celestials?

“Yabba Dabba Do Me” moves Lucifer one step closer to his dream job, but with three quarters of the season still to go, he’s clearly going to have to overcome obstacles out of his control. Perhaps next time we’ll get a name to go along with the wings, but until that happens, Lucifer may have some splainin’ to do.

My name is Damyan Ivanov and i was born in 1998 in Varna, Bulgaria. Graduated high school in 2016 and since then i'm working on wordpress news websites.
Lucifer, Lucifer 6, Lucifer finale, Lucifer Season 6, News, Spoilers, TV Series