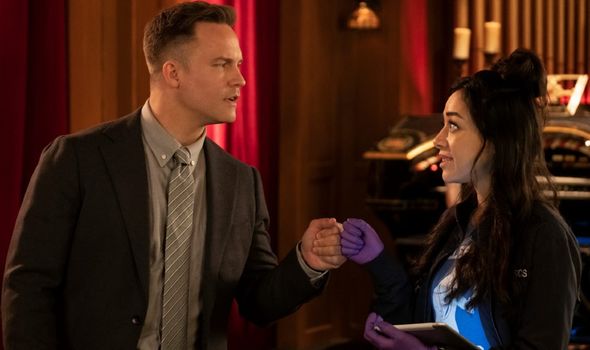 ‘Lucifans’ have been treated to an extensive collection of screenshots from the Netflix phenomenon’s highly anticipated last hurrah. With Lucifer season six just around the corner, viewers have been wondering what’s next for Ella Lopez (played by Aimee Garcia) and newcomer Carol Corbett (Scott Porter).

Official images from the sixth season of Lucifer could rule out a possible romance between Ella and new character Carol Corbett.

Friday Night Lights star Scott Porter joined the cast of Biblical drama at the end of the fantasy show’s fifth instalment as a potential love interest for CSI Ella Lopez.

Porter will portray Carol Corbett, a new detective in town who’ll be filling the gap left by Chloe Decker (Lauren German) after her retirement. Despite quitting the LAPD at the end of the latest season, Chloe and Lucifer (Tom Ellis) seem to be working on another case in the upcoming premiere.

Although Lucifer has now inherited the powers of his father, God (Dennis Haysbert), the devil will still need some help to crack the toughest murders in Los Angeles.

Enter Carol Corbett, who was introduced by Detective Dan Espinoza (Kevin Alejandro) as a potential suitor for adorkable CSI Ella Lopez shortly before his death.

Carol and Ella first met at their mutual friend’s funeral, so their possible courtship has already gotten off to a rocky start.

Now, a selection of stills from the upcoming season seems to confirm the pair won’t be dating at the start of the new season, and may not ever start.

The new LAPD detective will join the core team in the opening episode, ‘Nothing Ever Changes Around Here’.

Little is known about the season six premiere, though the first images suggest Chloe, Lucifer and Carol will team up to take down a criminal named Alan (Chris Coy).

Carol immediately establishes himself as a worthy successor to Dan Espinoza as he steps into action to save Chloe from a hostage situation. He’s then seen exchanging pleasantries with Ella in the form of a polite fist bump. Although the duo already seem to have become friends, their interaction here still seems a little too awkward to constitute anything close to sexual chemistry.

Plus, Ella’s expression when greeting the new detective takes the form of a strained smile, suggesting they haven’t exactly become the closest of friends during Carol’s time at the LAPD so far.

These clues could spell bad news for fans who have been desperate to see Ella find love ever since her horrific experience with Pete Daily (Alexander Koch) in the last season. Of course, the last season will consist of ten episodes to bring Lucifer to a satisfying conclusion, so there’s still plenty of time for their relationship to develop.

It’s still unclear how soon after the latest thrilling season finale season six will pick up.

If there’s only a short time jump after Lucifer is granted his godly powers, this image may have just revealed the very early stages of Carol and Ella’s friendship.

Thankfully, Netflix have confirmed subscribers only have just over a month to wait until they find out how it all ends for Lucifer and his friends.