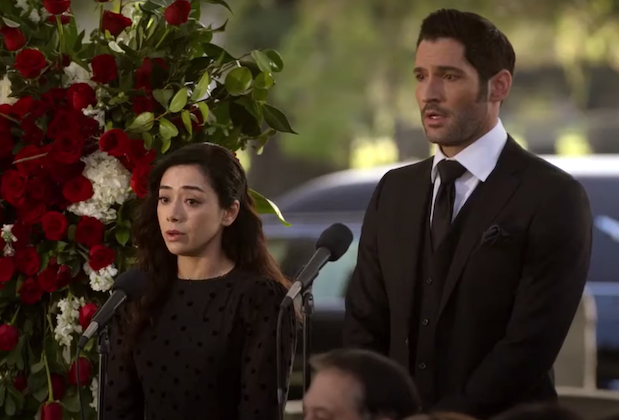 When Lucifer Season 5 held a funeral for a long-running character, it was Aimee Garcia who was nearly done in — by the preparation for her duet with Tom Ellis.

As part of her Season 5 post mortem interview with TVLine, Garcia recalled the musical journey that was Episode 15. “I was asked, like, ‘Hey, will you sing at Dan’s funeral?’ And I said, ‘Look, I basically had a panic attack singing for the musical episode, but as long as you give me enough time, I can do it.’”

Garcia was originally told she’d have at least a month to prepare, but a change in scheduling fast-tracked filming of the funeral. “Cut to: Hey, Aimee, can you sing this song next week? And I was like what?” she shared. “I was totally freaking out. But I said, you know what? This isn’t about me. Put your ego aside, Aimee! This is about the story, the fans, and this is Ella singing. She’s not a professional singer, and she’s basically doing this as a prayer to someone she loves and misses.”

Garcia promptly met up with vocal coach Valerie Morehouse, only to then be told, three days before shooting, that the originally planned song, Leonard Cohen’s “Hallelujah,” didn’t clear. Meaning, she and Ellis would now have to learn a new song — the Boyz II Men version of “It’s So Hard To Say Goodbye.”

“I full-on freaked out,” she recalled. Ellis offered to be in the booth with his anxious costar as she pre-recorded her vocals, but Garcia said she instead “just sucked it up and learned the song,” listening to it on a veritable loop for the next 48 hours. “I went in the booth and full-on froze, but then I just took a deep breath and was like, ‘You know what, this is a beautiful tribute to a beautiful character, and just make it about that. This isn’t American Idol, there are no judges.”

Amazingly, amid all this, Garcia upped the ante herself at one point by asking to translate much of her half of the duet into Spanish, since both Dan and Ella are Latino. Showrunners Ildy Modrovich (who also directed the episode) and Joe Henderson, plus writer Jason Ning, all signed off on the fitting flourish.

“I will never forget them letting me sing in Spanish,” Garcia said. “They said that when they played the song for people, that all of the background artists and the crew were crying. So while I am no Kelly Clarkson, they gave me a challenge and I just did my best, to sing this as honestly as I can. Because this isn’t about me. It’s about our fans, and hopefully people realize it’s a beautiful tribute to a friend.”

Netflix’s Lucifer returns with its sixth and final season on Friday, Sept.10.