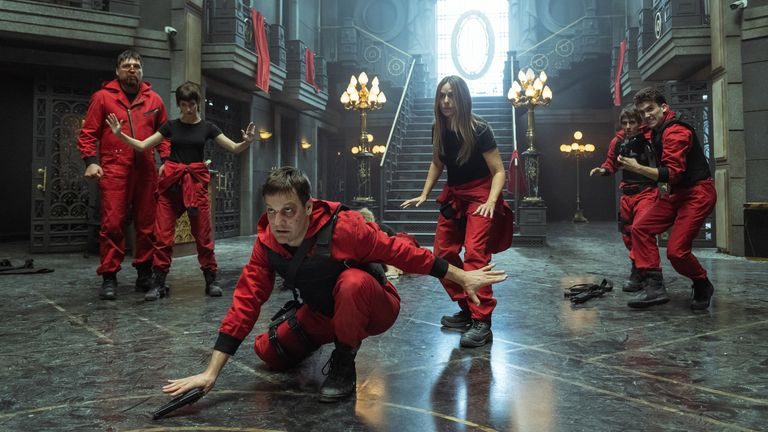 Fans might have expected the season four finale to follow the same format as season two, neatly wrapping up the heist after just two seasons. But nothing seems to have gone to plan this time around, and the gang have been forced to buy themselves a bit more time.

That means season four ends on a cliffhanger, which left the door wide open for a potential Money Heist season five.

Money Heist has shot in Spain, Denmark and Portugal, with the final series consisting of 10 episodes.

Here’s everything you need to know.

Money Heist season 5 release date: When will it air on Netflix?

Heists are often full of twists and turns and the final season of Money Heist is no different. For the last chapter, Netflix has decided to split the story into two separate volumes, and both will have a slightly different tone.

Álex Pina, the show’s creator, explained the reasoning behind this in an official statement:

“When we began to write Part 5 in the midst of the pandemic, we felt that we had to change what was expected from the ten-episode season and used every tool we could to create the sensation of a season finale or series finale in the first volume itself. We decided to work in an extremely aggressive genre, putting The Gang on the ropes. In volume 2, we focus more on the emotional situation of the characters. It is a journey across their sentimental map that connects us directly to their departure.”

While we’re waiting for the new episodes, there’s always Money Heist: The Experience, an immersive theatre production that’s launching in November in an “iconic” London location.

Each show will last between 60 and 75 minutes, and you’ll also be able to don original costumes and masks from the series.

Money Heist season 5 cast: Who will be in it?

Netflix has revealed who we can expect to see in season five, and there are some new faces joining the gang.

But obviously, Nairobi (Alba Flores) will not be back, which she did give hints about.

“If you’re going to watch it, keep your tissues close to you,” she said (via Oprah Daily). “This season is tough — tougher than you think it will be at the beginning.”

“We’re already seeing one of the consequences of Nairobi’s death,” Pina said (via Entertainment Weekly).

“[She is] still very present, sometimes they still talk about her. She is illuminating their struggle in this last season.”

Executive producer Jesús Colmenar added: “Nairobi represented the heart of the gang in a way, and in this last season [she] would have had a hard time fitting in because this is a season of direct confrontation. But her legacy is going to inspire the other characters.”

Prior to Nairobi’s involvement, Flores revealed that there was just one other female character on the show.

“They were writing the script for La Casa de Papel, and they realised that there was just one female character, Tokio,” she said (via Oprah Mag). “And they thought, ‘This is not going to work.’ So he called me and asked if I wanted to come be on his new TV show and offered to send me the script for the first two episodes. He said, ‘If you like it, I can write a role for you.’ And that’s how Nairobi was born.”

“[This season] is very different from all the previous seasons, and we have put all our eggs in one basket to go out with a bang,” Colmenar told EW.

“The romantic and feel-good idea of a robbery without victims, of a struggle for freedom and resistance but without hurting anyone, smashes into the wall of reality in this last season. From now on, the characters will have to fight for their lives.”

Pina added: “This season is one of total destruction.”

Pedro Alonso echoed that (via Pinkvilla, as reported by Republic World), describing season five as a “war movie but within four walls”.

Like every season of Money Heist, season five will catch up with The Professor and the gang doing what they do best: armed robbery of the highest degree, with a smattering of political resistance thrown in.

Following the release date announcement, Netflix released an official season five synopsis which you can read below in full:

“The gang has been shut in the Bank of Spain for over 100 hours. They have managed to rescue Lisbon, but their darkest moment is upon them after losing one of their own. The Professor has been captured by Sierra and, for the first time, doesn’t have an escape plan. Just when it seems like nothing else could go wrong, an enemy comes on the scene that is much more powerful than any they’ve faced: the army. The end of the greatest heist in history is approaching, and what began as a robbery will turn into a war.”

And we have some brand new photos to get excited about, too, which hint at lots to come in the upcoming chapter.

There are a number of loose threads left dangling at the end of season four that future episodes could explore.

Lisbon is now inside the bank, but with The Professor cornered by Inspectora Alicia Sierra, Lisbon and the others have no way to escape. They’ll have to continue melting gold at top speed and hope that Sergio can find a way to outsmart Sierra once and for all.

“Seeing Lisbon with the red jumpsuit in charge of the heist and in constant communication with The Professor is totally new,” Colmenar told EW.

Out in the world, The Professor will be having a tough time. “The whole approach of this season was to smash The Professor with a technical KO,” Pina said. “And the more blows he received, the better.”

And is Álvaro Morte hinting there could be problems ahead for his character? “The Professor is very intelligent in some aspects, but not in all of them. I believe he has great planning skill, and also in terms of strategy, but – for example – I think he’s one of the clumsiest guys on earth when it comes to emotional intelligence.”

Chatting about the character development of The Professor, Morte said (via Identity Magazine): “With Raquel, The Professor has always been alone; with no love, no relationships, no partners. Just planning by himself. And suddenly, he’s not alone.]

Morte went on to discuss the moment in season three when The Professor heard the gunshot that killed Raquel: “He hears the shot and it comes like an arrow to his chest, and he’s even more shocked as he hears the second shot and then falls to his knees while making this strange face that’s full of horror – but without even being able to cry.

“And that’s when something changed in him and you can see it as he tells Palermo that the war has begun.”

Anyone who stuck around to watch the credits might have noticed that the resistance anthem ‘Bella Ciao’ can be heard playing at the end. The song is full of themes that have played an important role throughout the series, but what’s even more important this time around is who’s actually singing it.

Oprah Magazine points out that actress Najwa Nimri is singing a cover of the tune, just a few seconds after the credits start to roll. Before that, the only characters heard singing this song are those who fight alongside Berlin and Sergio, representing a kind of induction to their cause.

So does this mean that Alicia will join the group in season five?

While this could just be a coincidence, the fact that Nimri also delivers the last line of dialogue right before the credits makes the connection seem more deliberate than that.

Although some fan theories suggest that Alicia could secretly be Tatiana, Berlin’s wife from those recent flashbacks, that seems like more of a stretch. Sure, the two women look similar, but Tatiana is played by Diana Gómez, not Nimri.

Still, we shouldn’t rule out some kind of relationship between the two. After all, Money Heist hasn’t shied away from surprise family reveals in the past, which means that Alicia and Tatiana may be closely connected after all.

Either way, don’t be surprised if Alicia joins the cause in season five, switching up the dynamics of the show completely.

But it’s not just the ongoing plot that could change either. Like the Fast & Furious or Power franchises, there’s scope for whole worlds outside the main show itself and the creators have seemingly embraced those possibilities whole-heartedly. Pina told Oprah magazine: “We do have many possibilities for some spinoffs, yes, and I think that’s thanks to the strong and powerful identities of the characters.

“We’ve always looked for characters to have a very complex, layered design. So I think almost every character of Money Heist has a duality that we would like to see in a spinoff. We could watch any of them in other contexts.

“I think Arturito could have a black comedy. Berlin’s case for his own show is very clear – he’s a misogynist, a psychopath, egocentric, a narcissist, a delinquent, a rapist… but still there are lots of people who adore him, because he values friendship, loyalty or fraternity.

“From Nairobi to El Profesor… Denver is yet another character with his own charm. I would love to write all of them as spinoffs!”

Pina was prepared to give away some of the key plot elements (via EW): “We are moving from a chess game – a mere intellectual strategy – to a war strategy: attack and contention.

“We always try that our opponents be charismatic, intelligent, shiny,” he added. “In this case, in pure war film genre, we also look for characters whose intelligence can measure up against The Professor’s.”

He continued: “Adrenaline is within Money Heist’s DNA. Every thirty seconds things take place and disrupt the characters, a turn of the screw to the action. The adrenaline mixed with feelings arising from absolutely complex, magnetic, unforeseeable characters will continue until the end of the heist to the Bank of Spain.

“However, the gang will now be pushed into irreversible situations, into a wild war: it is the most epic part of all the parts we’ve shot.

“It is action and feeling, it is black comedy and drama, romance and pathos.”

Sounds good to us.

Money Heist season 5 trailer: When will it land?

It’s likely that a marketing teaser promo will be released ahead of a real sneak peek, just to keep us on the edge of our seats. And that’s probably coming soon now that the official release date has been confirmed.

If we had to guess, we’d say expect some new footage towards the end of August to hype up Volume One’s release on September 3.