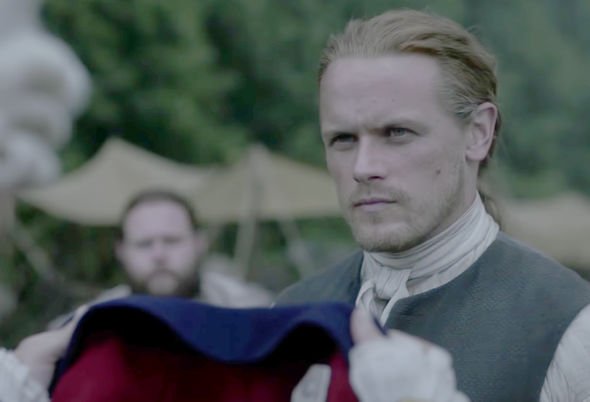 The fifth season of Outlander saw Jamie Fraser (played by Sam Heughan) make several difficult decisions regarding his family. He was told by Governor Tryon (Tim Downie) he had to hunt out Murtagh Fitzgibbons (Duncan Lacroix) despite the pair being related.

Jamie struggled between his duties to the British army and his family. One particularly difficult moment saw Jamie being ordered to put on a Red Coat so he could be recognised as part of the British army during the Battle of Alamance, something he felt incredibly uncomfortable about.

Jamie had to be forced by Governor Tryon to put on the uniform despite his pleas to keep it off.

Discussing the storyline, Maril and Matthew shared how they ensured Jamie put on the red coat despite not wanting to see the character betray their beliefs.

Maril explained: “Another key thing in this episode is Jamie putting on the red coat.

“We had a lot of discussions of ‘He would never put on a red coat, that’s not who Jamie is.’”

“There was a lot of feelings on the matter of what Jamie would do and we decided Jamie could not put on the red coat,” Matthew continued.

“Jamie had to be forced to put on the red coat.”

Maril added: “You get so invested in these characters that sometimes you have tunnel vision of storytelling and what characters you think would do and not do.

“Sometimes, that minor adjustment of yes, Jamie being forced to put it on as opposed to Jamie willingly putting it on is a subtle difference but it means everything.”

The biggest test for Jamie will come when the British army prepare for the Revolutionary War – will he side with the English or the Americans?

The war is expected to be covered in season six, which recently wrapped filming.

Teasing what is to come for his character Jamie, Sam teased it was a “small but mighty” season.

“I think shooting through a Scottish winter during a pandemic, it was weird.

“We would go to work, especially at the start, and we didn’t know what was going to happen.

“ I’d just finished a movie in London which had similar protocols.

“But to be in Scotland and to see no one on the roads driving to work — and just to be in this world where it felt like we were the only people at work — it was kind of crazy.”

Sam added he is “really pleased” with season six and it “feels almost like early Western vibe”.

“And, you know, we’re building to the War of Independence,” he warned.

“Obviously, there’s time travel as well and all the other elements. It feels like a small, but mighty season.”

Fans have a long wait on their hands unfortunately until they find out what Jamie decides with regards to the Revolutionary War but its likely he will side with those who need him most.

My name is Damyan Ivanov and i was born in 1998 in Varna, Bulgaria. Graduated high school in 2016 and since then i'm working on wordpress news websites.
Jamie Fraser, News, outlander, storyline, TV Series