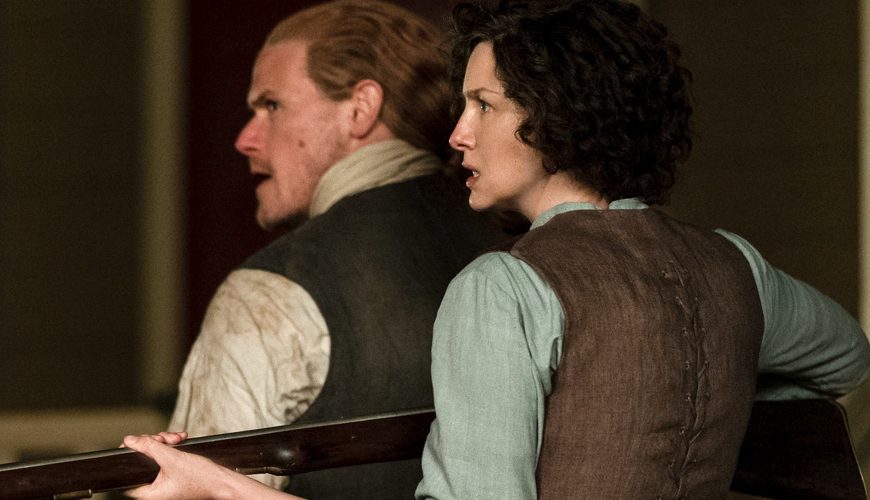 Sam, who plays Jamie Fraser, and Caitriona, who plays his wife Claire Fraser in the Starz time travelling drama, both starred in the concluding episode of Outlander season six.

In a chat with Entertainment weekly they’ve now revealed what it was like shooting the final episode of season six, which saw them fight for their lives

Talking about the episode, Sam said: “Claire — or Caitriona — is pretty good at loading rifles, and also a pretty damn good shot.

“It’s sort of them against the world, right?

“They’re a good team, and it’s fun to see them now literally fighting people off to protect their home. It’s the first time we’ve done action together.”

Caitriona also revealed she inhaled some gun smoke accidentally, which wasn’t too pleasant.

She said: “It’s the first time I’ve ever smoked a gun, unintentionally.

“Note to self: when you fire and there’s a flash in the pan and you’ve got all this smoke going up, don’t inhale at that moment because you literally will smoke the gun. “

The pair also spoke about season seven, which has already begun filming in and around Scotland.

She added: “We have some amazing actors that have come in. I don’t know what we can say. Usually we get a list of, “Don’t say this and don’t say that,” but nobody said anything. Maybe we can just say everything right now.

Sam agreed: “It’s going very well. And it feels really positive. It feels like a really strong start. So there’s a lot to look forward to.”

Caitriona also told fans there would definitely be a conclusion to some of this, with ‘some of these threads tied up early on.”

My name is Damyan Ivanov and i was born in 1998 in Varna, Bulgaria. Graduated high school in 2016 and since then i'm working on wordpress news websites.
Caitriona Balfe, News, outlander, Outlander 7, outlander season 7, Sam Heughan, TV Series