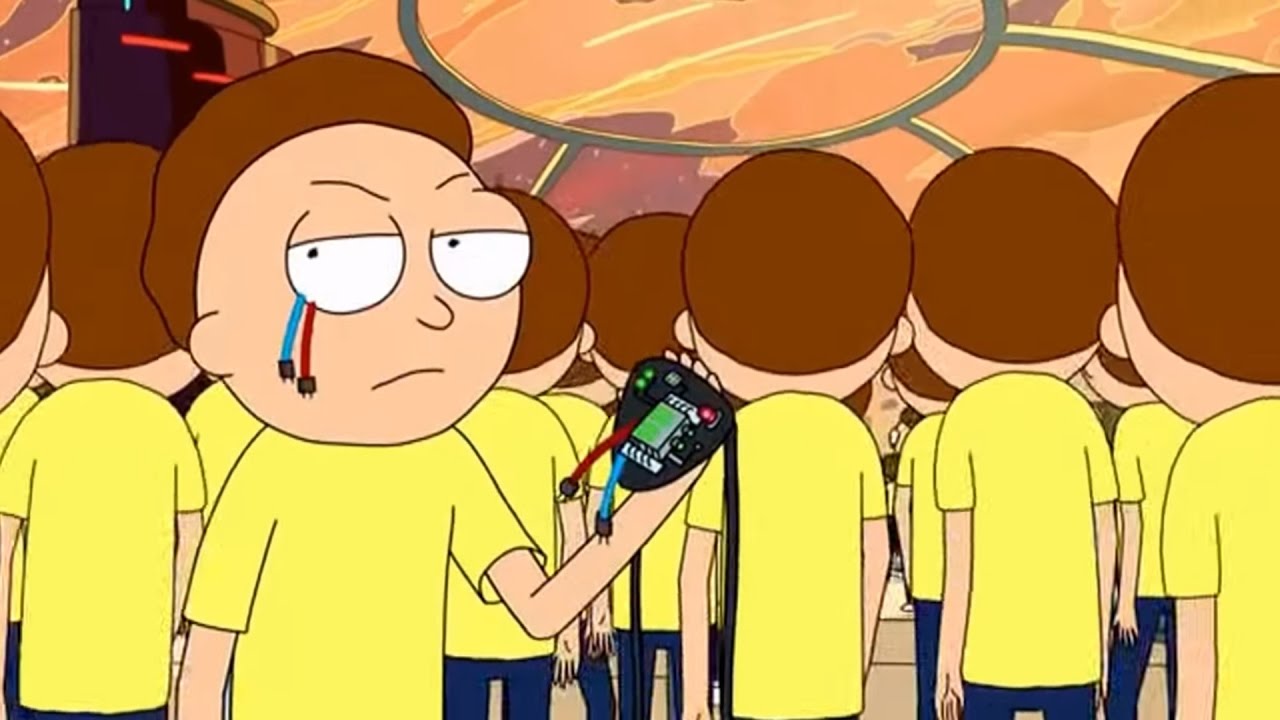 Among all of the dragons and squanchy space snakes soon heading our way, Rick and Morty has also teased the return of Evil Morty in season four.

Last time we saw the villainous double was back in season three’s standout episode, ‘Tales From the Citadel’, where Evil Morty became the Citadel President.

Since then, it feels like fans have been waiting to find out what happened to him next even longer than Rick has been trying to find his beloved Szechuan sauce. Fortunately, season four is closer than ever, and the team behind Rick and Morty have now teased Evil Morty’s imminent return via their official Twitter account:

Black and white and dread all over. @adultswim pic.twitter.com/b4ytmXpt6o

Among an endless sea of clones, Evil Morty can be easily spotted thanks to those distinctive wires sticking out of his eye. The caption that accompanies the picture reads “Black and white and dread all over,” which hints that Morty’s villainous double will definitely play a role in season four.

However, if fan theories are to be believed, then Evil Morty has actually been in Rick and Morty this whole time, since the very first episode in fact.

As fans already know, Rick and Morty updates its opening sequence every year to include brief glimpses of new adventures, each more schwifty than the last. However, there’s one scene in particular that’s been kept in each season, and that might be because it’s far more significant than anyone first realised.

At the beginning of the opening credits, there’s a moment where Rick and Morty are running away from a monster. So far, so good, but then Rick escapes by using his portal gun and accidentally leaves Morty behind, about to face certain death – or so we thought.

Over the years, a number of fan theories have popped up claiming that this version of Morty we see is actually Evil Morty and his near-death experience here is what inspired him to become evil in the first place.

Most versions of the theory argue that Evil Morty is in fact the original Morty Rick knew first in his home dimension, and that’s why the first episode establishes that Rick is returning after a long absence. He left for such a long time because he thought himself responsible for the death of his own Morty.

What Rick doesn’t know is that the original Morty survived somehow, growing resentful of his grandfather, and he’s been plotting revenge against all Ricks ever since. This would also explain why he’s become a cyborg of sorts, replacing the broken body parts those monsters broke with robotic enhancements.

If that’s all true, then Evil Morty’s origin story has been playing out in front of our very eyes over and over again this whole time.

But what evidence is there to support this?

Well, for one thing, we know that it’s possible to leave your dimension behind and insert yourself in a new one, just like Rick and Morty did in the episode ‘Rick Potion No. 9’. Therefore, it’s entirely possible that Rick might have left his own Morty-less dimension to join the one this show is set in.

This would also explain that strange moment in the season one episode ‘Close Rick-counters of the Rick Kind’ when we see Rick’s memories of Morty as a child.

The whole premise of the show is that Rick’s been absent for 20 years, so how could he have these memories of our Morty? The answer is he doesn’t. His memories are of the original Morty he abandoned who grew up to become evil.

Given how often this theory has popped up online, it’s hard to credit who came up with it first, but an early visual example can be seen here at Imgur and a more detailed explanation can be found in this Reddit thread.

As user Jack-the-Knife points out, most of the opening clips have since appeared in actual episodes, but the one where Morty nearly dies hasn’t turned up still, and that might be because this particular moment took place before the pilot itself.

Rick and Morty co-creator Dan Harmon was once asked about earlier versions of the theory — sans this info about the opening credits — and he didn’t rule it out either.

It seems then that with Evil Morty soon returning to our screens, Rick and Morty may finally confirm this popular fan theory in season four or at least address it in some way.

In the meantime, keep flicking through all the channels on Interdimensional Cable instead until Rick and Morty head back to our dimension with five new episodes on November 10.