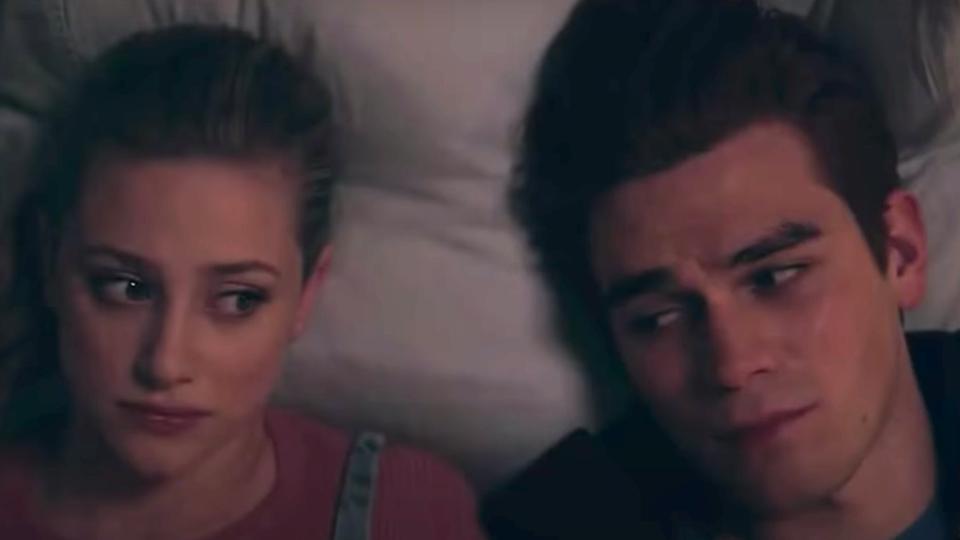 Riverdale is back with its forbidden romances, murderous villains, and of course, its tickling ring. Let’s break down this week’s episode by story, shall we?

When Hiram announces his latest distribution plan — putting his rum in Elio’s casinos — Veronica fires back by targeting a younger crowd: She and Cheryl have made a more affordable version of their product for college kids. Of course, Veronica hasn’t been to college, so how could she know that it’s all cheap vodka and even cheaper beer?

It doesn’t take long for Maple Claw to step on some toes. Apparently, the Malloy family and their Mallow Maple Moonshine run the college market, and they’re not too happy about having new competition. Naturally, Veronica assumes Hiram is behind this, so she tells them to go away. (Can you imagine if this really happened among alcohol distributors? Picture this: Malibu Rum and Natty Light go head to head for state schools!)

The Malloy boys return and vandalize the Maple Club, at which point Hiram informs his daughter that he has nothing to do with the Malloys. But, feeling particularly protective, Hiram takes it upon himself to track down one of the Malloys and beat him up. However, he doesn’t finish the job, and in the end, the Malloy ends up beating the crap out of Daddy Lodge. As Hiram later tells Veronica, he showed mercy, which is a “weakness of will that I quickly came to regret.” Okay, no one talks like that and definitely not when they’re probably bleeding internally.

In the end, Veronica tells her father she’s proud of him. She sees him showing mercy as a sign that her father is changing … little does she know he went back and shot the Malloy patriarch. After all, Hiram’s gonna Hiram.

When Reggie notices that Fangs and Kevin are making money, he asks to get in on their business. In an attempt to explain the tickling world, they tell him that it’s not at all sexual and is instead more like an endurance sport. Everything about that sentence is incorrect, by the way.

After one video featuring Reggie’s “nice and deep” laugh — have I mentioned I hate this? — Reggie decides they no longer need Terry as their distributor. If they cut Terry out, they can make even more money! And for some reason, Kevin and Fangs decide to go with Reggie on this one? No one has ever complimented Reggie for his smarts, people!!

While Kevin lies to Terry about leaving the tickling business — still hate this — Reggie decides to get his friends in on the action. His plan? To pair up Bulldogs and Vixens and have the Vixen do the tickling. Really, that was Toni’s plan, but it doesn’t matter because it backfires when Terry finds out and demands 40 percent lest his boys break Kevin’s fingers, leaving him to “never tickle anyone ever again.” UGH IF ONLY.

But Reggie still doesn’t back down. Instead, he calls a meeting with Terry and tells him that the Bulldogs will come after him if he touches Kevin again. Terry tells him he’s made a big mistake, and I’m still so mad that this is all about tickling.

In the end, someone — probably Terry — calls Mr. Honey and informs him about the tickling ring, and seeing as how the athletes are wearing school uniforms in the videos, he’s allowed to shut them down. Because apparently Mr. Honey thinks the videos tarnish the reputation of the school. You know, the school where someone was MURDERED during a school play. Wouldn’t want to tarnish that rep!!

The only good thing to come out of this is it sounds like Fangs is going to follow Kevin after high school so they can be together outside Riverdale.

Jughead’s got a new mystery to solve, so he’s working with Charles to figure out where the mysterious videotapes are coming from. And all signs are pointing to Ethel.

It seems Ethel is the one who dropped the videotape containing the masked Jug and Betty at the police station, but she plays dumb. At this point, she says all she wants to do is keep her head down and make it out of Riverdale in one piece, and you know what? It’s the sanest thing anyone’s said on this show in a long time.

But when Jug’s investigation leads him to the local video store and he and Charles discover that Ethel has a serious thing for filmmaking — and specifically Friday the 13th — Charles decides to have a chat with her. And at her house, he finds Bughead’s sex tape! Even worse? It’s called PONYTAIL PLAYMATE!!! I just threw up in my mouth a little bit.

Jug once again confronts Ethel, and again, she has an answer: She didn’t realize what it was when she saw the name, and once she realized it was them, she kept it so no one else could see it. As for where she got it, there’s a section of the video store called the Scarlet Suite, and I’m trusting no one needs me to explain that one.

In the Scarlet Suite, Jughead and Charles find a video of Clifford Blossom shooting his son, quite literally a snuff film. So, of course, that gets them shut down, a fact that bums out … Mr. Honey! It seems he’s a big fan of the Scarlet Suite and now a prime suspect for our town voyeur.

And that brings us to the next tape: Two more creepy masks appear as someone reenacts Clifford shooting Jason. (Why they’re not trying to find the person making the masks is beyond me.)

After their kiss, Betty and Archie are both all in their feels. Archie spends his time thinking about Betty and writing her a song, and Betty spends her time thinking about Archie and reading her old diaries. In flashbacks, we get to see the day she “fell in love with the boy next door,” the day he proposed to her, and even the day Betty decided she hated Cheryl. (Cheryl made Archie kiss her because they’re both redheads.)

Meeting in the bunker, the two of them discuss how completely confused they are. She loves Jughead. He loves Veronica. But isn’t this nice, too? They don’t come to any decision, but they do hold hands for a bit.

Eventually, they agree that they can’t stop thinking about each other so they need to meet again. They’ll reconvene tomorrow night at the bunker, but before that, Cheryl realizes that she was right about Betty’s feelings for Archie and actually offers some advice. She thinks Betty is only in love with the idea of Archie, the idea of the perfect romance. And now, she thinks they should stop before they even start. (Cheryl then tells Veronica she wants out of their business, and V obliges.)

At the bunker, Archie starts to play the song he wrote for Betty, but she stops him. Neither one of them knows what this has all been about, but she thinks maybe it’s because the future is so uncertain and they’re each other’s safe place. But they agree that because neither of them wants to hurt Jughead or Veronica, this has to be over.

Furthermore, Archie tells his mom he’s ready to get serious about the Naval Academy and Betty burns her diaries … well, all but one. And something tells me that despite “deciding” to stop this and burning some old diaries — which really upset me because, as Stefan Salvatore once said, “Memories are too important” — we’re not done with this story. (Because if we are, what was the point?)