KJ Apa was on a self-discovery road trip in the middle of the country — and a global pandemic— when filmmaker Adam Mason called him to discuss starring in the first movie about coronavirus, Songbird. “It was just me and my truck with a tent rigged on the back when I got the call,” says Apa on the phone from the set of Riverdale. From the desert, Apa, bearded, with a full head of grown-out hair and a self-confessed generally “disheveled” look, agreed with the director that his current vibe made him a perfect fit to play Nico, a frontline courier who, due to his COVID immunity, spends his days biking around the city making deliveries.

Songbird is set in 2024, where COVID-23 has mutated (the mortality rate is over 50 percent and the virus kills at an accelerated rate) to the point that the world is in its fourth year (!!) of lockdown, and infected Americans are forced from their homes and into quarantine camps. It was phone call that planted the seeds of that story in Mason’s mind too — and it spread virus-fast from there. The day after parts of the country went into official lockdown on March 13, the filmmaker received a call from his writing partner Simon Boyes. “It was surprisingly early, and he was surprisingly excited,” says Mason. “I was like, ‘Why are you excited? It’s the end of the world.’ He said, ‘We should just go and make a movie. We should just get together with our friends and do something on our phones.’” Mason and Boyes spent the rest of that first Saturday in lockdown frantically typing up a 12-page “call to arms” that outlined the plot for Songbird and also included details on what they were going to do and how they were going to pull it off during a pandemic. Mason then sent an email to producer Adam Goodman with the pages attached and the subject line: “Crazy Idea!” Another day and another phone call later, Goodman was on board and so was, little-known producer, Michael Bay (Armageddon, Pearl Harbor, Transformers). 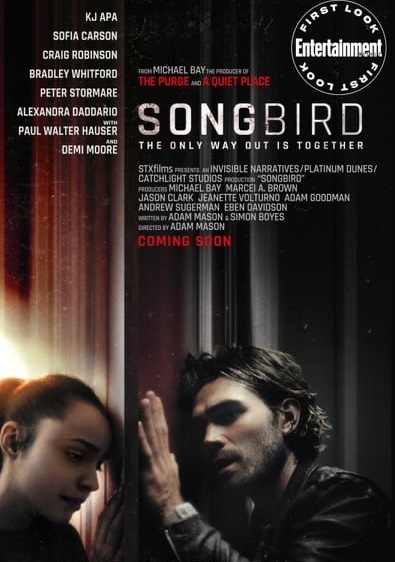 With such a team in place, suddenly shooting it on an iPhone wasn’t going to cut it. Mason and Boyes started working on the script in earnest, but as Mason wrote more elaborate plot points into this story set four years in the future (sorry, no insight on who wins the election), he found some of the things he thought he was inventing were actually coming true right outside his window. “Adam [Goodman] would say to me, ‘You can’t have a curfew, that’s too dystopian — no one will believe it,’” he says,. “Literally the next day there were helicopters flying over my house with loudspeakers saying, ‘Everyone in their homes. Curfew’s starting.’”

Amid this exaggerated version of the current hellscape, where there’s curfews and martial law, Apa’s character Nico, finds hope and love with Sara (played by Sofia Carson) — even though they’ve never actually met due to the strict lockdown protocols. “It’s a dystopian, scary world, but it’s a romantic movie about two people who want to be together, but they can’t,” says Mason. “It’s Romeo and Juliet, but they’re separated by her front door and by the virus.” With the script done, one of his leads in place and production about to start, Mason Zoomed with a young actress whose Netflix show he’d just watched on a whim over the weekend. Carson got the call on a Wednesday and was on set by the Friday of the same week. For the actress, the immediate appeal lay in her character’s strength. Despite being trapped inside her apartment and in danger of being seized by the city’s sanitation department, there “isn’t a second Sara feels like the damsel in distress,” says Carson. “Even though she’s lost everything, she is a warrior of hope. She represents this young generation of fearless men and women who are holding onto hope and who are the real true leaders, who will lead us into the future.”

With the roles cast (the impressive lineup also includes Demi Moore, Bradley Whitford, Paul Walter Hauser, Craig Robinson, Peter Stormare and Alexandra Daddario), production began on Songbird on July 8, making the thriller the first feature film to be made during COVID in Los Angeles since March. Strict safety measures —including the crew being separated into three zones— frequent testing, and a small crew of less than 40 people daily, allowed the movie to be made in just 17 days. “We were kind of trepidatious, but still very much amped and excited to get to work,” says Apa, who —thanks to stay-at-home orders— found himself shooting hoops on a deserted road bridge in the middle of L.A. for one scene. “It was really eerie, but the way we shot was every actor’s dream.” Coming from a guerrilla-style filmmaking background, Mason was relatively unfazed by the small crew and break-neck pace. “I normally do the lighting and the camera work myself,” he says. “So, I’m used to being very close to the actors and filming in this very intimate way that was perfectly suited to filming during the rules and regulations of the lockdown. I found it incredibly liberating because everyone was just so happy to be involved. All the normal egos that go into making a movie, that kind of bullsh— didn’t exist with this project.” Egos might have been set aside, but there was still the need to impress whenever Bay was on set. “He’s a living legend,” says Apa. “While I was very much excited by his presence, I was also like, ‘f—, yeah, I want to give it everything.”

For those who imagine watching a movie that explores the grim reality of the past 8 months intensified tenfold would be about as anxiety-inducing as, say, the last 8 months, Carson believes it’s the movie’s overarching message that’ll make it more than worth the watch. “Even though this is the pandemic thriller and it’s suspenseful and terrifying, the heart of a story is hope,” she says. “It’s the hope that is represented in Sara’s character and the love between Sara and Nico. In our never-ending dark night, the songbird sings a song of hope.” We could certainly all use more of that.

A release date for Songbird has not yet been set.