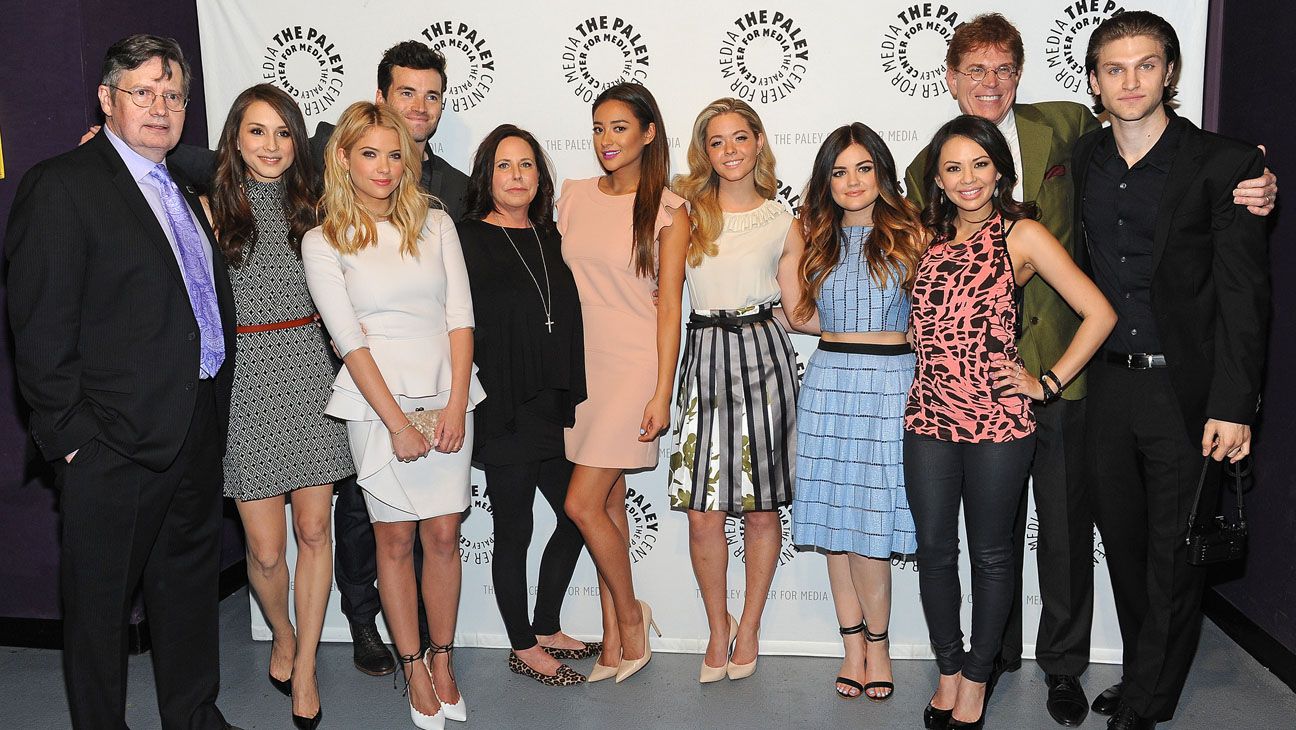 It’s been three years since Pretty Little Liars ended, but the bond between the cast remains as strong as ever — as proven when the stars reunited virtually for a truly epic reunion.

On May 15, several of our PLL faves teamed up with Cast4Good, an organization that aims to unite fans with their favorite celebrities and entertainment stars in order to support charitable organizations amid the coronavirus pandemic. (Proceeds from the PLL reunion, for example, benefited Feeding America, which is Cast4Good’s inaugural charity partner and the largest domestic-hunger relief group in the country.)

Friday’s livestream was moderated by Damian Holbrook, and included I. Marlene King, Ashley Benson, Lucy Hale, Shay Mitchell, Troian Bellisario, Sasha Pieterse, Janel Parrish, Tyler Blackburn, and Ian Harding. (Keegan Allen, in true Toby Cavanaugh fashion, was sadly unavailable because he was “in the middle of the mountains” with no cell or wifi service.)

After getting off to a little bit of a rough start because the PLL Army basically broke the internet (we have done it before, after all), the livestream kicked off with a ton of reminiscing, hilarious anecdotes, and ~insider~ secrets of Rosewood. Ahead, check out some of the highlights — but we’re warning you, you’re going to want to do a full series re-watch at the end of all of this. Thank goodness PLL is coming to HBO Max later this month; get your black hoodies ready!

The hardest scene to film isn’t what you might think.

When asked about the most difficult scene, the answer didn’t include underground bunkers or twin trickery (but more on that in a minute). Several of the PLL crew agreed that the final scenes of the series were the most emotionally taxing. “It was hard to keep it together,” Marlene admitted, while Troian reflected on the moment she drove home after filming for the final time. “I remember getting in my car…and driving home from Warner Bros, and I was like, that’s the last time I’m going to drive home,” she recalled.

Even the cast has some mixed feelings about #Spaleb.

While Tyler is a #Haleb shipper at heart, he seems to have a soft spot for Caleb and Spencer’s romance. “I thought it was a really great experience,” the actor explained, adding that the fan backlash was surprisingly welcomed. “There’s no such thing as bad press!” he quipped.

“It was awesome to just mix it up,” Tyler continued. “I feel like also the show just took more of an adult turn then.”

Troian agreed, adding that some of the scenes that came out of the Spaleb storyline were incredibly powerful. “Like that scene between [Hanna] and me and [Caleb] was one of my favorite scenes filming, and one of my favorite scenes from the whole storyline,” she said, referring to the emotional moment where Caleb is talking to Spencer through the barn door, while Hanna is quietly listening and everyone is crying. “It was wonderful material and it was so exciting to get to open up those sides of our characters.”

Just how did they create all that twin magic?

Marlene and Troian talked a bit about how they created all of the Spencer and Alex scenes during the show’s highly anticipated finale in 2017. Troian explained that she filmed all of her twin scenes with another actress who played the part of the opposite sister, and then all of the clips were spliced together. But the entire process was undoubtedly emotional — even the table read.

“I was sweating,” she said. “I was so nervous. It was the most emotional thing for me…because it was the first time I was going to show people what I had been working on as far as a dialect and how I was going to bring Alex to life. And then as soon I was getting through all of that and basically sweating through every piece of clothing I had, we got to the scenes where we were saying goodbye, and then I was just a snotty mess of tears.”

Lucy took a piece of Ezra’s apartment home with her after the show wrapped.

When asked if they took a memento from the PLL set, Lucy revealed that she “stole” one of the posters from Ezra’s apartment — and it seems as though Ian had no idea.

“Wait, you took the poster?!” he asked her during the livestream, adding that he always wished he had taken the “old, creaky chair” from the apartment set.

Spencer and Toby are happy together, wherever they are.

When asked where #Spoby is today, Marlene offered some heartwarming news for fans. “They’re totally together, they’re endgame,” the showrunner said, adding that Spencer is practicing law and Toby is building houses. “They’re rocking it. They probably have kids already.”

Let us slide into your DMs. Sign up for the Teen Vogue daily email.

Want more from Teen Vogue? Check this out: