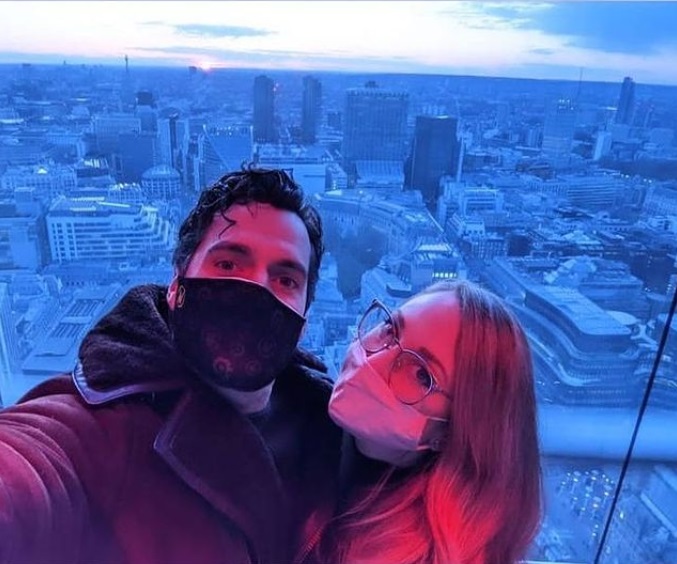 The Justice League actor celebrated his 38th birthday on Wednesday, with his girlfriend marking the occasion via a sweet (and rare!) snapshot on her Instagram Story.

In the selfie, taken by Cavill, he and Viscuso are snuggled close together inside a high-rise building, with a city skyline visible in the background.

“Happiest of birthdays to my birthday boy,” Viscuso, 31, wrote on top of the image, tacking on a celebratory smiley emoji at the end.

Cavill went public with his relationship to Viscuso, a television executive, on April 10, just days after the pair were spotted on a romantic walk together in London.

They both posted a sweet Instagram photo of themselves pensively playing chess together. Cavill smiled at his girlfriend while she astutely focused on the board game in front of them.

“This is me looking quietly confident shortly before my beautiful and brilliant love Natalie, destroys me at chess,” The Witcher actor wrote.

“Just teaching my dear Henry how to play some chess … or … maybe he let me win?” Viscuso captioned her post.

According to her LinkedIn, Viscuso is currently the vice president of television and digital studios at Legendary Entertainment, one of the production companies behind Cavill’s films Man of Steel (2013) and Enola Holmes (2020).

Eagle-eyed pop culture enthusiasts might also recognize Viscuso from a 2005 episode of MTV’s My Super Sweet 16.

Her milestone birthday was featured on season 1 of the hit reality series after she moved to San Diego from Roswell, New Mexico.