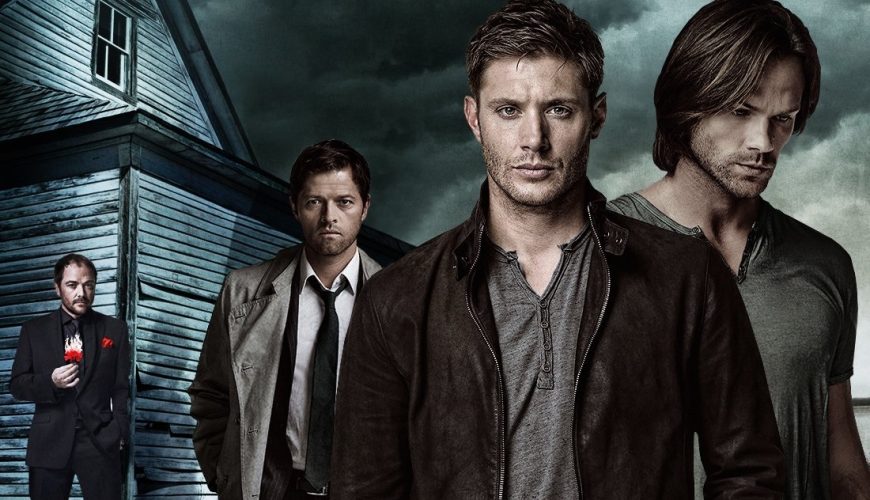 Supernatural is one of a kind! There probably won’t be any other shows like this one. If you are a fan who has just finished watching all the seasons of the show and is wondering what to do with your life next. If you are looking for some other show to fill the hollow vacant void left behind by the conclusion of Supernatural then you have come to the right place.

5. LUCIFER (HEAVEN, HELL, ANGELS, DEMONS, GHOSTS)
Lucifer is closest to Supernatural because both these shows share numerous similarities. The main protagonists in both the shows investigate and solve cases. While Supernatural is concerned with paranormal haunting cases whereas Lucifer follows normal day-to-day life crimes. Both shows features angels and demons, heaven and hell, their lore are pretty similar. Certain characters such as God, Lucifer, Michael, Gabriel exist in both the Universes. However, they have contrasting personalities and are portrayed by different actors. Another reason for you to watch Lucifer is due to its amazing soundtrack. Like Supernatural, this show also features plenty of amazing hits that you’ll fall in love with.

4. TVD/THE ORIGINALS (BROTHERS, SPN BEINGS)
The Vampire Diaries and its spin-off ‘The Originals’ are also quite similar to Supernatural in many respects. Both TVD & Originals feature a pair of brothers in the titular roles, their complicated relationship, and how they always supported each other. Also, the TVD & its spin-off are set in an Universe where vampires, witches, sirens, ghosts, and werewolves exist. If you enjoyed ‘Supernatural’ creatures the most then these shows are perfectly for you. Both these shows feature brothers who in many aspects are similar to Sam and Dean, and they have to deal with different sorts of Supernatural threats. Sounds much like Supernatural, right? But not really, these shows also have plenty of romance and comedy. So if you are into love stories and drama then Vampire Diaries is the best show for you. If you enjoy politics, slow-burn thriller then Originals is the right show for you. Both these shows aired on the CW Network. Once a crossover was planned between Supernatural & TVD, but unfortunately it couldn’t happen.

3. GRIMM (HUNTERS, VARIETY OF SPN BEINGS, INVESTIGATION)
You’ll find this show in every list which reads ‘Shows like Supernatural’. The show revolves around a cop named Nick Burkhardt who discovers that he comes from an elite bloodline of hunters who possess special abilities to defeat the Supernatural threats. Nick is able to experience the paranormal beings who walk among the ordinary humans. Now it’s his job to protect the innocents who are unaware about the existence of the Supernatural from some grave threats. Like Lucifer, Grimm is a police procedural drama. But the culprits here aren’t ordinary humans, but Supernatural beings. The word ‘Grimm’ refers to the bloodline of the hunters or protectors who possess the special ability to fight the paranormal. So if you loved the variety of different creatures and beings who all possessed unique powers and abilities, and Winchesters had to study lore and do research to dispose off them then you’ll surely like Grimm.

2. THE X-FILES (AGENTS, PARANORMAL, INVESTIGATION)
The X-Files revolve around two FBI agents who travel all across the country while investigating the unnatural and paranormal happenings. While one agent named Mulder believes in the existence of the extraterrestrial, but his partner Scully doubts all that. Soon they both learn they are just a small cog in the machine. There’s a bigger conspiracy set in motion. Supernatural is similar to X-Files in numerous ways. First foremost, John Shiban who worked on X-Files was a part of the Supernatural and he is the one who assisted in crafting the mythology of the show. The reason Jared Padelecki was drawn to the Supernatural project was because he loved X-Files and Twilight Zone and found Supernatural to be similar to them. The Original format of Supernatural involved two journalists traveling in a van investigating the paranormal which sounds almost like X-Files.

1. BUFFY THE VAMPIRE SLAYER (Family, Team, SPN Beings, Hunter)
Buffy The Vampire Slayer is one of the most iconic shows of all time. It’s no surprise that Supernatural gets compared to this hit series a lot. Buffy also featured a group of people who learn that they possess special abilities and they have to fight off Supernatural threats. Supernatural has featured numerous actors for Buffy and its spin-off titled Angel. Whether its featuring the big bad monster of the week or the detailed and depth storytelling, hunting and monster lore. Both shows are somewhat familiar. Unlike the other shows, Buffy had the ‘Scooby Gang’ to defy all the odds which is similar to Team Free Will.

My name is Damyan Ivanov and i was born in 1998 in Varna, Bulgaria. Graduated high school in 2016 and since then i'm working on wordpress news websites.
News, Similar shows, Supernatural, TV Series