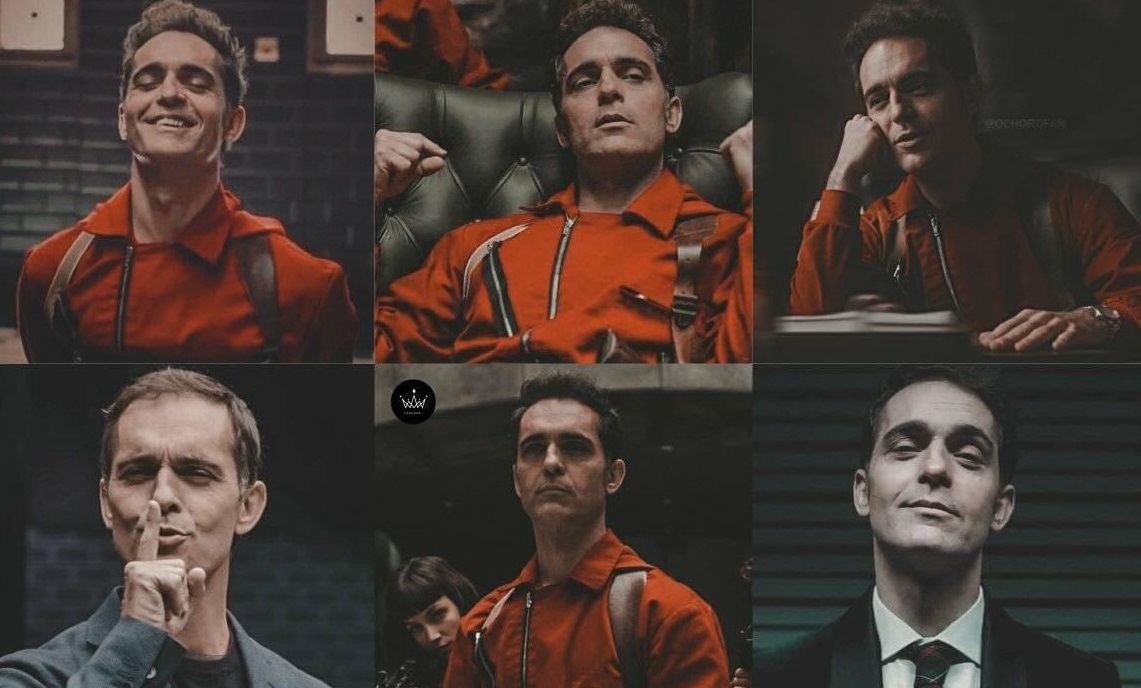 Money Heist’s Pedo Alonso, or Berlin, is a favorite character on the series, not just for fans but for the cast, too. Find out more about him here.

Berlin’s death made Part 2 of Money Heist difficult for most fans because he seemed like the most indispensable character in the show. He, however, came back to the third and fourth seasons of the show through flashbacks and was as amazing as ever, which is why the show can’t be reviewed without mentioning him.

The love for Berlin is all because of Pedro Alonso, the legendary Spanish actor whose portrayal of the character has been praised by many people, including his co-stars. Alonso has been on the screen for over two decades and is acclaimed for many works in Spanish, but La Casa De Papel made him an international star.

Updated on December 12th, 2021 by Kayleigh Banks: When it comes to Money Heist, there are a ton of engaging and dynamic characters. One that particularly stood out was controversial heist leader, Berlin, whose unpredictable and villainous nature made the heist extremely complicated and dangerous for all involved. While he certainly made the series a lot more interesting, the main reason why fans were drawn to his character was because of Pedro Alonso’s great skills and talent. Although many fans were upset that he had been killed off, they might be delighted to know that they have yet to see the last of Berlin just yet.

His Early Acting Career
Pedro Gonzalez Alonso hails from Vigo Pontevedra, a town in Galicia, Spain. His mother tongue is Galician, in which he did most of his early work, but he also speaks Catalan, Spanish, and English. His multilingualism has played a big role in advancing his career. His first appearance on TV was in the 1997 Spanish show All Men Are The Same, in which he played the role of Raul for five episodes.

He graduated from The Royal Theater Academy of Madrid in 1992, got his first role in a short Spanish TV movie named Habits three years later, and hasn’t been off the screen since then. He has since starred in popular Spanish films, including the role of Ramon in the 2011 film, Where Is Felicidade?.

He Had Big Roles Before Money Heist
Before Netflix took over the distribution of La Casa De Papel in 2017, the crime drama aired on Antena 3, whose largely Spanish audience knew Pedro Alonso quite well. Alonso was famous for his role as Diego Murquia or Adrian Vera Celande in the historical drama, Gran Hotel.

He also appeared in the TV Show The Ministry Of Time, as Lieutenant Cherry, for two episodes. Gran Hotel, which also aired on Sky in the UK in 2012, made Alonso a household name in Europe, as well as in South and Central America. His first major role in a crime drama before Money Heist was in the Spanish show Boja Suspicio (Under Suspicion).

He Also A Dancer, Writer, and Painter
Just like Andres De Fonollosa, Pedro Alonso is a versatile man that seems to enjoy many fields of art. One of the biggest attractions to Berlin in Money Heist is his dance moves, and they are not artificial. According to Super Stars Bio, to spice up his acting career, Pedro Alonso took professional dancing classes at the Teatro De La Danza (Theater of Dance).

He is also a prolific writer, with many publications under his belt, although he prefers Pedro Alonso O’Choro as the tag for his written works. His biggest hobby, which has also turned into a professional career for him, is painting. His paintings cover most of his Instagram profile, which suggests that he enjoys it nearly as much as he does acting.

He Doesn’t Like Berlin
When Identity Magazine asked about his opinion of Berlin, Alonso said, “His intentions are bad, his morals questionable, and he is always leaning to the dark side.” He didn’t like the idea of being the psychopathic leader of a gang toppling the global economy, at first. However, he grew to love the role, as he fit into it naturally.

He also confessed that people love Berlin because he is true to his feelings. Pedro didn’t know that Berlin would die after robbing the Royal Mint, but he was happy when he didn’t have to portray the old Berlin anymore.

His Final Scenes In Money Heist
From numerous behind-the-scenes images and videos, fans know that the cast and crew of Money Heist are extremely close so it doesn’t surprise anyone that an actor departing from the show can get emotional.

Although Pedro Alonso filmed his final scenes without any of his co-stars around, he did reveal in an interview with Philstar that he was deeply moved by the final gift he received from show writer and close friend Javier Gomez Santander. “Once I heard that [the letter came from Gomez Santander], I began to cry,” Alonso said, “I read a little note that absolutely broke my heart.” The interview further showed Alonso expressing his gratitude for the show, stating that it did provide him with “many memorable situations that [he] wouldn’t forget.”

His Hardest Money Heist Scene
With the intense action surrounding the first heist, you would expect his hardest scene to be Oslo’s death or Moscow’s, but they weren’t. Pedro Alonso revealed to Express that he found the scene where Inspector Murillo came into the Royal Mint to get proof of life the hardest to shoot.

Berlin was tasked with keeping the humor going, pleasing the inspector, and also keeping everything calm and professional. The demand was so much on him as he confessed he was “walking a fine line,” trying to keep the mood of the scene. He managed to pull through perfectly in the end, if fans consider the positive reviews of the first season.

The Writers Faced Immense Pressure To Cut Berlin From The Show At The Beginning
Although Berlin is considered one of the best characters on Money Heist, some fans may be surprised to learn the writers had faced immense pressure to cut him from the show. In the Netflix documentary, Money Heist: The Phenomenon, showrunner Álex Pina revealed that someone suggested he “take [Berlin] out of the series” since the character’s misogynistic and narcissistic tendencies “didn’t fit with the times.”

Pina ultimately refused to do so because he believed that Berlin would make a complex and interesting villain. Many fans would agree that Berlin’s inclusion did add some surprising and unexpected twists, particularly since he often turned against the crew and deviated from the original plan at times. Not only did his actions have the other heist members on their toes but Berlin also had the viewers on the edge of their seats too.

Berlin Was Only Killed Off Because The Writers Thought The Show Had Been Cancelled
When it comes to the show, the Money Heist writers haven’t been afraid to kill off fan-favorite characters. Moscow died after being shot several times by the police. Nairobi was killed by Gandía due to his own personal agenda and Tokyo ended up sacrificing herself to save her friends. Berlin was also another casualty as he died in a similar manner to Tokyo at the hands of the police.

However, some fans might not have realized that Berlin’s death wouldn’t have happened if the writers knew the show would be picked up by Netflix (according to the sources of Express). Since the show was originally on the verge of cancellation, it is believed that the writers decided to give him an epic send-off since he played such a major role in the series.

Being A Partner And A Father
Pedro Alonso prefers to remain tight-lipped when asked about his personal life, but his love life is not as conflicted as Berlin’s (who had been in love with both Palermo and Tatiana). While it’s not known how long they have been dating, Pedro Alonso has revealed that he is in a relationship with Tatiana Djordjevic, who is a hypnotherapist (according to the Express).

The name is very interesting for Money Heist fans, as it is similar to that of Berlin’s supposed ex-wife. Alonso also has a 23-year-old daughter called Uriel from a previous relationship.

His Favorite Money Heist Co-Star
Alba Flores (Nairobi) and Ursula Corbero (Tokyo) named Pedro Alonso as their favorite co-star. Alonso’s humor seems to have infected the whole cast since his bromance with Alvaro Morte also reshaped the show. He said in an interview with Identity Magazine that he loved everyone, but his top pick was Alba Flores, who plays Nairobi.

Alonso and Morte also had a powerful bond while rehearsing. They requested that The Professor and Berlin be brothers, rather than just another guy that El Professor picked in the streets. To play Berlin in the first and second seasons, Alonso had to stay for a long time with the rest of the stars since the shooting was intense, and they had a short time to do it.

His Love For Shamanism
Shamanism is an ancient and rather controversial religion, where the believers depend on a messenger who is in a trance-like state and travels to the spirit world to communicate with spirits, and Alonso experienced it firsthand (according to cadena 3).

Many shamanic practices are studied and explored worldwide, and Pedro Alonso said in an interview with La Nacion that he visited a shrine while in Mexico and performed a ritual himself. He did it just one night before he received the scripts for Berlin and joined the Money Heist cast. He likes exploring historical religions, and shamanism may just be his top pick.

Pedro Alonso Will Feature In A Money Heist Spinoff
Although the final installment of Money Heist was released back in December 2021, fans will be glad to know that they won’t have to say goodbye to all the heist members. Just days after the final episodes, Netflix announced that there will be a spinoff that would star Pedro Alonso and focus entirely on Berlin.

With the series set to come out in 2023, it’s likely that the writers have already got several ideas in the works as to where they would like to take the story (especially since there were still a few questions about the character that needed answering). There’s also a chance that some familiar faces could make an appearance in the future too.