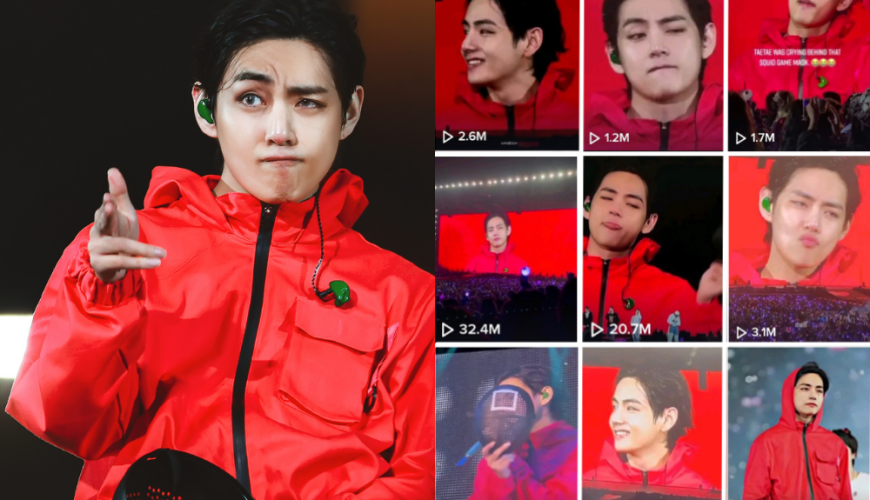 BTS’ V shows off his amazing star power yet again! The ‘Squid Game’ cosplay done by V has proven to be the standout and most memorable moment from BTS’ 2021 ‘PERMISSION TO DANCE: ON STAGE’ concert.

One of his several viral ‘Squid Game’ videos has now surpassed 10.4 million likes and almost 60 million views. It is currently the most-liked K-pop fan video on TikTok.

For those unversed, on the 3rd day of the concert V surprised and delighted the audience by showing up in full-fledged costume as one of the ‘Squid Game’ guards from the super-hit Netflix survival series.

Dressed in a red tracksuit and black mask, V’s stunning visuals and fun performance, attracted both fans and non-fans alike, causing him to go viral on TikTok and Instagram.

Many of his videos amassed millions of views within 24 hours on both platforms, proving his title as the ‘Star Attraction.’ His videos continue to gain interest even long after the concert has ended. BTS members are self-confessed fans of ‘Squid Game’ and V even took a selfie with Lee Jung Jae, a fanboy moment for both of them!

My name is Damyan Ivanov and i was born in 1998 in Varna, Bulgaria. Graduated high school in 2016 and since then i'm working on wordpress news websites.
BTS, BTS Squid Game, BTS V, Cosplay, News, Squid Games, TV Series, V