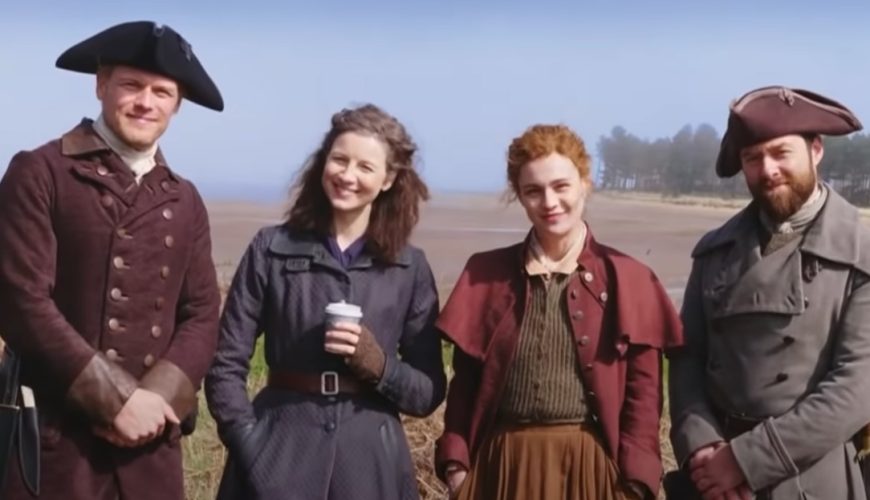 It’s World Outlander Day and Starz is celebrating by unveiling a behind-the-scenes first look at Season 7 which is currently in production in Scotland.

Stars Caitriona Balfe, Sam Heughan, Sophie Skelton, Richard Rankin, and more are offering fans a peek behind the curtain on what’s to come in the super-sized season. “We are here working hard for you, on what is, I think, my favorite season yet,” Skelton teased fans in the video shared by Outlander‘s official social media pages.

“I absolutely agree,” Skelton’s onscreen husband, Rankin concurred. And the excitement doesn’t end there as David Berry, who plays Lord John Grey, acknowledged the fans by promising that there’s “an amazing season in store for us.”

Some of the video segment even teases the show’s newest star Charles Vandervaart and his role as the more grown-up William Ransom, the biological son of Jamie Fraser (Heughan) and Lord John Grey’s adoptive son. And while it might be hard to sit and wait for these exciting new details, Balfe is hopeful that fans can hold out for what’s sure to be an epic next chapter.

“We’re going to have a mega-sized season for you to come back to, so get through this next Droughtlander,” Balfe pleads with fans in the video, below. Clarifying that “mega-sized” comment, Balfe’s costar John Bell, who plays Young Ian, teased that 16 episodes are on the horizon for Season 7.

See the full tease, below, and stay tuned for more details on Outlander‘s upcoming season as production continues.