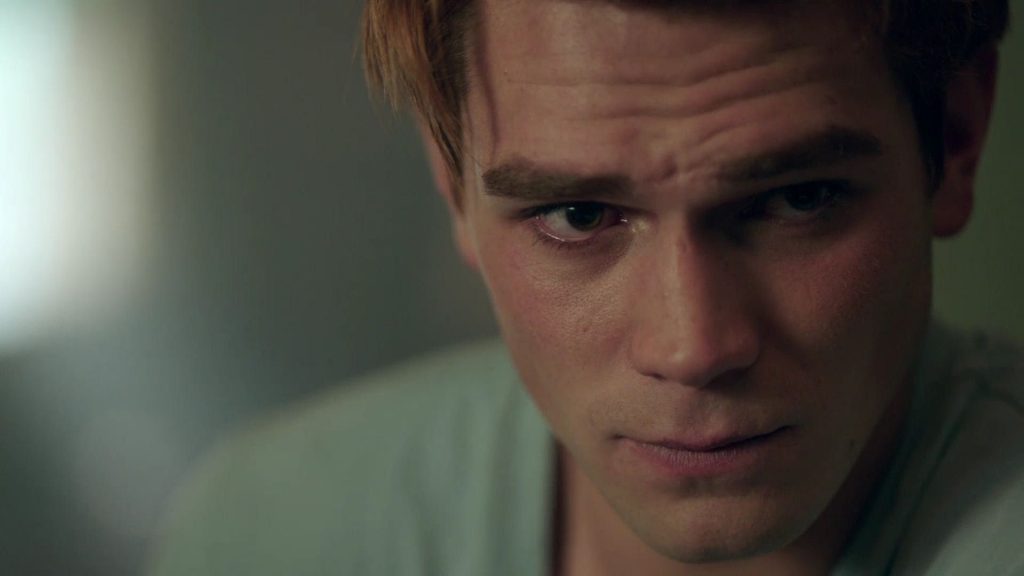 Archie’s ongoing duel with Dodger led him to strike an uneasy alliance this week on Riverdale. (Yeah, he’s probably going to regret this one.)

Archie has been taking Dodger’s kids and rehabilitating them — and Dodger doesn’t like that very much. Archie arrives at his community center to find it trashed, and is more determined than ever to break Dodger’s spell on these kids. He finds out they get free pizza and arcade games for the dirty work they do for Dodger, so Veronica helps him throw a party at the gym with free arcade games and burgers and shakes from Pop’s. Dodger shows up, of course, and hints that he knows Archie is the masked vigilante who’s been giving him so much trouble.

A newly freed Hiram shows up at Archie’s gym and offers his condolences on Fred’s passing — along with a blank check he considers a “charitable donation.” Archie declines, adding that he knows “nothing’s that simple with you.” But then he comes home to find a black hood pinned to his front door with a knife… and he and Mary are forced to duck when a hail of gunfire rips through their living room. Archie turns to Hiram for help, and while Hiram initially says he can’t do anything violent, Archie later finds a badly beaten Dodger barely clinging to life rolled up inside a carpet outside the gym. Be careful what you wish for, Arch.

DOLL PARTS | Cheryl has her own ongoing struggle… except hers is with a freaking doll. She’s afraid to go to school and leave Nana Rose and the twins alone in Thistle House with “Julian” — and her fears are confirmed when Dagwood swallows a ping-pong ball and ends up in the hospital for an emergency tracheotomy. (The kid’s fine, though.) She soon gets a visit from her Aunt Cricket and Uncle Bedford, who want her to sign off on selling the family maple syrup business. But Cheryl says no… and forbids them from setting foot in the chapel, where she still has Jason’s corpse propped up.

Cheryl thinks she’s getting rid of Julian by submerging the doll in a bathtub with a brick — really, Toni, you can leave anytime, we wouldn’t judge — but his curse still lingers. Cheryl’s relatives vow to have her declared incompetent so they can complete the sale, and Uncle Bedford finds his way into the chapel and discovers Jason. He threatens to have Cheryl locked up… when Toni smashes him over the head. They turn Aunt Cricket away when she comes looking for him, but they can’t keep her away for long. Damn you, Julian!

CHIC CHECK | Betty’s quest to figure out what Charles is really up to reunites her with an old pal: her murderous “brother” Chic! She visits Chic in prison to get the real story on his time with Charles, and Chic tells her they used to do a lot of Jingle Jangle together… and one time, a drugged-up Charles stabbed a guy to death! Betty confronts Charles and has him take a polygraph, where he says Chic was actually the one who killed that guy, and Charles cleaned up the evidence before saying goodbye to him forever. Case closed, right?

Chic’s not through messing with the Coopers, though: He lets it slip about the dead body that Alice and Betty helped him hide a couple seasons ago, so Charles and F.P. are forced to dig up the body and move it so the authorities won’t find it. This selfless act convinces Betty that Charles is actually a good guy and not a secret killer — but not so fast! Later, we see Charles visit Chic in prison and report what’s happening with the Coopers… and the two of them press hands through the glass and exchange “I love you”s! Betty, you in danger, girl.

* Jughead spent the week digging into the Baxter Brothers book series, convinced that his grandfather Forsythe actually wrote the first one, even though Mr. DuPont claims he wrote the first five himself. DuPont was deeply offended by the accusation and threatened to expel Jughead for such slander. So Jughead took his evidence to Mr. Chipping, who agreed to help… but then he meekly apologized and dove head-first through a window! And the study group’s new teacher? Why, it’s Mr. DuPont, of course!

* Hiram also moved back in with Hermione — they had a quick tryst, with Hermione saying “I already regret this” even as it was happening! — and Hermosa continued to infiltrate the Lodge household, much to Veronica’s annoyance. (She’s Veronica’s half-sister, for the record; her mom was a dancer in one of Hiram’s Miami clubs and has since died. Or so Hermosa says. We don’t really trust her at all, do we?)

* But really, it’s way past time for Toni to find a new girlfriend, right? Cheryl has gone way, way off the deep end, on multiple occasions. Is the teen lesbian dating scene in Riverdale that low on options? (Yeah, you’re right, it probably is.)

* At least we got that sweet “Bughead” moment when Betty reminded a frantic Jughead to take time out to “kiss your girlfriend.” We need more scenes with these two together, don’t we?