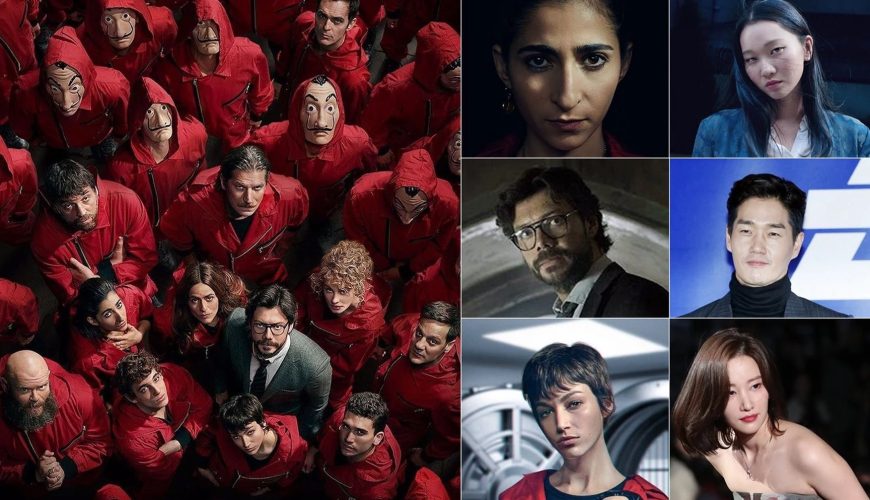 The breakout success of Money Heist took the world by storm. The original series, known as La Casa de Papel (Money Heist) had been cancelled after it was first televised in Spain. But when Netflix picked the show up, it became a surprise hit, and blossomed into a global phenomenon that earned numerous prestigious awards and captured the title of Netflix’s second most watched series behind only Squid Game.

Southern Capitalists vs. Northern Communists
The original Money Heist became an international symbol of discontent and resistance. The show has a thematic undercurrent that calls out the pitfalls of capitalism with the motto ‘Viva la resistencia!’ Robin Hood-like elements of the heist, along with the antifascist protest song ‘Bella Ciao,’ inspired real world protesters to adopt the show’s now iconic Salvador Dali mask as a symbol for uprisings of the oppressed.

Money Heist: Korea showcases this sentiment more overtly. There’s a new dynamic tension between the North Koreans and South Koreans. North Korea is communist while South Korea is capitalist making the imagined creation of the common currency hinge delicately upon economic politics. After the robbers capture the Mint, they divide the hostages into Northern and Southern camps. They threaten to punish the northerners if the southerners try to sabotage the heist and vice versa, forcing the hostages to spy on one another. And within the police responders, there is tension between the South Korean negotiator, Seon Woo-jin (Kim Yun-jin) and the militant North Korean Captain Cha Moo-hyuk (Kim Sung-oh).

Being from the north or the south is a defining aspect of each character. Tokyo (Jeon Jong-seo) is a North Korean immigrant who arrives in South Korea only to find her promised housing and job were a scam (which should sound familiar to Squid Game viewers). After she’s forced into working as club hostess, she murders her boss to thwart him from raping her. After that, Tokyo begins robbing any gangsters who take advantage of North Korean immigrants as an act of revenge. But her partner is killed, and she is identified. She goes on the run, bottoms out and is at the brink of suicide when the Professor (Yoo Ji-Tae) recruits her.

Berlin (Park Hae-soo) is also a northerner. His mother was shot and killed right in front of him when he was a child when they tried to cross the border to the south. As an orphan and a defector, he is raised in a forced labor gulag, which contributes to his psychopathology. Where Money Heist revealed character backstories with efficient flashbacks, Money Heist: Korea dwells excessively on those backstories to fill out their characters.

After the original series became a banner for the resistance, Money Heist: Korea is more self-aware of its potential as a protest parable, but that nearly undoes its effectiveness here. Despite the undisguised communism versus capitalism themes (and it’s important here to remember that Money Heist: Korea is produced in South Korea) the show lacks the subversiveness of original had with its political commentary. While Money Heist didn’t overtly preach about the perils of the growing global economic divide, its rebel spirit was clear on an emotional level. It didn’t seek to change minds but instead, to touch hearts. This makes the signature Dali mask an ironic yet powerful symbol of the resistance.

Dali vs. Hahoetal
The Dali mask captures the surrealistic aspect of Money Heist. The storyline is completely absurd on so many levels, yet despite its ridiculous twists, it still works. Perhaps it works because of those twists. There’s a sense of humor to Money Heist that emerges in the first episode when Rio (Miguel Herrán), Denver (Jaime Lorente), Moscow (Paco Tous), and Berlin (Pedro Alonso) discuss if the Dali mask is scary enough. That dry wit sets up a tone of comic relief throughout the show. The Dali masks keep it tongue in cheek, giving the audience more latitude to accept the surreal. What’s more, Dali is also a world-famous Spaniard, the source of great national pride, and Money Heist is a very Spanish show.

Money Heist: Korea swaps Dali for their own national pride symbol – a traditional Korean folk mask known as Hahoetal. Hahoetal masks are used in rituals dating back to the twelfth century and are treasured by South Koreans as representative of Korean culture. There are twelve traditional Hahoetal masks, each representing a specific theatrical role. The one used by the robbers is called Yangban or ‘the aristocrat.’ Like the Howells in Gilligan’s Island, the Yangban is painfully entitled and consequently the brunt of mockery. It’s a time-honored skewering of the economic divide from an ancient ritual, updated as sly criticism of capitalism by Money Heist: Korea. However, like the north versus south politics of Korea, these cultural aspects will be lost in translation outside of Asia.

For example, after Moscow (Lee Won-jong) gets out of jail, he is reunited with his son Denver (Kim Ji-hoon). Denver is on the run, being chased by money-collecting gangsters. Denver tells his father that he should have brought tofu. What seems like a random passing comment is a nod to a specific ritual within Korean culture. The whiteness of tofu symbolizes purity, newness, and innocence. It’s a promise to reform after paying a debt to society. Within Korean gangster films, or even some K-dramas, this ritual is commonly depicted. This is also why it is a cultural faux pas to give a Korean tofu unless they just got out of the joint. Denver’s oversight by not bringing tofu is a quick passing comment that most Western viewers will miss. However, for anyone familiar with Korean culture, it symbolizes that Denver doesn’t seek to help his father seek redemption – quite the opposite, especially given what happens to Moscow in the original.

What Money Heist: Korea Fails to Steal
In Money Heist, the first heist was told across two seasons in 22 episodes. Money Heist: Korea moves more quickly with only 12 episodes total in this first season, forcing the redux to move at double time and omit many details. Fans of the original series will find many of the omissions glaring.

While the redux reframes everything in Korean, the majority of the MacGuffins and reveals are the same as the original, making it a predictable watch for longtime fans. Even the Easter egg nods serve only to remind those fans that the original was superb and the redux falls short. In Money Heist: Korea, the Professor hides out in a café he launched as part of the plot. It’s Café Bella Ciao. But where is an anthemic protest song like Bella Ciao? That song swept across Europe in the wake of Money Heist with several new versions making the Euro charts including the version from the film. Instead, Money Heist: Korea opens with Tokyo dancing to K-pop. Other small nods, like Seon Woo-jin tying her hair in a bun like Inspector Murillo (Itziar Ituño) or the Korean Denver attempting to replicate the signature tommy-gun laugh of the original Denver, just fall flat.

It’s not until episode 4 of Money Heist: Korea when the romances emerge, but by then, it feels too late. Tokyo and Rio (Lee Hyun-woo), Denver and Yoon Mi-seon (Lee Joo-bin), and the Professor and Seon can’t begin to replicate the hot passionate couplings of the original. What’s more, the LGBTQ orientation of Helsinki (Kim Ji-hun) and Oslo (Lee Kyu-ho) has changed. These marvelously complex characters from the original are reduced to thugs with almost no lines whatsoever.

The biggest failing of Money Heist: Korea is that it doesn’t deliver cliffhangers like the original. This too is a pitfall of mimicking the original too closely. Fans know where it’s going to go so there’s no suspense. But disregarding having seen it before, Money Heist: Korea lacks the cinematic pacing of the original. Money Heist was incredibly well crafted. It interwove conflicts to play out simultaneously, doubling the tension, and intensified it with sharp editing, dazzling cinematography, and most importantly, well fleshed out characters that stole our hearts.

Úrsula Corberó’s Tokyo is a short-fused firecracker that gobbles up every scene she’s, in while Jeon’s Tokyo is a stoic observer who dances awkwardly to K-pop. Álvaro Morte’s Professor is nerdy and compassionate, an adorable genius who realizes too late that he’s in over his head. Yoo’s Professor maintains a poker face and is in bed with the government. For a character-driven show like Money Heist, the dilution of these colorful antiheroes will only disappoint fans of the original.

Perhaps Money Heist: Korea will attract new fans in Asia. But if they get hooked, just wait until they see the original. The tried-and-true Money Heist fans won’t get their fix of the groundbreaking franchise, just a reminder of how great it was and how Money Heist: Korea pales in comparison. We will just have to wait until 2023, when Alonso reprises his titular role in the prequel spin-off Berlin.