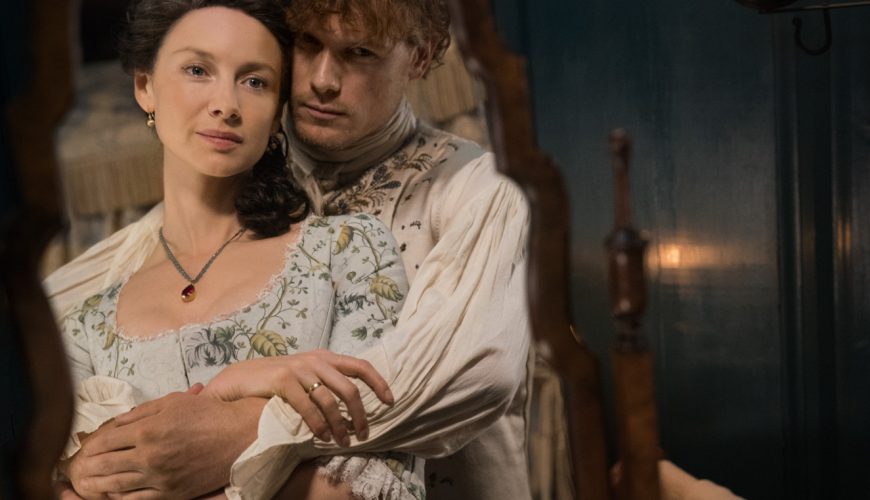 Season 5 of Outlander had the series officially transitioning into a family drama. Sure, the romance between Claire (Caitriona Balfe) and Jamie (Sam Heughan) that started it all is still very much the heart of the series, but the scope has expanded to cover their family members as well.

Based on The Fiery Cross, the fifth book in Diana Gabaldon’s Outlander series, Season 5 follows the Frasers as they continue to create a home for themselves in America, just before the start of the Revolutionary War. Though Jamie bore the majority of the narrative last season, Balfe was still able to shine as Claire, giving a grounding and powerful performance as the matriarch of the Fraser family.

Season 5 kicks off with a wedding, as Brianna (Sophie Skelton) and Roger (Richard Rankin) tie the knot after Roger’s decision to stay in the past with Brianna and Jemmy (Andrew and Matthew Adair), the son who may or may not be biologically his. The question of Jemmy’s paternity comes after Brianna is assaulted by Stephen Bonnet (Ed Speelers) in Season 4, and it’s during her wedding reception poor Brianna is made aware that her attacker, thought dead, is in fact still alive.

In attendance at Roger and Brianna’s wedding is Governor Tryon (Tim Downie), who reminds Jamie of his duty to the Crown in exchange for the land he and his family have settled on. That obligation is now to kill Murtagh Fitzgibbons (Duncan Lacroix), Jamie’s godfather and the leader of the Regulators who oppose English rule in the colonies. The difficult position this puts Jamie in makes for the most compelling storyline the character has had yet.

Meanwhile, Claire is running a clinic from a room in the back of her and Jamie’s home, treating residents of the Ridge. A doctor in her own time, Claire is frustrated by the surrounding deaths caused by ignorance of the time and lack of proper medicine. She decides to make her own penicillin, years before it’s officially invented. She enlists Marsali (Lauren Lyle) as her medical assistant.

Part of Jamie’s duties include him needing to raise a militia in the name of the Crown. Along the way, Jamie and Claire find themselves in a strange side-quest that has the show dabbling for the first time in the horror genre. When trying to secure the freedom of a bondservant residing on the Ridge, they wind up discovering a very sick man being kept alive and tortured by his abused young wife. The woman gives birth to an illegitimate child and leaves it in the care of Jamie and Claire before running away.

They manage to secure a home for the child in Brownsville, a trading post run by the Brown family. The Browns take issue with a member of Jamie’s militia, Isaiah (Jon Tarcy), who impregnated their daughter out of wedlock. The friction between Jamie and Roger is intensified when their methods for dealing with this issue differ greatly, and Claire discovers that medical advice she’d written down at home was accidentally sent out to the broadsheets, the contents of which are upsetting to the more conservative readers.

Now, you may remember the unexpected romance that developed between Murtagh and Jocasta (Maria Doyle Kennedy) in Season 4. This love affair continues in secret until Jocasta receives a proposal of marriage and Murtagh encourages her to accept, as his time will be occupied with the Regulators. He has a change of heart and tries to stop the marriage before it’s too late, but Jocasta decides she will never marry another man involved in war.

At Jocasta’s wedding, the flirtatious Philip Wylie (Chris Donald) lets slip to Claire that he’s in touch with a smuggler, who she quickly pieces together as the elusive Bonnet. Bonnet learns of Jocasta’s intent to leave River Run to Jemmy, making him more determined than ever to claim Brianna’s son as his own.

The simmering tensions between the Regulators and the Crown come to a head at the Battle of Alamance, putting Jamie and Murtagh on opposite sides of a battlefield. Brianna remembers that the English won the battle, and tells Jamie, so he can warn Murtagh. Jamie sends Roger to speak to Murtagh, but Murtagh has no intention of abandoning his cause. While returning to his side of camp, Roger spots a relative of his he met in Season 4. Her husband sees the two talking and makes assumptions that lead to Roger being beaten and hanged by the English.

The Battle of Alamance goes on without Roger, and Murtagh saves Jamie from being shot by one of the Regulators. However, one of Jamie’s men shoots Murtagh, severing Jamie’s oldest living bond and driving Jamie to renounce his duty to the crown as a result.

Roger survives his hanging after Jamie, Claire, and Brianna get to him just in time. However, his voice, which Season 5 went well out of its way to establish as something Roger is particularly reliant on as a singer and an orator, is horribly damaged due to the trauma to his vocal cords. Though he physically heals, he’s psychologically unable to recover for quite some time.

It’s during this dark period that Young Ian (John Bell) makes his return after his time living with the Mohawk tribe as part of an exchange for Roger’s freedom in the Season 4 finale. He’s dealing with traumatic memories of his own, and he and Roger take a little trip together that results in each of them taking big steps towards mentally and emotionally returning to their families.

Season 5 didn’t forget about the love between Jamie and Claire, despite all the other drama going on around them. When Jamie is bitten by a venomous snake, Outlander returns to what it does best, dedicating an entire episode basically to showing how much everyone, but especially Claire, loves Jamie. And really, there’s no other way to say this, but Claire literally brings Jamie back to live with her naked body. It just doesn’t get more Outlander than that.

For two seasons, Bonnet has been the threat looming mostly in the background, only rearing his ugly head now and again to inflict his frankly cartoonish villainy on Brianna and her family. However, Season 5 lets Brianna and her family finally deal with her attacker when he kidnaps her as part of his plan to take Jemmy as his own. Brianna kills Bonnet, and we actually see him die, so we know this time it’ll stick.

Throughout Season 5, Roger and Brianna consider whether they will return to their own time, once Jemmy is old enough to determine whether he can travel through the stones. Once it’s apparent that he can, they decide it would be best for all of them if they went back to the future. They say their goodbyes to everyone on the Ridge, and ask the stones to take them home.

However, instead of returning to their own time, the stones drop them right back where they were, making them realize that they were home all along.

Ian comes to Claire to demand answers for all the secrets that surround her, Brianna, and Roger. She and Jamie finally let him in on the secret of time travel, and he takes it surprisingly well. Not taking things well are the Browns, who come to Jamie asking for his help to create some sort of neighborhood watch. Jamie refuses to get any more involved with the Browns than he has to.

Things only get worse between the Frasers and the Browns when Lionel Brown (Ned Dennehy) discovers Claire was the one spreading modern ideas about medicine, including a woman’s right to govern her own body.

All of this comes to a head in a rather nasty way. The Browns break into Claire’s surgery, violently attack a very pregnant Marsali, and kidnap Claire. During the Season 5 finale, Claire is brutally beaten and sexually assaulted by her captors.

It’s a controversial move; for some, it’s a positive thing for Outlander, a book series written by a woman and mostly aimed at a female audience, to deal so frankly with very real issues concerning sexual assault, something men on the show are regularly victims of as well. For others, the show’s frequent use of sexual assault as a plot device (Claire’s attack is the eighth instance of forced or coerced sex in the show’s five seasons, not counting all the attempts) is gratuitous and bordering on irresponsible. Both points of view are valid.

Claire makes it out of the ordeal alive and is rescued by Jamie, Fergus, Ian, Roger, and the men of the Ridge. The aftermath of her assault will likely be given consideration in Season 6, as the show rarely shies away from following a survivor’s recovery. Season 6 will also introduce the Christie family, who readers know will surely stir up trouble at the Ridge.

It looks like Fergus and Marsali will be having some issues this season, with promotional clips showing Fergus struggling with his inability to protect Marsali from the attack last season and taking it out on her. The birth of the child Marsali was pregnant with at the end of Season 5 will also be featured in Season 6.

Meanwhile, it looks as though Roger will be pursuing a vocation as a minister, like his adopted father before him. Promotional clips have teased Brianna following in her mother’s footsteps and attempting to bring about inventions before their time. All of this will occur as the conflict escalating to the eruption of the Revolutionary War builds, and Jamie will have to make choices that affect his whole family.