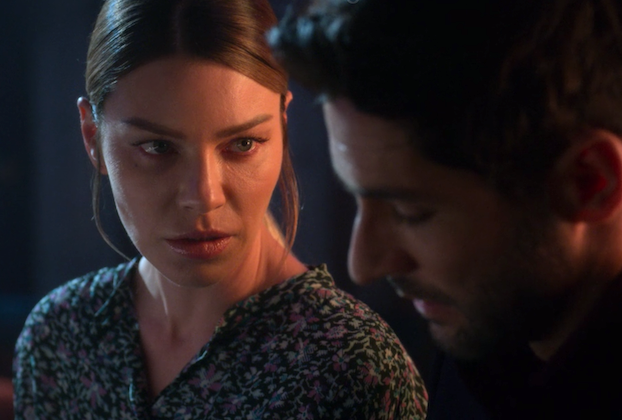 Lucifer’s final season tied up the Devil’s adventures on Earth into a nice little bow and, just like they promised, it was more than a little bittersweet. But the finale also left a lot of unanswered questions. Not just for Lucifer, but for Lucifans as a whole.

As the world jumps forward 20 years in the final moments of the show, there’s major life moments we’ll never fully have answers to. While the cast have somewhat teased they’d be up for a movie, ultimately they’ve also said it was time to let the world of Lucifer go once and for all.

So here’s just a couple of things we’d like to have known before the final credits rolled.

Why wasn’t Trixie at Chloe’s deathbed?
The way Trixie (Scarlett Estevez) was absent in general across the final episodes was a major plot hole in itself, with Chloe’s (Lauren German) human daughter pushed to the sidelines to make way for her celestial mystery half-sister, Rory (Brianna Hildebrand).

While we can rant about that, and why she became the only character not to find out Lucifer’s true identity for a while (and we already have), there is one moment that is simply unforgivable.

Why wasn’t she with Chloe when she died?

Fast-forwarding 20 years into the future, fans find out that Chloe dies of a mysterious illness, and it’s her final moments that triggers Rory to head back in time to get back at her absent father Lucier (Tom Ellis) who, as far as she knows, disappeared without trace shortly after her conception, only to never be seen again.

But after she finds out that he was deliberately away to protect her, Rory returns to her mother and the pair share one last tender moment together before Chloe slips away, rejoining Lucifer in the underworld to finally get her happy ending.

Chloe’s children mean everything to her, and her bond with Trixie was unmatched. There is absolutely no way that she wouldn’t have been there to say a final goodbye to her mother. So where on Earth was she?

Why is Michael in Hell and not on Earth?
Darting back all the way to the end of season 5b, Lucifer’s twin brother Michael (also played by Tom Ellis) was defeated in his mission to become God.

With Lucifer taking up the mantle, Michael kneeled before his brother to accept his fate and be killed — but instead, Lucifer spares him. Deciding to impart a teaching moment, Lucifer doesn’t murder his brother, but instead cuts off his wings, seemingly leaving him earthbound for the foreseeable future.

To drive the point home further, Lucifer declares: “In my time here on Earth I’ve learned everybody deserves a second chance. Even me, even you.” And yet, in the first episode of season 6, we discover that Michael is actually now scrubbing floors in Hell, with only a shot of his scarred back revealing who he is. Why was the decision made to send him down to Hell then? It seems almost a complete flip on what Lucifer was trying to teach him.

It ultimately seems like this was a way for the team to explain away why Michael wasn’t present in the final episodes. That one lingering shot of a man on his knees with a sponge in his hands was the only mention of Michael all season. But it also doesn’t make sense with the over-arching theme of the show which is ‘everyone deserves a second chance’.

Why can’t Lucifer return to Earth?
Lucifer ended with the Devil finding his calling, reforming Hell so he could help the souls down there free themselves from their guilt and ascend to Heaven.

It’s a worthwhile cause, but one that comes with the steep price of him not returning to Earth. Which means he can’t see his daughter, Rory, grow up while also missing out on the final years of Chloe’s life.

While this was an agreement he made with Rory to ensure that her timeline remains in place, his word only extends so far as to make Rory believe that he was never there for her. But he could have been.

In fact, Amenadiel (DB Woodside) becomes actual God, and tweaks the order of Heaven to allow him to return to Earth part-time and raise his son Charlie with Dr Linda. He was also handed the deeds to Lux nightclub, as if he didn’t have enough going on.

Why couldn’t Lucifer pop up every now and again to see Chloe and check in? He may have had to avoid Rory, but he didn’t need to avoid everyone else.

How is Charlie being raised as a half-angel, half-human baby?
Baby Charlie is an anomaly for a lot of different reasons. For starters, he shouldn’t technically exist. But in the final minutes of Lucifer, we see that, after two years of appearing like your average human baby, he has sprouted wings — meaning there is an element of his angel father that will now come into play for him growing up.

Amenadiel is thrilled by the knowledge that his son is a half-angel, but Dr Linda, who is now a single, human mum to a celestial flying baby? Not so much.

And we call them terrible twos for a reason. Charlie is going to be throwing some tantrums pretty quickly, and how is Linda supposed to cope with that? What’s more, how is she meant to explain to potential witnesses that her child who can barely walk is suddenly 30ft up in the air?

There are some logistics they need to work out and fast, or their entire cover will be blown. And we have a feeling Earth is going to have some feelings about the confirmation of angels.

What happened to Adam?
Adam (Scott MacArthur) finally showed his face in season six — and he was a self-entitled, toxic masculine slob who felt that Eve belonged to him. This storyline actually didn’t last very long though, and he was soon offering to walk Eve up the aisle to marry Maze, rather than kidnapping her and claiming her as his own.

We’d call it character growth if it wasn’t so fast.

We never know if Adam ends up back in Heaven, or remains on Earth though. He seemed to be developing a working relationship with Dr Linda in therapy in order to better himself, but then he kind of disappeared.

How can a man who has literally been around for millennia change his spots so quickly? And where exactly is he now? We could see him falling back to his old ways with some mens’ right activist groups, once he figures out how to use a computer. But at the same time, he could become extremely woke, paving the way for the modern man.

Honestly, your guess is as good as ours as he disappeared without explanation just as quickly as he showed up.

What happens to Maze and Eve?
By all accounts, it seems that Mazikeen (Lesley-Ann Brandt) and Eve (Inbar Lavi) fully get their happy ending. In their final moments on screen, they become the ultimate leather-wearing crime fighting duo, looking more in love than ever after finding their soulmates.

They are also immortal though, so while they’re there for the birth of Rory and promise to help raise her, even providing them with her own knives, that happiness couldn’t last forever. The main reason being is that people are going to notice when, 20 years down the line, neither of them have aged a single day.

It likely means they will have to continue their work by travelling around the world to avoid suspicion, but after so many hundreds of years, wouldn’t that get a bit boring? And how are they expected to be there for Rory if they can’t physically be there?