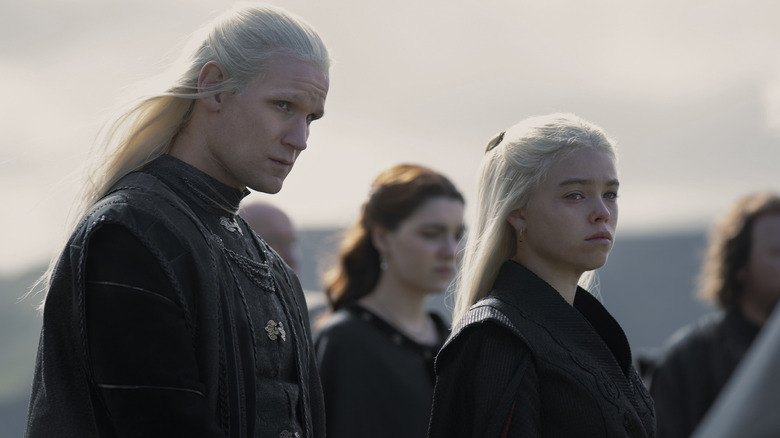 House of the Dragon pulled a fast one on viewers in the thrilling finale of the HBO show’s inaugural season.

The series features twin actors Luke and Elliott Tittensor as twin Kingsguard knights Ser Arryk Cargyll and Ser Erryk Cargyll respectively. But a COVID-19 scare for Elliott led to Luke replacing his brother in one crucial scene in episode 10.

Director Greg Yaitanes, who helmed the season finale, explained the incident to Entertainment Weekly in an interview. Elliott tested positive for COVID-19 during filming, meaning they had to find a replacement for him to fill in. Thankfully, his twin brother Luke was on hand to do just that.

“There’s that scene, that big scene where Corlys comes down and they’re putting the markers on the table and the messenger comes in,” Yaitanes said.

“It was a shot over two days and then one got COVID. [Elliott] got COVID, so we swapped him out with his brother.”

Yaitanes continued: “We were just about to do all Emma’s coverage and he is standing right next to [them].”

The twin brothers emerged as late players in the Game of Thrones spin-off. They were tasked with finding Prince Aegon in episode nine but the twins ended up on opposite sides. Ser Arryk stays with Alicent and the greens, while Ser Erryk defects and joins Rhaenyra and the blacks.

In the finale, Ser Erryk arrives on Dragonstone and presents Rhaenyra with the crown of her father, the recently-deceased King Viserys. Rhaenyra is then declared Queen of the Seven Kingdoms.

The House of the Dragon finale blew audiences away, bringing in 9 million viewers in total. That is the highest number of viewers for HBO since the Game of Thrones season eight finale.

It will be a long wait until season two, however. That won’t be coming until 2024 at the earliest.