You’ve rewatched The Wire, seen every episode of Friends at least twice and are starting to wonder if this is what it feels like to “complete” Netflix. But wait: there’s a world-changing, cultural juggernaut of a TV show that – while hugely popular – you may well have missed.

This week, Money Heist – or, to use its Spanish title, La Casa de Papel – begins another eight-episode run on Netflix, where it is the streaming giant’s most-watched non-English language show worldwide. The first season of the full-throttle thriller saw its gang – all code-named after major cities and memorably clad in revolutionary-red overalls and Salvador Dalí masks – break into the Royal Mint of Spain, taking 67 people hostage and literally printing money: 2.4bn euros, to be exact. It’s fair to say that the plot doesn’t quite go to plan, though it does result in three raunchy romances and an island escape. Season three, an even wilder ride, proved that for this gang loyalty is as much a motivation as loot.

The show’s Madrid-based creator, Álex Pina, believes the latest season has the power to “infuse some oxygen into this disturbing climate … it is a brutal journey to the limit, like a ride on a vertiginous rollercoaster. I can promise the audience will not think of Covid-19 while watching it.” His previous show, the women’s prison drama Locked Up is, along with teen thriller Elite and the 1940s-set mystery High Seas, part of a wave of Spanish dramas that have commanded large international audiences in recent years, all in part because of Netflix. 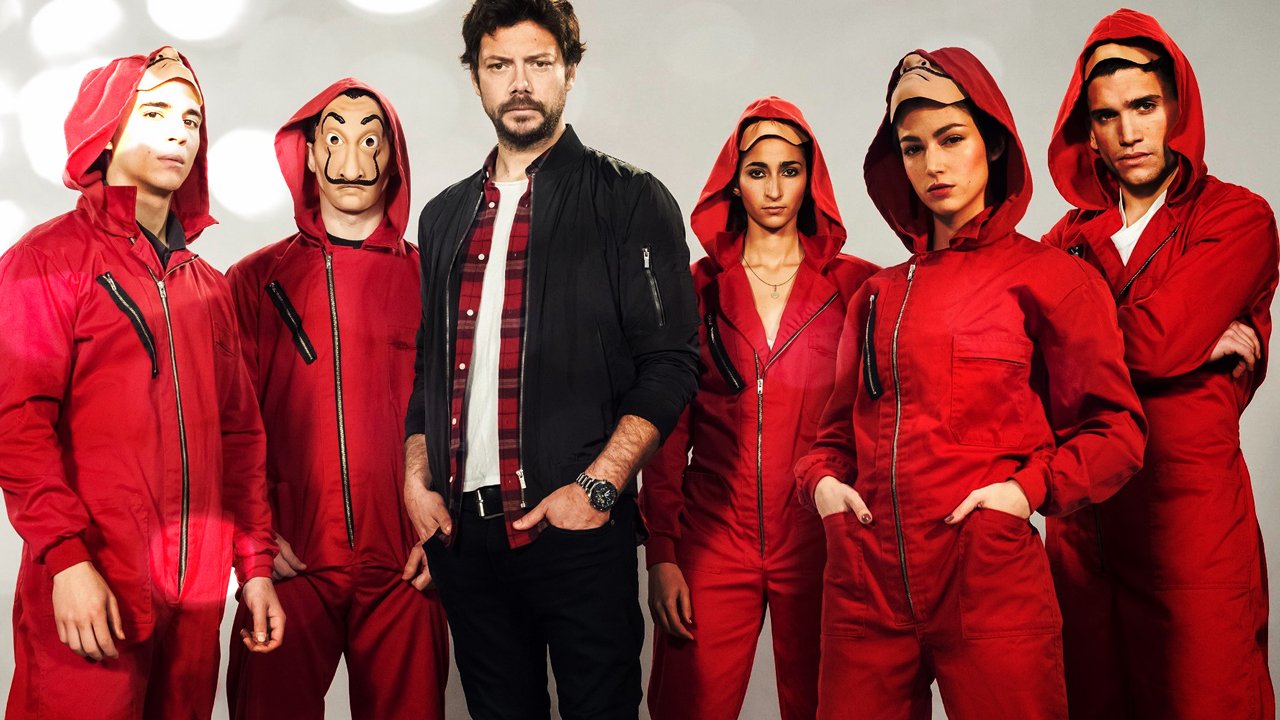 Yet Money Heist is on a different scale. Within months of arriving on the streaming service in 2017, the thriller had become the single most-watched series in countries including France, Italy, Argentina and Brazil, and its third series – released last year – was watched by 34 million households in its first week alone. Its impact has been huge: superfans send Pina photographs of tattoos of Tokyo and the Professor, and the gang’s masks and overalls now rival The Handmaid’s Tale bonnet for the most recognisable TV costume of recent years. They were even worn on political protests in Puerto Rico and during a real-life robbery in the French city of Nantes. In Argentina, where the show is particularly beloved, babies have been named after its protagonists.

The reasons for Money Heist’s appeal are obvious but also strangely ineffable, not least in episodes such as the season three opener, where characters switched between emotional extremes and glamorous locations with equally delirious speed. “It’s pure rock’n’roll,” says Álvaro Morte, who plays the gang’s meticulous mastermind, the Professor. “Once you see the first chapter of the show, you are lost in it.”

“It has something different, especially for non-Spanish people,” says his co-star Úrsula Corberó. She stars as Tokyo, the gang member whose irrepressible desire to drink rum and dance the salsa with strangers sets a shocking series of events in motion. “We have this way of expressing ourselves, of exchanging our feelings that goes through the screen.” Pina agrees that cultural specificity is one of the show’s main selling points: “In Money Heist, feelings, fraternity and love are as important as the plots. A perfect heist, rational and cool, becomes something else when spiced up with Latin emotions.” The tragic dynamic between the Professor and his love interest-cum-arresting officer Raquel (Itziar Ituño) is a compelling example of this contrast in action.

If there is such a thing as a quintessentially Spanish heist drama, then, this is it. It’s not grittily downbeat like its British equivalents or pared-back like Scandi crime shows. Rather, says Pina, Money Heist is rooted in Spanish literature’s great foundational text: “To rise up against the system is reckless and idealistic – [it’s] Don Quixote! Yet I think it’s much more Latin than Spanish; more passionate. In that, it differs from the English ‘perfect heist’ genre, which is cooler, more restrained, more scientific.”

Restraint has hardly been necessary for Pina and his writing team, since Netflix once again upped the show’s budget for the new season, enabling an exciting range of high-octane stunts and ever-more lavish production values (in July, Variety estimated the previous season to be Spain’s biggest-budgeted series-per-episode ever).

According to Corberó, Money Heist’s passionate characters can be unpredictable even for their co-creators: “If, by this time, we didn’t know our characters well, it would be unforgivable,” she says. “But the scriptwriters still have the ability to surprise us.” Indeed, at the end of season three, the Professor experienced a trauma that – it is strongly hinted in the trailer for season four – will lead the usually rational character to behave more erratically. “I think characters should always develop and evolve. If they don’t, they are flat,” says Morte. “I used to be the kind of actor that would read a script and I’d think: ‘Oh my God! My character would never say that!’ Now I’ve changed my mindset. All the characters, especially the Professor, still have many things to show.” Fan sites are awash with speculation on what exactly that could be. Will he seek bloody revenge on the police? Or descend into madness?

There is also a political edge to the series’ “anti-system” philosophy, which is invoked whenever we hear the gang’s borrowed anthem, the Italian protest song Bella Ciao. “First and foremost, the series is meant to entertain, but an idea runs underneath,” explains Pina. “Scepticism towards governments, central banks, the system … This notion would not sink in unless it were formulated within an entertaining narrative. The action genre used to be considered shallow and superficial, and social movies as boring. Why not put these two concepts together?” 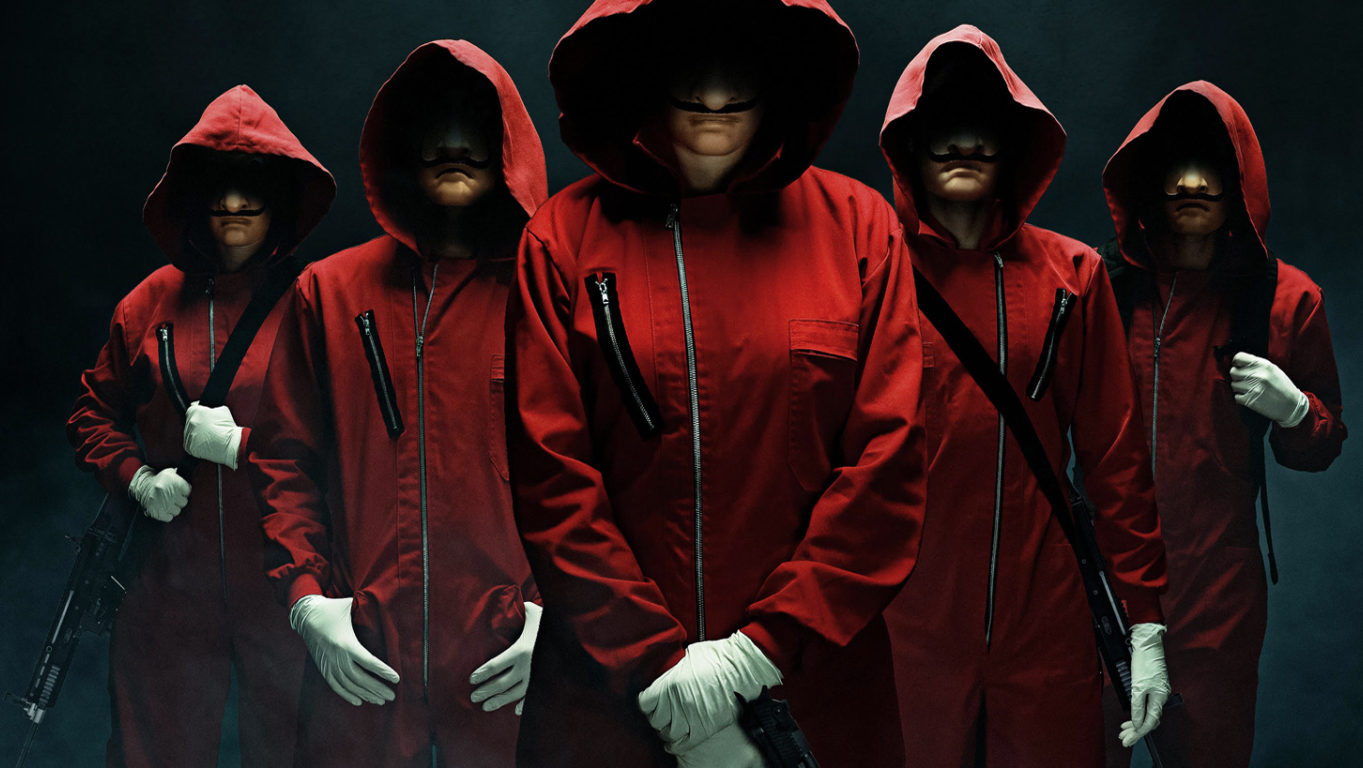 Because the 2008 financial crash, which set the scene for Money Heist, was a global event, it’s unsurprising that this escapist fable has resonated widely. For Morte, though, the show’s impact hit home for him while he was watching the news one evening: “On the Mediterranean, an immigrants’ boat was trying to reach the Spanish coast. When they were rescued, they started singing Bella Ciao. It’s something that will stay with me for ever.”

Despite international acclaim, at the end of 2019, the UK was one of the few territories where the show did not feature in Netflix’s Top 10. Latecomers would be well advised to catch up fast, though. While Pina won’t set an end date, it’s clear Money Heist is here for a good time, not a long time. “We’re here to tell whatever we need to tell in the shortest way,” he says. “We’re here to shoot guns at close range, to empty magazines tirelessly … we’d rather the audience switched off the TV with racing hearts than out of boredom.”

Money Heist: Part Four is on Netflix from Friday 3 April