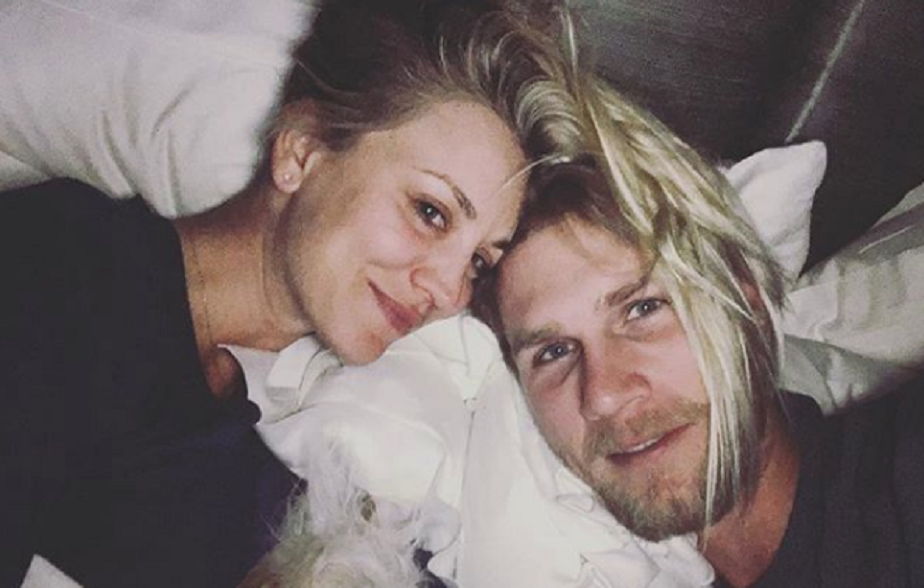 Kaley Cuoco brought up the tabloid rumors that she and Karl Cook are headed for divorce in one of her latest Instagram videos. After her shirtless husband ignored something that she had said to him and instead talked about his underarm odor, The Big Bang Theory star joked that there might be some truth to the reports that their marriage is doomed.

On Sunday morning, Kaley Cuoco took to her Instagram stories to share a video that was seemingly filmed shortly after she and Karl Cook woke up. Kaley’s husband was shirtless, and he was seated at the kitchen counter with his phone sitting in front of him. It’s unclear what the couple was talking about before the video started rolling, but Kaley was seemingly irritated with Karl for not listening to what she was saying.

“Can you please pay attention to me?” Kaley asked her husband, who she’s been married to for over a year. “You know, the world thinks we’re getting a divorce.”

The professional equestrian did talk to his wife, but Kaley wasn’t thrilled with what he had to say. She also seemed less than impressed with what he did.

“Yeah, I need to put on some deodorant,” he said. “Because I smell.”

Karl then proceeded to lift up an arm and smell one of his armpits.

“Oh my God,” he said in reaction to the scent.

Another World Cup Qualifier , another top 5 finish for my hubby and his phenomenal horse! Now if he would only put that drink down and take a picture with me lol cheers!! 🍷 🎉🐴 @mrtankcook @pomponioranch

Kaley then flipped on a light switch and turned the camera on herself, giving her viewers a look at her makeup-free face and wild hair, which was pulled up in a messy bun. She raised her eyebrows, widened her eyes, and let out an exasperated sigh in reaction to her husband’s words and actions. However, the two were clearly joking around. Karl shot a little grin at his wife after smelling his armpits, and Kaley added a playful caption to the video of their early-morning interaction before sharing it with her fans.

“Maybe the news is onto something lol,” it said.

She also added the words “Sunday Scaries” to her video, choosing a green font that looked like dripping slime.

As previously reported by The Inquisitr, Kaley Cuoco’s camp recently shot down a rumor that the 33-year-old actress and her second husband have been fighting so much that they’re headed for a split. Kaley’s latest Instagram video is evidence that she and Karl Cook are still very much together, and they clearly enjoy poking fun at the consistent tabloid tales about how their romance is supposedly on the rocks.