Now we’ve all stopped being distracted by Loki’s apparent death and that impeccable post-credit scene, can we take a moment to unpack the seriously weird (and Hel-la creepy) romance that’s being forced brewing between Loki and Sylvie?

Four episodes in, and the very first inkling that we got of anything simmering under the surface (besides, perhaps, deep contempt from Sylvie’s side) came while sitting on a moon waiting for the apocalypse. Born from a realisation that they’d run out of tricks, and were about to meet their ends, Loki and Sylvie got philosophical about what it actually means to be a Loki.

Perhaps it means they always lose, muses Sylvie. But Loki responds by saying it’s that they always survive. Through the touch of an arm, the pair connect, causing a particularly steep branch to veer off from the Sacred Timeline. Watched on by Mobius and Hunter B-15, it’s commented on that they’ve never seen a branch quite like it before.

The implication is that by forming a romantic connection to one of his variants, Loki has created the chaos which the universe craves and has therefore once again disrupted the order of things. Well, he is the God of Mischief.

But with everything we know (or don’t) about the TVA, was there actually something else at play here? Loki and Sylvie were about to die – something which Loki poignantly noted was out of the ordinary for them – so could this have been the cause of the disruption instead?

For a moment we wondered whether the hinted love story was one big red herring to hide a greater plot twist. That, we could get on board with at least. But since episode four was released, quotes from head writer Michael Waldron seem to have confirmed that the feelings between Loki and Sylvie actually form a key part of the show’s overall story. 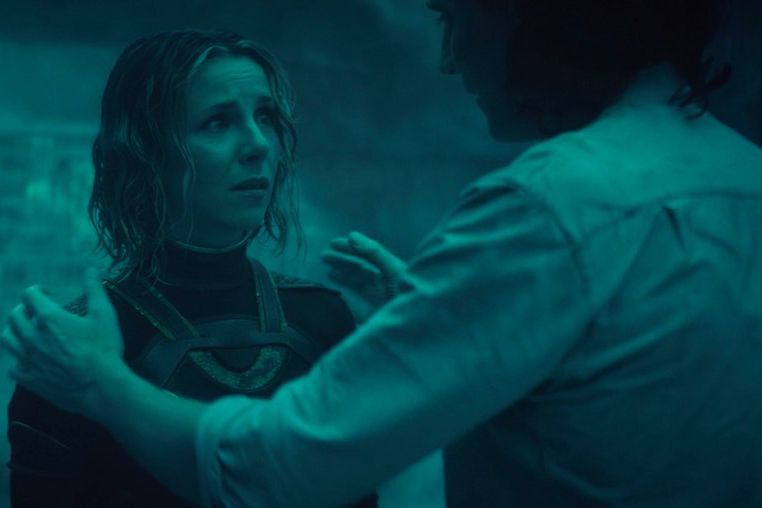 “That was one of the cruxes of my pitch [for the series], that there was going to be a love story,” Waldron told Marvel.com. “We went back and forth for a little bit about, like do we really want to have this guy fall in love with another version of himself? Is that too crazy? But in a series that, to me, is ultimately about self-love, self-reflection, and forgiving yourself, it just felt right that that would be Loki’s first real love story.”

Because of course, let’s not forget, Sylvie is a version of Loki himself. Not only does this add an extra special helping of weirdness to the suggestion of their relationship, but it also provides a commentary and insight into Loki’s psyche; as Mobius noted: “what an incredible, seismic narcissist, you fell for yourself!”

While we can see the tongue-in-cheek side to this, it doesn’t change the fact that we did a fairly big eye roll at Loki getting all mushy over his female self.

Marvel has a history of treating its female leads as love interests or vessels to advance the story of its male heroes – just take the time that Black Widow suddenly became all swoony for Hulk in Avengers: Age of Ultron.

While we have seen some improvements in recent years – Wanda was finally afforded the room to develop a strong character arc through WandaVision, and Captain Marvel also saw the MCU’s very first female-led movie, sans love interest (although in that instance, we would have championed the obvious subtext of her relationship with Maria Rambeau being made canon) – we haven’t quite made enough strides to be able to appreciate Loki without that baggage.

Why couldn’t Loki and Sylvie team up and take down the TVA, and all its time travelling nonsense, together, as equal partners, without having to fall into such an obvious and tired trope?

Some have also criticised their romantic development in light of the confirmation that Loki is bisexual. It is also true that Marvel has a terrible reputation when it comes to its LGBTQ+ representation, which is likely why many are questioning whether the same emphasis on a “love story” would have been given had the fellow lead variant been a male one.

Still, it’s important to highlight that bisexual folk are still bisexual even if they happen to be in a relationship that presents to others as ‘straight’. Loki – who is also gender fluid – falling for Sylvie does not undo this earlier reveal or change his identity.

Should Marvel ever finally get to a place where each of its characters is afforded the same treatment regardless of gender or sexuality, perhaps these kinds of story developments wouldn’t evoke such strong feelings. But, as if we needed further proof, we’re just not there yet.