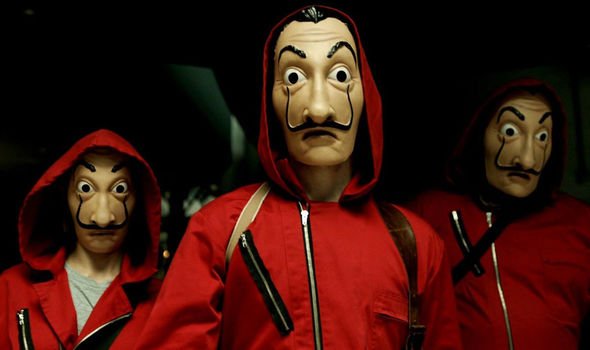 When the gang raided the Royal Mint, Mónica (played by Esther Acebo) had just told general director Arturo Roman (Enrique Arce), who she’d been having an affair with, that she was pregnant and the baby was his. But as the first season of Money Heist got under way, it was clear Arturo didn’t care about Mónica or the baby as she tried to use her to steal a phone, which led to her falling for Denver (Jaime Lorente).

When it was revealed Mónica had stolen a phone, Denver was told to shoot her but he couldn’t.

He eventually decided to shoot her in the leg and fake her death so he wouldn’t be charged with murder. After the leader of the gang, Berlin (Pedro Alonso), believed she was dead, Denver moved her to one of the vaults in the bank.

Whilst she was in there, Denver treated the gunshot wound in Mónica’s leg and convinced her not to terminate her pregnancy. Over time, Mónica fell for Denver and the pair decided she would become part of the team and they’d leave the Royal Mint together.

The pair successfully escaped and headed to Asia after the heist with Mónica taking on the name of Stockholm. As they spent the years travelling, they raised Stockholm’s son, Cincinnati, together, with Denver taking on a fatherly role.

For years, the pair have believed the youngster is Arturo’s son but now one fan thinks it’s possible the baby could be Denver’s after all.

Reddit user TheHippyDragon theorised: “What if Monica had gotten a false positive from her pregnancy test and Denver had actually impregnated her during or after the heist.

“After all, Arturo did mention he was infertile and had his other kids through artificial insemination.

“I know it’s just a thought that’s unlikely but if you sit down and think about it there’s a distinct possibility it might have happened even if it is, like I said, unlikely.”

If this is true, it could help to bring Denver and Stockholm back together after they started to drift apart in season three and four. It would also come as a huge blow to Arturo, who is now in the Bank of Spain and trying to manipulate the couple. As his parents rob the Bank of Spain, Cincinnati, has been left with a group of monks but there’s no guarantee he will see the pair again.

Fans have been infuriated by Denver and Stockholm’s behaviour regarding Cincinnati as he seems to have been forgotten.

Redditor theOnlyAC13 posted: “Do you guys find it weird that through the entire Season 4 there was not a word about Denver and Stockholm‘s son, Cincinnati?

“I just remembered it randomly. It was a pretty big thing in season three, or at least in the beginning.

“And no word of him in season four. We don‘t know anything about what happened to him.”

Cincinnati briefly appeared at the start of season three dressed as a mini Dali but has been missing since. Could he reappear in the five part of the series or could he be left without parents for good?