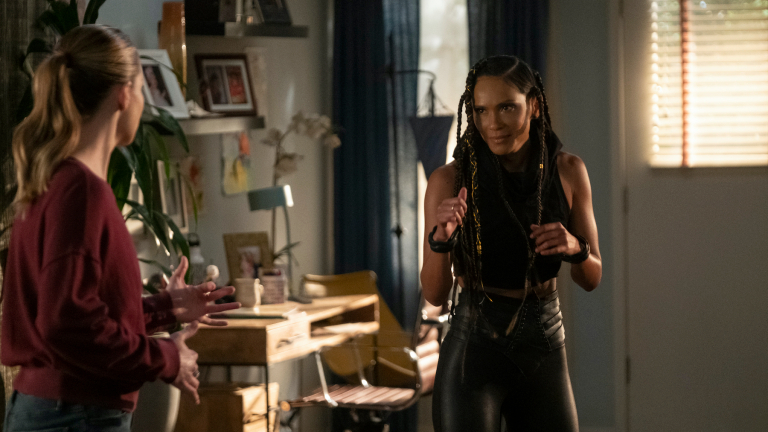 What the hell has happened to Chloe Decker? Has the time she’s spent with Lucifer Morningstar over the past five years changed her so irrevocably that she’s willing to break the law to solve a low-level mystery that only indirectly involves the LAPD? The final season’s second episode, “Buckets of Baggage,” offers up an enjoyable romp that awkwardly mixes the world of drag queens with the budding relationship between Ella and Carol. Still an enjoyable story but not Lucifer at its best.

But this is Lucifer, and things can change in the blink of an eye. We suddenly find ourselves in Hell with a completely different storyline and a much darker tone, and though the search-for-self theme still plays the central role in the season to this point, it’s clear that Lucifer’s siblings are not quite ready to cede God’s throne to their fallen brother. Whether the narrative decision to once again revisit the battle among the celestial siblings for ultimate control is the right one remains open for debate, but at least we now have a face to go along with the fishnet stockings and black leather boots. Brianna Hildebrand (The Exorcist) joins the cast as the magenta-winged angel intent on learning what it will take to bring down Lucifer once and for all.

Even though Carol adequately replaces Dan on the LAPD team, Chloe’s ex continues to play a vital role in determining Lucifer’s fate, and what he learns from his latest visitor is what we’ve suspected all along. Lucifer could have rescued Dan from Hell at any point. I’m generally not a fan of bringing characters back from the dead, and while we don’t know what’s actually going to happen here, I am intrigued to learn how Lucifer explains the lie he’s been telling Dan. Of course, that line of thinking also produces a fundamental narrative conflict – Lucifer doesn’t lie which then forces us to re-evaluate the angel’s contention. Dan immediately recognizes the manipulation, so it will be interesting to watch whether he uses his prior knowledge of the human/celestial coexistence to his personal advantage.

On one level it’s become increasingly painful to watch Chloe struggle with her identity after a highly successful career in the LAPD, but any time she and Maze get together, literally anything can happen. On the heels of Linda’s suggestion that Eve consider her impending life as the Queen of Hell’s partner, it’s obvious that life in the Silver City may not provide Chloe the type of challenges she needs. She hasn’t admitted that to herself yet and uses Maze to channel the buried hostilities regarding her future life. Still, the trashed apartment scene plays nicely against the opening scene in which Chloe and Lucifer wreak havoc in the penthouse during a vigorous sexual encounter. The two events are not dissimilar and speak to Chloe’s emotional turmoil.

Nevertheless, it’s Lucifer’s inability to commit to a life of selflessness that dominates the season to this point, and while it’s commendable that he sets out on a quest he thinks will ultimately qualify him to replace his father as God, more and more it seems he’s simply stalling for time. There’s a lot to like about Scott Porter’s portrayal of Detective Carol Corbett, but the dynamic interplay Lucifer enjoys with Dan just isn’t there. That said, when they go to the drag club to interview Busty Bazoongas, it provides Tom Ellis yet another opportunity to play the piano and sing, and per usual, he does not disappoint performing a smoky rendition of “The Lady is a Tramp.” Obviously, it’s a totally different set of circumstances now, and perhaps we just need to let Carol and Lucifer work things out.

While it’s true Lucifer has undergone a significant amount of personal growth during his time on Doctor Linda’s couch and his work with Team Lucifer at the LAPD, it’s beginning to feel as if this quest is simply a well intentioned act of futility. Nonetheless, there are some wonderfully funny exchanges that relate to Lucifer’s dilemma. “We argued like trailer trash in a Walmart parking lot on Black Friday,” Busty tells Lucifer before launching into a speech about facing one’s fears. And that does seem to be the crux of Lucifer’s problem; he doesn’t truly believe he’s capable of doing the job that needs to be done, and the closer he gets to ascending, the more terrified he becomes. Again, not dissimilar from his prior inability to tell Chloe he loves her.

Though it’s completely unfair and somewhat inaccurate to label Ella’s character as a supporting player in the overall arc, her role as Lucifer’s conscience now becomes even more of a driving force in this final season. She battles her own residual relationship demons, yet avoids a true crisis of faith and unwittingly forces Lucifer to question his own motivations and desires. On Linda’s couch, Lucifer clearly understands his own personal crisis. “How is it possible to care about all of them?” he asks, and it’s possible he already knows the answer. He can’t. As Carol interrogates his first suspect, Lucifer ironically intrudes in his selfish desire to help the detective he claims to dislike. “This is the voice of God.”

Lucifer’s fear ridden confession to Chloe that he may not be cut out to be God reveals a lot about where the series may head in its final leg. In the episode’s opening scene, Chloe responds to Amenadiel’s concern that no one currently sits on God’s throne. “Is the universe collapsing? Are frogs falling from the sky?” she tells Lucifer’s brother in an attempt to deflect from the true issue at hand – Lucifer’s reluctance to ascend and become God.

As we follow Carol and Ella leaving the theater after their date at a Jackie Chan film, we’re momentarily distracted. Have we ever seen her in a dress? “It’s the best date I’ve ever had,” he tells her before kissing her on the cheek. It appears to be a simple setup scene for the cute couple’s burgeoning relationship. Instead, we return to Chloe’s assertion in the opening scene. “Hey, if you’re still up there,” Ella says, “thanks.” And then a frog fortuitously falls on her car. Does she see this as a sign from God? Is the universe, in fact, collapsing?” Regardless, behind the scenes machinations are underway, and Lucifer’s path to God’s seat has gotten infinitely more precarious.

Though the season premiere makes it abundantly clear Lucifer is having second thoughts about becoming God, it still provides enough indications that eventually we’ll see him taking on the Big Guy’s job. “Buckets of Baggage,” however, reminds us that even the celestials suffer many of the same concerns as their human brethren. Still, even though he’s dead and in Hell, Dan may hold the key to humanity’s future.