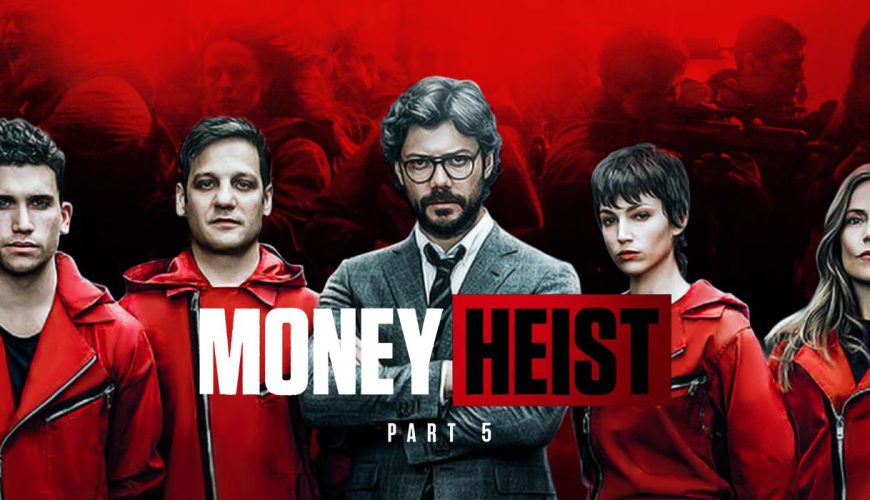 Ready or not, it’s time to go back to the Bank of Spain. Tokyo narrates from the afterlife as we watch her comrades and antagonists react to her death. Sagasta radios out to tell Tamayo, who gets a round of applause going in the tent — prematurely, given that Sagasta then reports on the five of his team members she took out with her. Tamayo orders Sagasta to abort the mission and evacuate with the commandos who remain, but Sagasta has already hatched a plan.

At Sagasta’s request, Arteche — the less injured of his team’s two survivors — gives him her dog tags, and Sagasta goes to the metal door Lisbon and Palermo had been cutting through: Vázquez, the other surviving commando, needs a surgeon. Palermo and Lisbon are about to pass through when Rio announces himself behind them …

… holding a rocket launcher because, in his opinion, they can’t keep trying to be the good guys. Gandía killed Nairobi; in response, they treated him and got him out only for him to turn back around and kill Tokyo. There was a time when Berlin would do all their dirty work — what would he have done with Gandía? Rio’s emotions distract him enough to let Lisbon knock the weapon out of his hands. If it had been up to her, they never would have tried to spring him from that Algerian prison, and Tokyo and Nairobi would still be alive. But this is where they are — Rio is alive, and he can’t do anything that will get anyone else killed.

Inside, Sagasta and Palermo sit to negotiate. Sagasta produces six sets of dog tags to prove the losses on his side. If they let Vázquez out, Sagasta will remain as their prisoner, but Palermo will only agree to let a surgeon in and takes Sagasta’s radio and gun while Lisbon and Rio search for any other commandos. Sagasta muses that Tokyo would have made a good soldier if she’d chosen the right side. “You still think there’s a right side?” Palermo shoots back. Sagasta doesn’t dispute that the world is full of bastards: Soldiers are bad, but terrorists like Palermo are worse. Palermo rejects Sagasta’s framing: “There are no right sides in hell.”

As Rio carefully picks his way through the wreckage in the kitchen, Tokyo’s voice tells us that some believe the spirit of a person who has been tragically killed briefly remains in the place where they died. Tokyo says the goose bumps rising on Rio’s arm are her way of communicating to him she was at peace. He remembers her telling him about her mother’s notion of little Silene drawing a magic door on any wall to summon her mother on the other side, and he uses the ash around Tokyo’s body to draw a magic door on his heart that she can open whenever she wants.

I realize we had to get Tokyo’s ghostly apparition for this moment, but maybe someone else could have stepped in for Rio so he wouldn’t have had to see her physical remains? Whatever condition she ended up in, it’s bad enough that we viewers don’t see it.

The crew’s next move is for Lisbon to broadcast an update live online: Seven* people are dead including Tokyo. Lisbon asks the crew’s supporters for forgiveness for the war their rescue mission has become. They’re no longer worth applauding — and they’re probably never getting out, Rio adds as he joins Lisbon on camera — so the “red tide” outside the bank should leave. The crowd disagrees, immediately starting a “We’re not leaving!” chant. Tamayo is furious: Lisbon beat the cops to define the narrative, so even if he tried to manipulate the media with the soldiers’ family photos, it wouldn’t work. (Not that those soldiers necessarily deserved to die, but it was established in the first part of the season that many of the commandos were war criminals, so I’m not sure how much effect Tamayo’s plan would have had once the media started digging into their service records.) Ángel snits that there’s a difference: Lisbon’s feelings are real. Tamayo then has to rush out to handle an emergency call from his wife, but what could that be about?!

Well, let’s backtrack to what has been happening at the hideout. While the Professor loses it in the bathroom, Sierra takes advantage of his distraction to take her clip and slip out with Victoria, using the cuticle nippers she stole from the medicine cabinet to hot-wire one of their vehicles. The Professor — assured by Lisbon that they will stick to the plan while he deals with Sierra — gives chase in one of the remaining vehicles; Marseille takes the other. Soon the Professor is popping up on Sierra’s dashboard screen — she can’t turn off this “safety feature” (doesn’t seem very safe to forcibly compromise a driver’s attention by pulling their eyes off the road?), and he’s tracking her on GPS. While Sierra needles the Professor about his narcissistic need to pull off one last spectacular job, Marseille gets off the highway and comes straight at Sierra. She orders him off his collision course, and he begs her to quit acting crazy. “I’m not acting crazy,” she replies. “I am crazy.” She’s certainly crazier than Marseille, who loses both the game of chicken and two tires to Sierra’s handgun while she doesn’t so much as slow down passing him. The Professor eventually follows her to a farm and finds her in the barn, gun drawn. He draws his, too, admitting that, though his life with Lisbon was “a dream,” he still had dreams of his own and couldn’t stand the idea of dying without robbing the Bank of Spain. Sierra congratulates herself on being right about his ego; when he cocks his gun, she predicts he won’t be able to shoot. She’s not right about that …

… so it’s a good thing she emptied his clip before she left the hideout with hers. They’ve both emptied their clips, she says. Now what? Well, apparently, now she’s going to get him into the trunk of the farm’s car, bound and gagged; she takes his glasses and leaves his earpiece on the ground. (If she really has emptied her clip, I’m not sure how she got him into the trunk in the first place?)

This is where Sierra’s story intersects with Tamayo’s once again: When he gets home — hitting the panic button by the door — he finds his wife gagged and held at gunpoint by Sierra, who knew about the Professor’s blackmail back in “Your Place in Heaven.” So if she’s there, where’s the Professor?

Sierra triumphantly puts on his glasses and says he’s in her custody. Which is true-ish: He’s chewing through the foam under the stolen car’s upholstery to get himself into the back seat and use the gear shift to wiggle out of his ankle restraints. He can’t make out the street sign without his glasses but infers his location by remembering his research on Tamayo. Upstairs, Sierra offers Tamayo her terms: If he takes back his slander against her and resigns, she’ll hand the Professor off to him so Tamayo can bring him in and be a hero. If he doesn’t, she’ll pull a Lisbon and switch sides — but Tamayo tells her the cops are already en route. She knocks him out and takes off with Victoria just as the Professor gets one of Tamayo’s neighbors to buzz him in, racing to the door barely ahead of the cops and just in time for a departing Sierra to find him and jam her gun in his cheek. (Is she out of ammo or what?!) He reminds her he told her she would have to trust him and talks Tamayo’s unlucky neighbor into letting them into her apartment juuuuuuust as the cops race up the stairs past them.

The Spoils
• More flashback fun times with Berlin! Five years before D-Day, he and Marseille land a helicopter on an offshore oil rig, where Palermo introduces Berlin to Bogotá. Berlin convinces the rig’s foreman to let him steal its extractor pump (currently being used in the heist) by claiming he’s going to fix it — and even gets paid in advance for the repair job. Start getting hyped for that spinoff!

• In the quiet moment immediately after Tokyo’s death, Denver admits Manila was right: Even in his “paradise” with Stockholm, he contrived reasons to sneak off clubbing once a week, so maybe he hasn’t grown up so much after all. (Manila points out they used to go to the clubs every night, so he has made some progress.) He admits he never stopped thinking about his great times with her and even called her once from Indonesia. Manila is heartbroken he’s putting the responsibility of stepping aside on her — and then they kiss! It seems like Denver has spared her by making the choice himself, but after admitting the surgical team, Stockholm — no longer high on morphine — promises Denver she’s feeling better now. If they die in the bank, she doesn’t want them to be in a state of doubt about their relationship: She loves him. He loves her too. And then they … have sex? I get that emotions are high, but is now the time?!

• *As of the end of this episode, we still don’t know where Arteche has hidden from the crew. What’s Sagasta’s plan?