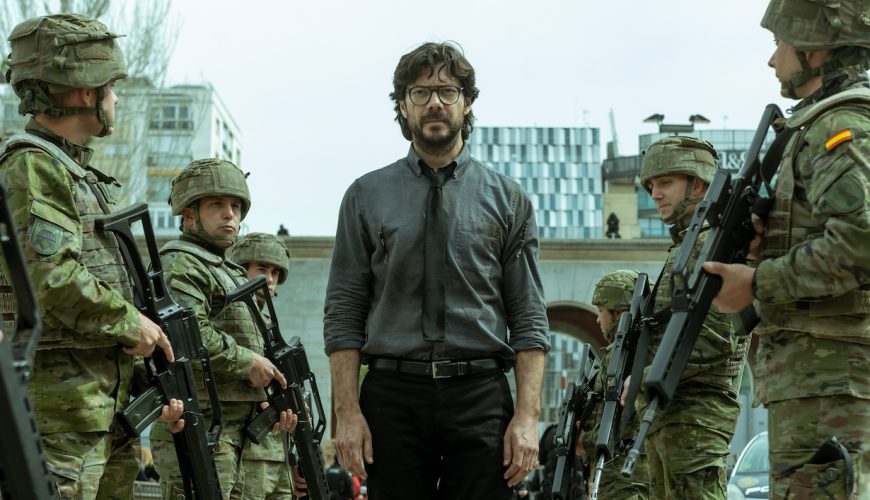 In it, The Professor (Álvaro Morte) is haunted by his actions and their fallout, while his heist team and the special forces prepare for all-out war inside the Royal Mint of Spain. In title cards and description, Netflix is dubbing Money Heist season 5 “Volume 2” as the end to the world’s greatest heist. Netflix has released a bunch of new images from Money Heist season 5 “Volume 2” as well.

The Professor (Morte) arrives in a red Beetle at the start of the Money Heist season 5 “Volume 2” trailer, feeling like he’s surrounded by the ghosts of Christmas past. He’s greeted instead by Spanish soldiers. A crying Rio (Miguel Herrán) reiterates the bombshell development from season 5 “Volume 1” — Tokyo (Úrsula Corberó) is dead — before he’s comforted by Lisbon (Itziar Ituño). Elsewhere, the cop Alicia Sierra (Najwa Nimri) rubs in what The Professor is experiencing: “You see the disappointed faces of the people you failed. It’s as if a javelin was hurled through your chest.”

As The Professor seemingly drives away in a car, the Money Heist season 5 “Volume 2” trailer cuts to the soldiers whose chief says: “We came in here to complete a mission: put an end to this heist. And that’s what we’re gonna do.” The soldiers prepare to barge in, as Palermo (Rodrigo de la Serna) says elsewhere: “I really doubt we’re gonna get out of here.” In reply, Helsinki (Darko Perić) tells Palermo: “You’ll get me out of here. You promised, and you’ll do it.”

The rest of the Money Heist season 5 “Volume 2” trailer is made up of action sequences, and the climax signals an ominous end for the red-suited thieves. How will it go actually go down? You will have to wait to watch the series on Netflix to find out.

How do you think La Casa de Papel / Money Heist will end? pic.twitter.com/t6P9NBRwxC

Behind the scenes, Pina is the creator and showrunner on Money Heist — and executive producer alongside Jesús Colmenar and Cristina López Ferraz. Javier Gómez Santander is the head writer on Money Heist season 5. The Netflix series is a production of Pina-run Vancouver Media.

Money Heist season 5 “Volume 2” releases December 3 on Netflix in India and around the world.