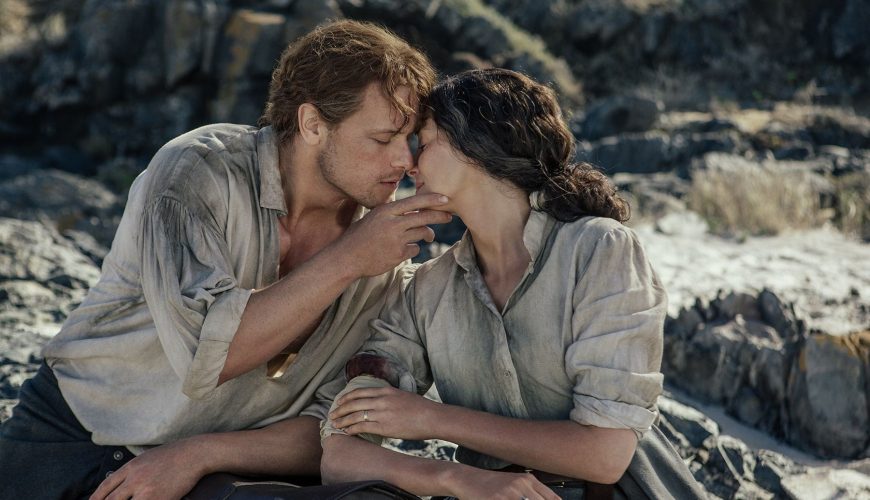 In recent years, TV shows as diverse as Euphoria, Normal People and Succession have all started employing intimacy co-ordinators on set – a crew member who works with actors as an advocate, making sure that they feel comfortable and safe during love scenes, simulated sex scenes, and those involving nudity.

An intimacy co-ordinator’s job includes choreographing a love scene, planning the level of nudity an actor is comfortable with and even working with costume departments on garments to protect an actor’s modesty or prosthetics, such as the fake breasts and penis used in the recent Pam & Tommy TV series.

Following the suggestion of Sam Heughan, steamy period drama Outlander now has its own intimacy co-ordinator, Vanessa Coffey, who joined the series for the filming of season six.

Digital Spy sat down with Vanessa, who has previously worked on series including Fate: The Winx Saga, the Billie Piper-starring I Hate Suzie, BBC’s Rules Of The Game and War Of The Worlds, to chat about her role as an intimacy co-ordinator, and her experiences working on the current season of Outlander…

How did you become an intimacy co-ordinator?
I fell into it in quite a weird way. I worked as a lawyer in corporate law, and before that, I trained as a dancer. After law, I went and retrained as an actor, so I had these three seemingly unrelated things that were floating around.

Then because of my work at the Royal Conservatoire of Scotland, which is also where Sam Heughan studied, I started putting things in place for actors who were coming to me saying “Can we have a conversation about my nudity rider, or my contract”, “What sorts of things can I put in place to make sure I am safe”, or “What kind of choreography can I look at to make sure this scene is exactly what I want it to be?”

What would people be most surprised to learn about your job?
I think the thing that would surprise people is the level of choreography that is involved in the role, there is a lot of movement background to it.

People sometimes come at this thinking this is just an agreement [between actors and directors], that it is about having open conversations, and of course it is about that, but there is a lot more to the role than that.

It is very specific and we come in with a host of movement tools that will really help the actors and support them in helping them make that distinction between character and actor.

You’ve worked on shows including I Hate Suzie, War of the Worlds and Wolfe – is Outlander very different to other series you have worked on?
I think it is fair to say there is a lot of intimate content on Outlander. I would say the volume of work is different on Outlander – there’s more!

Some of the cast of Outlander – such as Lauren Lyle and Cesar Domboy – haven’t done sex scenes in the series before. Do you approach intimate scenes with less experienced actors in a different way to those involving actors who have done love scenes before?
I actually don’t approach it in a different way at all. The questions are the same for everyone, really. It is really about what is this moment of physical storytelling, what are we trying to do physically?

“The unique scene feels natural and private throughout despite its surprise value – and it joins the already impressive list of sensuous scenes that #Outlander has become famous for” Thx @joberryreviews @LlaurenLyle @CesarDomboy @kmcheeseman https://t.co/cU9Lf3ZPIO

How involved are you in the process of filming a sex scene?
It starts well before we are actually on set. It will start months beforehand when I am given the scripts.

I look at those intimate scenes and usually the conversations will start with the executive producers to find out exactly what they want from the scene: what is this moment of storytelling that is so important? Why do we have that scene there, what does it do for us? And then having a conversation with the relevant director about their artistic vision so that we make sure that we are sticking with their vision for the scene.

Then it is having conversations with each of the actors about the level of the scene, whether that is in terms of nudity or simulated sex or any other form intimacy we have got, right down to kissing sometimes – it depends on the level of comfort of the actors.

Then it is having those really open conversations again with the directors and anybody else from the artistic team and the producers to say “Okay, these are our levels of comfort, how do we work within that?”

My name is Damyan Ivanov and i was born in 1998 in Varna, Bulgaria. Graduated high school in 2016 and since then i'm working on wordpress news websites.
News, outlander, Outlander 6, outlander season 6, TV Series, Vanessa Coffey