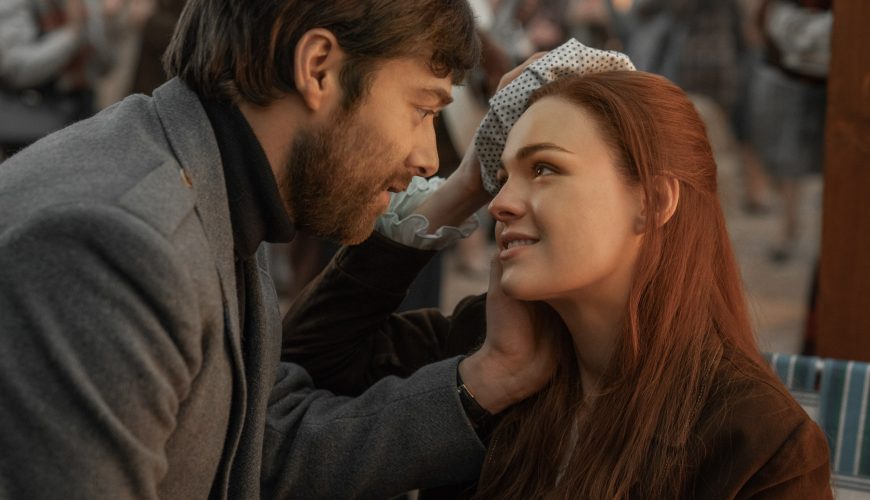 The wait continues for Outlander season 6 to arrive on Starz and unfortunately, we’ll be sticking it out for a little while still. As of right now, the plan is for the show to be back on the air when we get around to next year!

Still, let’s hand out some more kudos to the folks over at Starz, who remain rather kind on their tradition to share BTS photos during the hiatus. For the sake of the latest one, they’re also being a little timely, as well! If you look towards the bottom of this article you can see an image featuring Richard Rankin and Sophie Skelton’s characters, one with a sly reference to last night’s Met Gala. For those who aren’t aware, the theme for the fashion-forward event was “In America: A Lexicon of Fashion” There were a lot of inspired costumes for sure, but also some others that made fundamentally no sense at all.

Ultimately, what better way to commemorate the early days of American in costume form than what we get in Outlander? The outfits on this show are both period-appropriate and impeccable, and we imagine in season 6 that Roger and Bree will embrace this more than ever. After all, the two have made the choice now to remain in the past rather than going back to their own time; this means more defined roles in this world and also spending time with the family they love.

Given that America is on the brink of the Revolutionary War in season 6, we imagine already that Jamie and Claire are going to need all of the help that they can possibly get. Hopefully, we’ll get a better sense of what the future holds here (in the form of a teaser or a trailer) before the year comes to a close.

What do you most want to see for Roger and Bree when we get around to Outlander season 6?

My name is Damyan Ivanov and i was born in 1998 in Varna, Bulgaria. Graduated high school in 2016 and since then i'm working on wordpress news websites.
Behind the scenes, BTS, outlander, outlander season 6, photo, Richard Rankin, Sophie Skelton