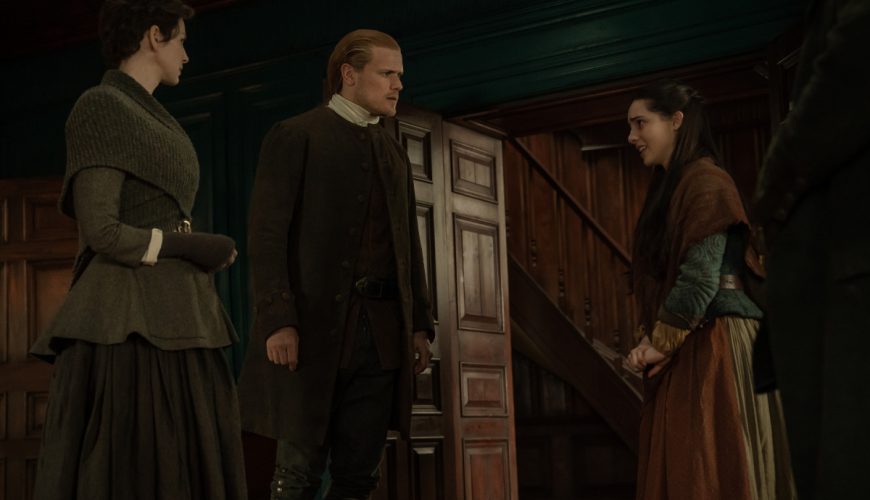 Outlander season 6 took a shocking turn in the emotional sixth episode titled “The World Turned Upside Down.” Numerous chapters of Diana Gabaldon’s sixth book — A Breath of Snow and Ashes — were packed into the episode before it ended on a massive cliffhanger. What does this huge plot twist mean for the final two episodes of the season?

Who killed Malva Christie at the end of the most recent ‘Outlander’ episode?
A dysentery outbreak hit Fraser’s Ridge in Season 6, Episode 6, which caused Claire (Caitriona Balfe) and several other residents to fall seriously ill. Claire was seemingly at death’s door for days, but was able to survive. However, as soon as the outbreak ended, Malva Christie (Jessica Reynolds) revealed she was pregnant — and named Jamie (Sam Heughan) as the father.

Despite the highlander’s insistence that he never slept with Malva, the Ridge residents didn’t believe him. Which caused them to quickly turn against Jamie and Claire.

To make matters worse, in the episode’s final moments Claire finds Malva dead in the vegetable patch with her throat cut. She attempted to save the unborn baby via emergency c-section, but the child didn’t survive either.

What does this huge plot twist mean for the final two episodes?
This ending may have come as a shock to many viewers. But for those who have read the books, they knew Malva’s death was coming. The question is — who killed Malva Christie?

The biggest suspect is Claire, who slapped Malva when she claimed Jamie was her baby’s father. Later — when she was under the influence of ether — Claire dreamed of confronting Malve with a promise to murder her.

Will the final two episodes reveal that Claire killed Malva? If the Starz drama stays true to Gabaldon’s books, the actual murderer is inside Malva’s own home. In the novels, the culprit is Malva’s brother Allan (Alexander Vlahos), who confesses to being the father of her baby.

The next two episodes will likely feature Allan confessing to Claire that he slept with his sister multiple times, and forced her to claim the baby was Jamie’s. He will also confess that he killed Malva because she wanted to tell the truth to Claire instead of continuing the lie.

Will Claire go on trial in ‘Outlander’ season 6?
After Allan’s confession, he is overcome with guilt and attempts suicide — which Claire tries to stop. However, Young Ian (John Bell) — who also slept with Malva — hears Allan’s confession and shoots him with an arrow from behind.

Another part of the story is that Claire goes on trial for Malva’s murder, and Tom Christie (Mark Lewis Jones) insists on taking her to New Bern for her safety. During their journey, he confesses that he knew about Malva’s behavior. But believes that both of his children were poisoned after putting fluids of the Sin Eater in their food.

He also reveals that as he beat Malva, she admitted she wanted Claire and her father out of the way so Jamie would help her raise her baby. Tom didn’t want Malva to try again and succeed. And as a result, he confesses to his daughter’s murder and takes Claire’s place so she can return to Fraser’s Ridge.