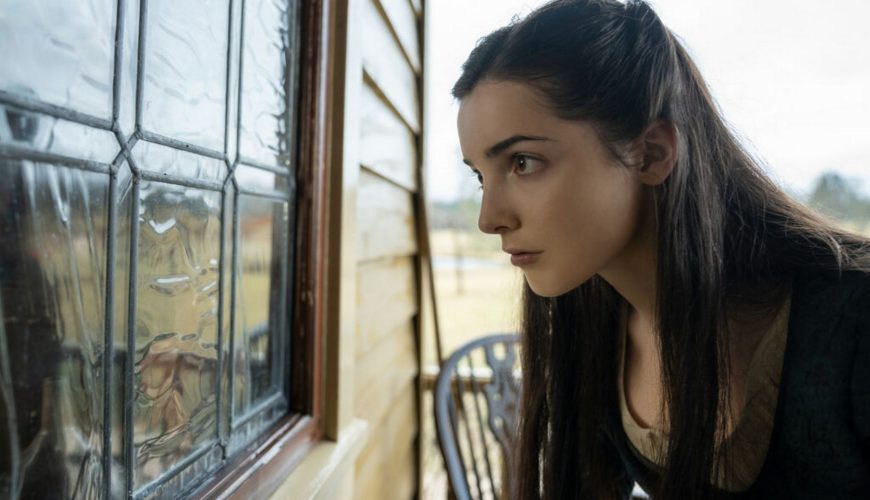 We all knew the Christie family would cause trouble for the residents of Fraser’s Ridge in Outlander this season. But even Claire couldn’t have predicted that the new arrivals would kick off a series of events that lead to our favourite time-travelling doctor being accused of murder by the gun-toting Committee of Safety.

Pious freemason Tom Christie (Mark Lewis Jones) – who was imprisoned with Jamie at Ardsmuir in Scotland decades before – moved to the Ridge in the first episode of season six, along with his son Allan (Alexander Vlahos) and daughter Malva (Jessica Reynolds).

At first it seemed like Allan would be the one causing problems after he stole a gunpowder horn shortly after their arrival, but as Alexander Vlahos revealed in an exclusive interview with Digital Spy, it was the entire Christie family that Claire and Jamie needed to worry about.

And murder, too, as it turned out.

While Tom warned his children to stay away from the Fraser family, daughter Malva was fascinated by them and with Claire in particular. It wasn’t long before she was helping out in Claire’s surgery despite knowing her dad would disapprove.

But then Malva liked flirting with danger, even going so far as to spy on Jamie and Claire when they had a literal roll in the hay in their barn.

Matters came to a head, of course, in episode six when Malva revealed she was pregnant and declared that Jamie – gasp! – was the father. (She cleverly backed up her story with a description of Jamie’s scars that she had seen when peeking through that barn door).

He denied it, and while it did emerge that Malva had been more than friendly with other Fraser’s Ridge men, including Young Ian (John Bell), there were many residents who believed Jamie was responsible, so the Frasers found themselves ostracised.

Claire and Jamie may have thought it couldn’t get any worse, but the episode ended with Claire discovering Malva’s dead body in her vegetable garden, the girl’s throat slit. Without thinking, Claire’s doctor instincts kicked in and she cut out Malva’s baby in an attempt to save it, but the baby was dead as well.

Being found alongside a dead woman and her baby, knife in hand, unsurprisingly led to Claire being suspected of Malva’s murder – but could she actually have done it?

Author Diana Gabaldon’s sixth book, A Breath Of Snow And Ashes, does hold the answer of course, but we wouldn’t put it past those devious Outlander TV producers to change the outcome in the series as they have done so before — most notably bringing back fan favourite character Murtagh (Duncan Lacroix) who died at Culloden in the books but lived for a few more decades and made it to America in the series.

Claire certainly had motive to kill Malva – which is all the evidence that the Ridge and Richard Brown’s sinister Committee of Safety seem to need. In their eyes, Claire killed her because Malva was having an affair with Jamie and carrying his child. It doesn’t help her case that when Jamie, Allan and Tom find Claire, she is standing over Malva’s body, covered in blood and holding a possible murder weapon (the pruning knife she used to deliver the baby).

You could argue that Claire is a healer and doctor who would never take a life on purpose – but then you’d be forgetting that she has killed before. Yep, Claire has form – she knowingly poisoned the Comte St Germain in the second season and stabbed an English deserter to death in the first season, too.

We’d be pretty shocked if Claire was the murderer, however, even though – thanks to the brain-numbing ether she’s been inhaling on a regular basis – she’s not that confident of her innocence herself.

It’s unlikely husband Jamie would have killed Malva either – imagine the fan outcry if Outlander’s ‘king of men’ was a murderer! – and there are other potential suspects for viewers to ponder on.

First up is Allan Christie, Malva’s brother. He must have heard the rumours about his sister’s secret relationships with men on the Ridge, and may have believed he would be protecting the Christie name if he disposed of his sister and her ‘bastard child’.

Then there’s Young Ian, who confessed to Claire that he had slept with Malva so could be the father of her baby. He’s so loyal to his family, and Jamie especially, that – if he wasn’t so completely adorable and lovelorn after his experiences with the Mohawk – it is possible he would go to any lengths to protect the people who mean most to him.

And let’s not forget pious, devout, and incredibly stern patriarch Tom Christie. He certainly would have been angry that his unmarried daughter was pregnant, but would that have driven him to kill her?

It’s difficult to be sure. When he was shown his daughter’s body, Tom asked Claire if Malva would have suffered or whether it would have been a quick death. That sounds like the question of a heartbroken father – until he adds another query: “No time to pray for forgiveness, then? A short prayer that would have made her right with God?”

And let’s not forget he then goes on to describe his own daughter and grandchild as “a whore and an illegitimate child.” Nice.

The murderer will, of course, be revealed when the Outlander team are ready (or you can grab a copy of A Breath Of Snow And Ashes to be pretty sure whodunit) – and with the War of Independence looming, the identity of Malva’s killer isn’t the only thing that Jamie and Claire need to worry about in the days to come…

Outlander season 6 streams on STARZPLAY in the UK and Starz in the US with new episodes every Sunday.