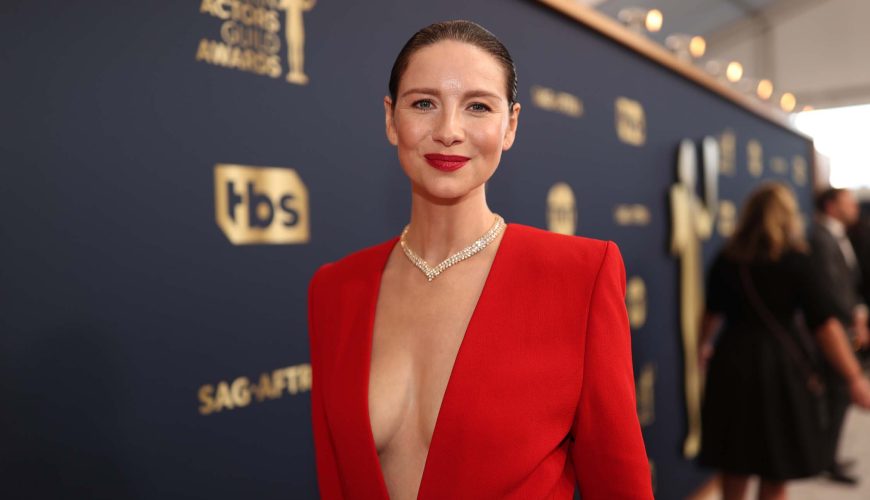 “I had to dig deep with Claire in a way that I hadn’t before,” admits Caitriona Balfe about the particularly challenging sixth season of the Starz drama “Outlander,” which explores a shattered Claire’s attempts at coping with the trauma of being abducted and brutally assaulted. “Last season we really got to explore a different side of Claire that I was kind of shocked that we were doing. When they first came to me with this storyline about the ether,” the actress reveals.

“I was quite intrigued but I was also a little bit like, ‘really, is that her? I don’t know.’ But actually, it was a really interesting way of showing with severe trauma how that can absolutely just blow someone’s psyche apart and when that happens, how does that person heal from that and come back from that? It was a really big challenge,” she says for our recent webchat, adding that “exploring what her deepest, darkest fears were was very interesting, but what I love the most about it is that we came out the other side and showed that from these kinds of trauma, you can really explore growth and show growth and show healing.” Watch our exclusive video interview above.

Season 6 opens with Claire (Balfe) and Jamie (Sam Heughan) back at Frasers’ Ridge in the wake of Claire’s brutal assault, while the threat of the Revolutionary War looms in the background. After a series of dramatic highs and devastating lows, the truncated sixth season (due to Balfe’s pregnancy and the pandemic) concluded with a riveting shoot-out followed by Claire’s wrongful arrest for the murder of Malva Christie (Jessica Reynolds). Balfe says that she is so proud of the season overall because cast and crew pulled it off under challenging circumstances, the least of which was that during production, the SAG and BAFTA nominee was expecting her first child.

“I was literally waddling from one place to the next,” she jokes about the difficulty of persevering through a physically demanding shoot while pregnant. “Trisha Biggar our costume designer did wonders,” she recalls. “We would have fittings every week to two weeks, where things would be getting let out, but she very cleverly created these those waistcoats I was wearing that loosen in the back,” Balfe explains.

Fans are now eagerly anticipating the supersized seventh season, with cast and crew already in the thick of production. “It’s been a really great start. I mean, I would say for all of us, this has felt like such a rejuvenation this season, because I think obviously last season was really tough. It was I think for everybody, just the circumstances,” she shares. “We were all locked down, it was a bit of a grind. It was a great season and we felt really proud of the work, but I think it was a really taxing season on everyone personally. But this season, maybe it’s just that we’re all like ‘oh, the world is open again and we’re all back,’ but it felt really strong,” Balfe declares happily, adding that they “all feel very organized; it just feels really great, so we’re all excited about it!”