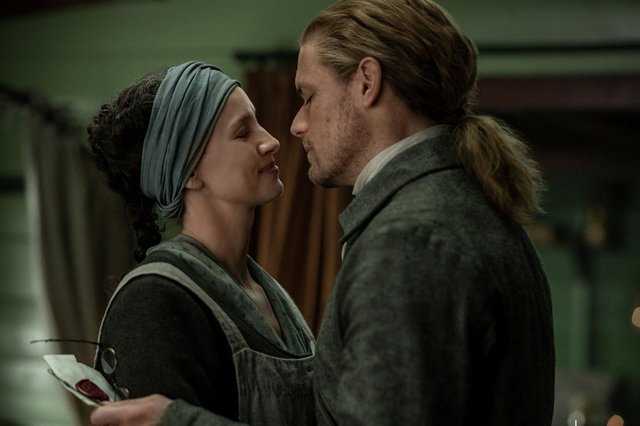 Caitriona Balfe claims she wasn’t paid the same as co-star Sam Heughan when Outlander first launched due to lack of experience.

Caitriona plays Claire Fraser in the on-screen adaptation of Diana Gabaldon’s historical fantasy series alongside Sam, 41, as Jamie Fraser. But the Irish actress has admitted that despite a possible salary disparity in the early days of the show, the pay issue was rectified as soon as it was brought up to bosses.

“I never really found out what our numbers were but at that time, there was a system,” Balfe said recently on Awards Chatter.

”If you had tested for a show previously, that put your quote at a certain level. If you had done a pilot before, that upped your quota as well.

“I know Sam had tested for a few things before.

“He had more experience in the business than I had before so when we started, I don’t think we were a million miles off.

“Once we brought that to the attention of people, they were great,” Balfe added. “They made sure that was rectified.”

The mum-of-one reckons her initial reduced Outlander salary had nothing to do with gender.

“Things have changed a lot,” she said. “I think it was just sometimes things, it’s just done. It’s a systemic thing and people aren’t thinking. I don’t think at the time it was any real choice to degrade me or anything like that. I think just people had their systems, that’s all.”

Once Balfe and Heughan attained pay parity with their Outlander salaries, they went to the next level together.

“We were on the floor every single day anyway,” Balfe added.

“We see what goes on, we see the issues, we see where improvements can be made and I think that’s the thing. It’s always for the betterment.

“When you love a project so much and you’re there every day, you know how things can be improved and that’s all you want.

“We were very anxious to be brought on in those decision making things and I think it was also just to keep both of us interested and invested.

“You don’t want to get stale on anything. So that’s where that came from.”

Caitriona previously spoke to Digital Spy in 2017 and revealed she hadn’t “knowingly” been paid less than a male co-star.

She told the publication: “Now, I’m in a position where I feel very comfortable speaking up for myself, and I do so.

“Maybe in the beginning of my career I wouldn’t have felt as comfortable doing that, but I think it’s really great that that conversation is out there and that women now feel empowered that they can demand equal pay.

Outlander season 6 continues Sundays on Starz in the USA and StarzPlay in the UK.

My name is Damyan Ivanov and i was born in 1998 in Varna, Bulgaria. Graduated high school in 2016 and since then i'm working on wordpress news websites.
Caitriona Balfe, News, outlander, Outlander 6, outlander season 6, Sam Heughan, TV Series