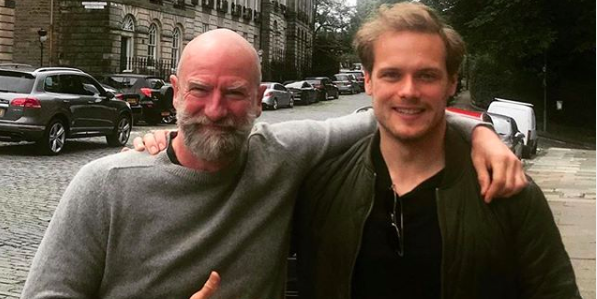 Outlander star Graham McTavish has opened up on his close friendship with Sam Heughan and compares him to his ‘unruly teenage son’.

The two Scots actors became fast friends during their time on the hit Starz historical fantasy show, where Sam, 42, plays Highland warrior Jamie Fraser, and Graham, 61, played Dougal MacKenzie before he met his demise. Since then, the two have co-wrote two books together, ‘The Clanlands Almanac: Seasonal Stories from Scotland’, and, ‘Clanlands: Whisky, Warfare, and a Scottish Adventure Like No Other’, as well as two seasons of their travel show Men In Kilts.

Speaking to Square Mile, McTavish revealed their first idea was a podcast. “Then we were gonna do GoPros,” he said. “I don’t know how that would’ve worked. One on my head, one on his? It was a ridiculous idea. And then we just said, ‘why don’t we just get a film crew together?’”

“We are very well suited,” he says, speaking of his close relationship with his co-star. “We’re very different in lots of ways. He’s kind of like my unruly teenage son and I’m his grumpy dad, in a weird, weird way. I mean, technically I could just about be his dad.”

Last year, Heughan was interviewed for Square Mile by Lucifer’s Tom Hellis, and the men took great pleasure in discussing their mutual friend McTavish and the first series of Men in Kilts. “It is a slightly dysfunctional relationship,” said Heughan. “We bicker quite a lot but I think that’s the joy.

“Graham plays these characters who are quite masculine, quite aggressive. He’s a character. He’s well built. But in real life Graham is a total teddy bear and extremely nervous around dangerous things. The joy of Men in Kilts was getting him to do things that he didn’t want to do.”

“Is he scared of heights and stuff like that?” asked a clearly delighted Ellis. “Oh yes,” said Heughan. “He’s terrified of heights. I got him to abseil. He refused point blank to get in a kayak with me despite trying to bribe him in every way. I got him on a tandem bicycle but he complained about that incessantly.”

“I imagine Graham’s language probably gets quite colourful when he’s scared,” said Ellis, the affection audible in his voice.

Heughan and McTavish wrapped the second season of Men In Kilts in early 2022, as the pair travelled and adventured around New Zealand. Speaking of the show, McTavish says: “We know who we’re gonna interview, we know where we’re going and that’s it. Everything’s very spontaneous and organic and surprising, as surprising to us as it is for anybody else. And that’s what makes it fresh and fun.”

When asked about a third season, he admits: “The logical place would be North America. Because there’s such a massive Scottish influence there, Canada and America.” Take Montana: “the McDonalds of Glencoe moved to Montana. I met their ancestors while I was filming there. They’re native American – so you meet this native American guy called Rob McDonald.

“There’s a whole history of how the Scots arrived. And there are many, many, many more stories to tell about the huge influence that the Scots have had, as such a tiny nation, on the world that we know, especially the English-speaking world.”

My name is Damyan Ivanov and i was born in 1998 in Varna, Bulgaria. Graduated high school in 2016 and since then i'm working on wordpress news websites.
Graham McTavish, News, outlander, Sam Heughan, TV Series