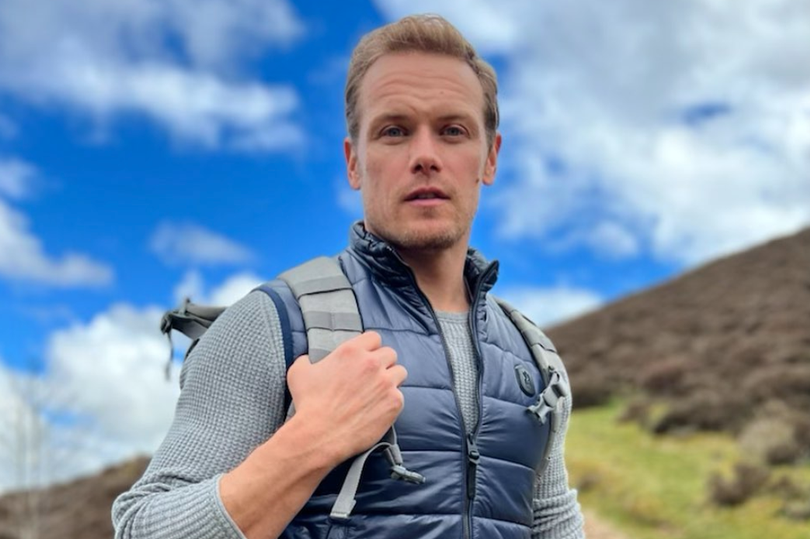 The actor better known for his roles as hero Jamie Fraser in Outlander will be showing a different side in the Hollywood film starring Priyanka Chopra, Celine Dion in her acting debut, Russell Tovey, Omid Djalili, Celia Imrie, and Lydia West.

It’s All Coming Back to Me follows a bereaved woman (Chopra), who starts sending text messages to her deceased fiancé’s old mobile phone as she struggles to cope with her grief. Unbeknown to her, the number has now been assigned to another man (Heughan), who is dealing with depression and his own loss. Over an exchange of text messages, the pair form an unlikely connection.

It’s All Coming Back to Me is a remake of the 2016 German movie SMS für Dic, which was adapted from the novel by Sofie Cramer.

Speaking exclusively to Express.co.uk. Djalili said: “Sam Heughan’s a great guy. I had a wonderful time with him. We even did some photographs for social media. Outlander is a great show actually and he’s a great actor.”

The acclaimed British-Iranian funnyman continued: “This film, I wouldn’t say it’s a comedy-drama, but there were certain bits of it which were comedic and he was very deft, very subtle, a very good actor.

He went on to say about the film: “It’s a very well-put-together story, I have to say. It was real page-turner when I was reading the script.”

Dajlili said he had more of a “cameo” role in the film but an important one propelling the story forward.

The comic explained: “I’m the owner of a diner and my wife has died as well and I keep giving Priyanka Chopra advice that then changes how she behaves. I think she comes in twice.

“I haven’t got a massive role but it’s a very important cameo role, where he’s almost like the spiritual guide to how she should behave with these texts that seem to come from a different realm.”

Djalili also praised singer Dion’s turn as “great”. He said It’s All Coming Back to Me was supposed to be released in cinemas this year but got pushed back.

Along with featuring in It’s All Coming Back to Me, Djalili is going to be returning to the Edinburgh Fringe Festival this year with his new show, The Good Times Tour.

He described the show as different to some of his previous work, serving as his reaction to the world.

The star said: “It’s called The Good Times Tour because it’s about the new normal. It’s about being in the pandemic, it’s about how the globe has changed and dealing with cancel culture, dealing with current discourses.

“I try to mine the funniest things that I’ve observed during lockdown and it’s kind of a review of the last two years, I would say.”

Djalili added: “I have no illusions about becoming the most relevant or the most brilliant or the most anything, I just want people to come and have a good time.”

He’s been touring since July 2021 following the coronavirus pandemic, which saw the comedian trying to continue doing stand-up to varying degrees of success.

He experimented with a Zoom gig where he was muted by over 600 people and even a drive-in gig.

Djalili has had an eclectic career spanning over 30 years, which has seen him featuring in everything from the Oscar-winning movie Gladiator, to his own sketch show to hosting the Queen’s Platinum Jubilee Horse Show, and more recently appearing in Netflix’s fantasy epic The Letter for the King and HBO and the BBC’s His Dark Materials.

His return to the Edinburgh Festival is something of a homecoming for the Djalili, who got his breakthrough there back in 1995 with his show Short, Fat Kebab Shop Owner’s Son.

Djalili has gone back to the Edinburgh Festival over the years but with the advent of the pandemic and lockdown, this return is even more poignant for the star.

Along with The Good Times Tour, he is going to be working on a new Persian-language comedy series after his initial show for BBC Persian was one of the most popular comedy programmes in the world with around 12 million people tuning in. Dajlili said it needed “a lot of preparation” but would be coming out in 2023.