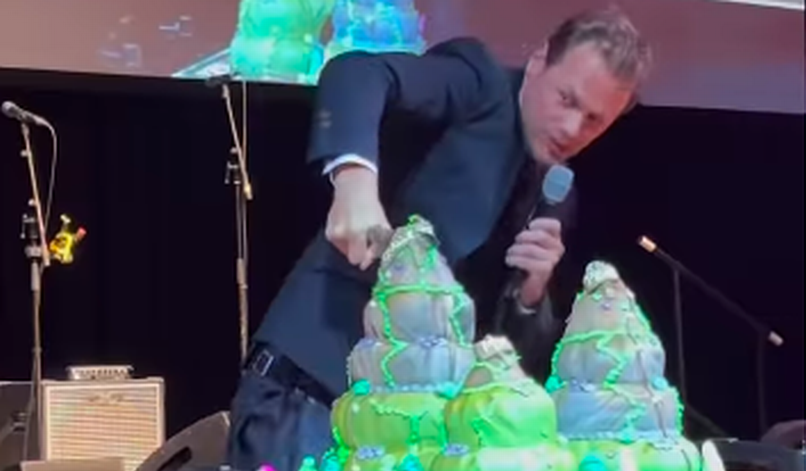 Outlander star Sam Heughan couldn’t have his cake and eat it when he was celebrating his birthday week.

Sam, who turned 42 on April 30, enjoyed a series of activities to celebrate his anniversary and the success of his charity fitness drive My Peak Challenge. He was presented with a special cake at the My Peak Challenge Gala in support of blood cancer, that was created in the shape of three mountain peaks.

And Sam, who has spent hours refining his impressive physique at the gym, was met with a real challenge on the day when it came to cutting a slice.

In a video which has surfaced on Great Glen Company & Sassenach Spirits co-founder Alex Norouzi’s social media, he is seen to be struggling with cutting the cake. Sam, who took a large knife to the designer dessert, had asked fans’ This way or this way?’ with regards to cutting it. After realising it was going to be a tough job cutting into it, he joked: “It’s made of wood.”

“I’ll keep doing this. You enjoy your dinner.”

Sam persevered however and managed to cut a small slice out of it. After seeing its blue interior, he then questioned: “Can I eat that?” before enjoying a nibble and cheering Happy birthday.

One fan said: “The lower layers were cake, but the peaks were made of fondant. Some Peaks are tough even for Coach @samheughan
Another added: “The birthday cake is harder than his muscles…”

Someone else said “Hilarious! Watching Sam cut into the very unique cake that obviously has some tough fondant icing!
And another person said: “I was a little scared for him to put that in his mouth but it looks like it was a “peak moment!”

A fifth said: He’s a born entertainer! Thank you for being such a game individual, Sam Heughan!”

My name is Damyan Ivanov and i was born in 1998 in Varna, Bulgaria. Graduated high school in 2016 and since then i'm working on wordpress news websites.
Men in Kilts, News, outlander, Sam Heughan, TV Series