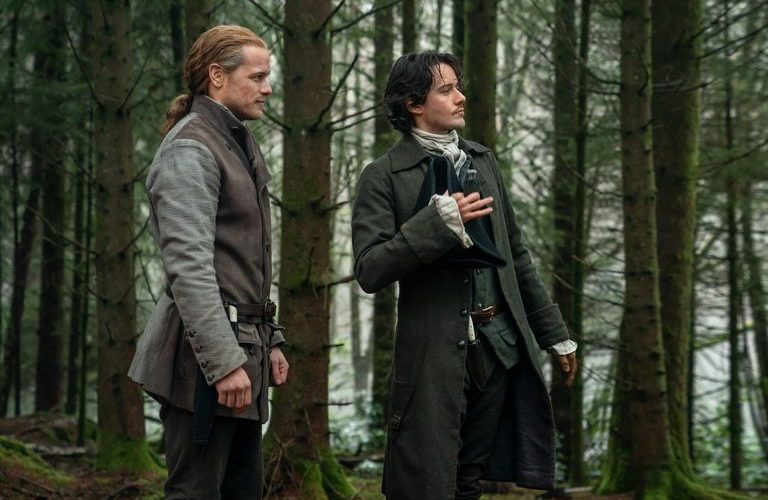 We’re five episodes into the sixth season of Outlander, and the dark clouds are already gathering above the heads of our favourite Fraser’s Ridge settlers as the American Revolutionary War draws near.

A nice mini break to Wilmington to visit with Aunt Jocasta and hear Jacobite heroine Flora MacDonald (a real life historical character) speak at a fancy gathering sounds like a good way for Jamie and Claire to forget all about their future troubles for a little while then, doesn’t it?

You’d think so, but this being Outlander, the Frasers’ trip has its share of bumps in the road, beginning when Mrs MacDonald reveals she discovered a man ransacking her room shortly before she was due at the reception. 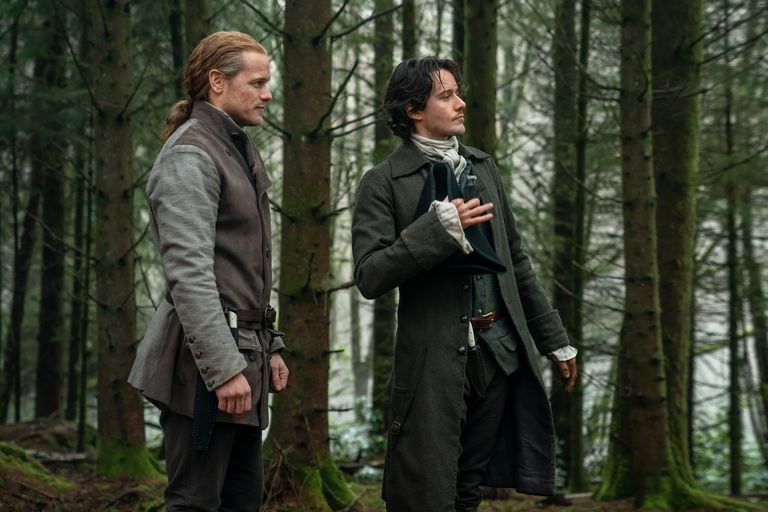 Luckily, the thief was apprehended outside the inn and arrested by the sheriff, and Flora’s stolen emerald necklace was returned to her – with one stone missing that was not found on the robber.

Her brush with a criminal doesn’t seem that notable in the general scheme of things – until, that is, we get to the last scene of the episode.

As Jamie and Claire get ready to head home, Claire hears a faint, whistled tune but dismisses it as the wind. The final scene reveals that she didn’t imagine it – a man is whistling a song from behind the bars of Wilmington jail.

He has the missing emerald in his hand, so must be the captured thief who robbed Flora MacDonald. We only see the back of his head and his long black hair as the episode ends – so who is he? 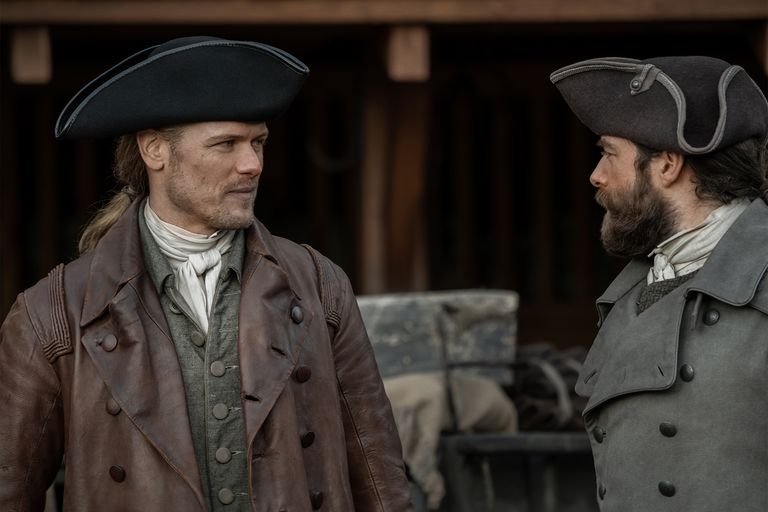 The song that the thief is whistling is the first clue – it’s the ‘Colonel Bogey March’, composed by Kenneth J Alford (the pseudonym of British Army bandmaster FJ Ricketts) in 1914 and, it’s best known as the theme tune to the 1957 war movie The Bridge On The River Kwai.

Only a time traveller – like Claire, Roger and Bree – could know a tune that was written nearly 150 years in the future. And we already know from the Fraser family’s experiences travelling through stone circles that you need a gem to be able to successfully go, well, back to the future, which would explain why this mystery man has Flora’s emerald in his hand.

Taking the prisoner’s long, wavy hair into account, the jailed thief must be none other than Wendigo Donner, whom Claire first encountered in the season-five finale. (We told you then that he would be back.)

One of Lionel Brown’s men Donner, who abducted Claire from Fraser’s Ridge, revealed that he was a time traveller to her by asking if she recognised the name Ringo Starr. He wasn’t one of the men who assaulted Claire, and was long gone by the time Jamie and the men of Fraser’s Ridge rescued her and killed all the men present. 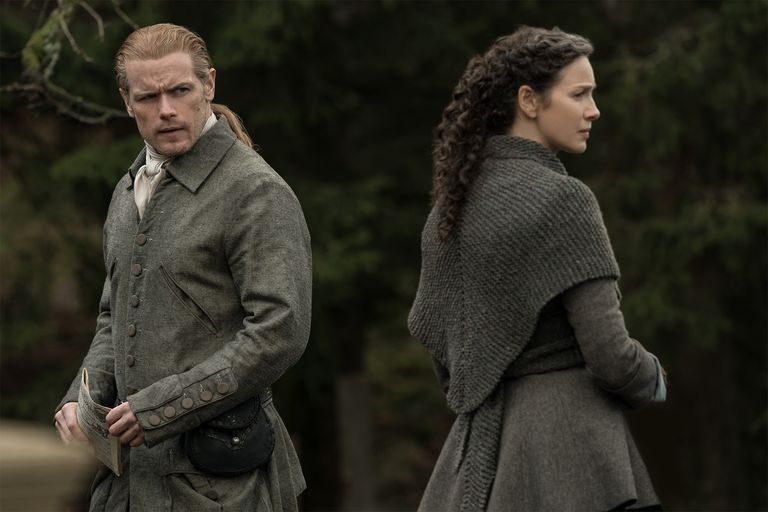 Claire figured out he was one of the ‘Montauk Five’ – a group of Native American activists who travelled back to the 18th century from 1968 hoping to persuade tribes to ally with British forces in the upcoming revolutionary war and change the course of history. (Claire and Jamie already know that meddling with history never goes well, having tried and failed to halt the Jacobite Rising that ended brutally with the battle at Culloden.)

Donner has no idea what happened to his fellow time travellers, but Claire does – she encountered the ghost of Donner’s companion Robert Springer in season four and also has his diary (Young Ian gave it to her in season five, having been gifted it by the Mohawk).

Springer had travelled further back in time than the others and he allied with the Mohawk where he became known as Otter Tooth, before he was eventually exiled for his ‘madness’ (talking about how in the future, Native American tribes would be almost wiped out) and killed when he returned to the tribe. 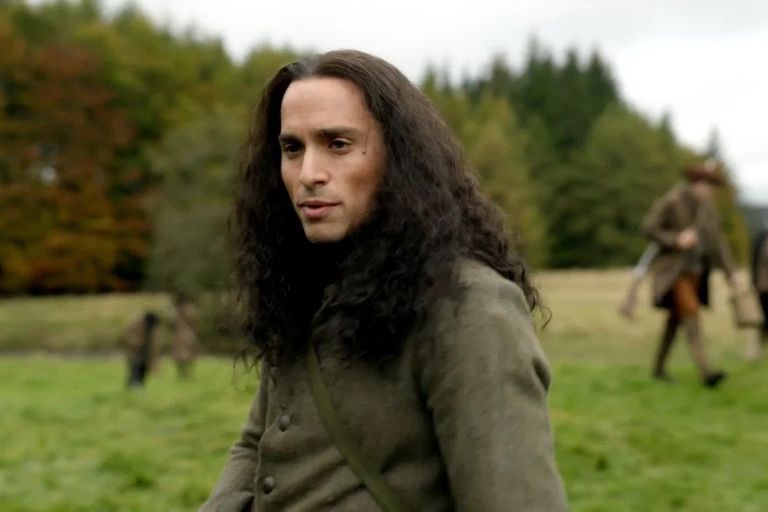 It remains to be seen what the reappearance of Donner will mean to Jamie and Claire. He didn’t seem to want to harm Claire the first time he met her, but her knowledge of where a stone circle is located in North Carolina could mean that he will come to her for help to return to his own time, and his recent crime in Wilmington indicates he may not ask for it nicely.

(It should be noted that Donner’s first name – Wendigo – is also the name given in Algonquian folklore to a cannibal monster or evil spirit, which doesn’t bode too well for the Frasers, either.)

Of course, fans of Diana Gabaldon’s books will know what happens next with Donner from the pages of A Breath Of Snow And Ashes, a storyline that we won’t spoil here. However, it’s safe to say that we haven’t seen the last of that whistling man, and his determination to return to his own time could impact Jamie, Claire and all the settlers on the Ridge in a devastating way in the final three episodes of this season…

My name is Damyan Ivanov and i was born in 1998 in Varna, Bulgaria. Graduated high school in 2016 and since then i'm working on wordpress news websites.
News, outlander, Outlander 605, outlander season 6, Outlander Season 6 Episode 6, Sam Heughan, TV Series