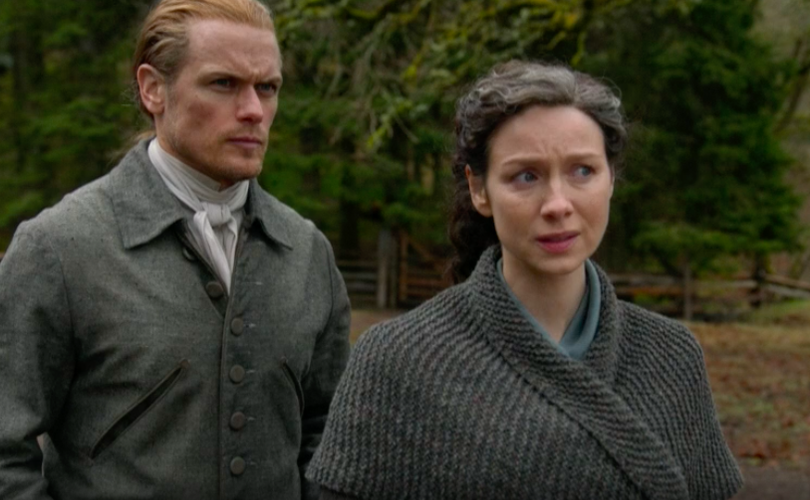 Fans of the hit show Outlander are left re-watching the earlier seasons until the new episodes come out next year, and are now left divided on a season four storyline.

The show has captured viewers hearts as the historical drama with a time travelling twist which sees the main characters in some messy situations. Fans are left divided going back over the show, specifically one storyline which took place between Roger Wakefield (Richard Rankin) and Brianna Fraser (Sophie Skelton).

Why didn’t Roger tell Brianna about the obituary?

Each and every season of Outlander involved the characters jumping through time, and each time it leads to some dramatic consequences. Back in season four, Brianna wanted to use the stones again, but not before Roger wanted to confront her about a discovery.

While searching for Brianna, he bumps into her roommate who informs him that she has returned to Scotland. Several episodes pass by until the pair are reunited, but when they are, Roger fails to inform Brianna about his finding – the obituary.

On Reddit, fans have been discussing the unusual moment, with some chalking it up to a plot hole in the show.

User Potential_Beach190 wrote: “So, Roger finds out Brianna went through the stones when he calls her up and her roommate says ‘oh, she’s gone to Scotland to see her mother.’ The reason roger is calling in the first place is to tell her that he found the obituary.

“Why then, later when he is reunited with her, does he say that he found out before she left but didn’t say anything?” (sic) However, another user doesn’t think it is a plot hole and offers an in-universe explanation for the loose plot thread.

User Penelpe_pig replied: “The implication is that Roger knew about the obituary for a while before he called to talk to her and found out that she had gone to Scotland ‘to visit her mother’.

“He told Fiona he wasn’t going to tell Brianna about the obituary.”

However, the evidence the fan uses to explain this is based on the books, so this might not translate over to the show as there have been several changes between the two in the past.

The user adds: “[In the books] Roger found the obituary and then discouraged Brianna from continuing to look for her parents in the past, hoping that she wouldn’t find the obituary because he knew she’d want to go back to try to change it, and Roger believes that you can’t change the past.

“Ultimately, Brianna continues looking but doesn’t talk to Roger about it, and finds the obituary on her own, and hides her plans to go through the stones from him.

“Everything about their relationship makes much more sense in the books.”

This still leaves the plot thread open in the show, as it has not been addressed since the events seen in season four. In season five, Roger and Brianna tried to use the stones again to return to the present day. However, upon doing so they found themselves still in Fraser’s Ridge, trapped in the 1800s.

Unable to escape the impending American Revolutionary War, Roger and Brianna will have to rise to the challenge of the dangerous world they now find themselves stuck in.

In the latest teaser for the new season, British redcoats are seen storming into Fraser’s Ridge.

This is likely just the start of the upheaval the couple and the rest of the characters will find themselves in during season six.

My name is Damyan Ivanov and i was born in 1998 in Varna, Bulgaria. Graduated high school in 2016 and since then i'm working on wordpress news websites.
outlander, TV Series