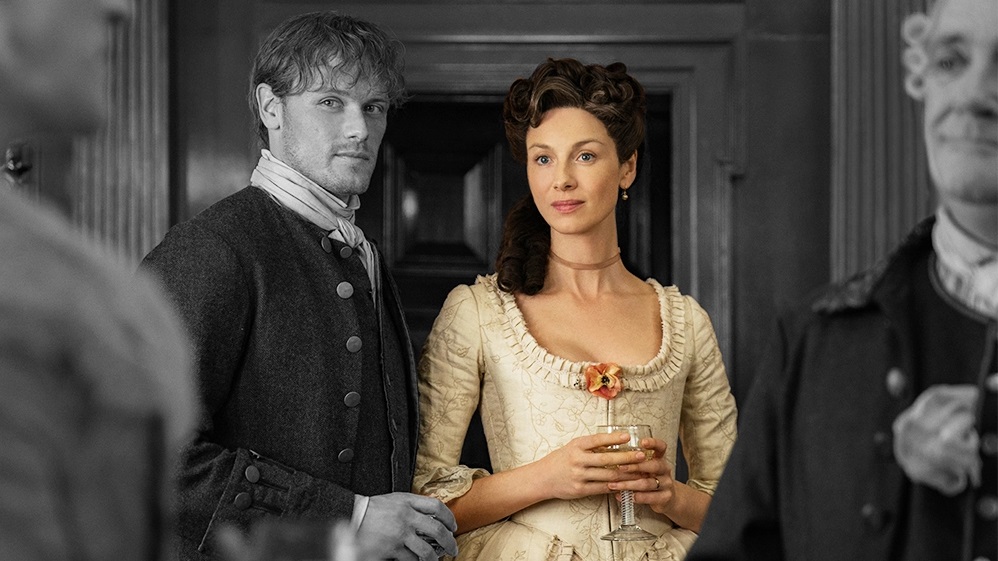 Outlander star Caitriona Balfe is best known for playing time traveller doctor Claire Fraser in the Starz series and has appeared alongside a host of guest stars.

Over the years, Caitriona Balfe and co-star Sam Heughan who plays highlander heartthrob Jamie Fraser have starred alongside a number of other Outlander guest actors including Laura Donnelly as Jenny Fraser, Tobias Menzies as Frank Randall and Graham McTavish as Dougal MacKenzie. Reflecting on their co-stars, Caitriona explained the cast does not put up with “divas” on set and warned against any egos.

Caitriona first appeared in Outlander in the series’ pilot episode in 2014 and has been a regular ever since.

Her character Claire’s love story with Jamie has captivated television fans and those who have devoured Diana Gabaldon’s novels of the same name.

The actress has always spoken candidly about working on the series and in an unearthed interview warned against any diva behaviour.

“Suzanne Smith does our casting, there has never been a bum note,” Caitriona explained.

“Not only are they incredible actors but they are so cool. We always say if someone walks onto our set and isn’t cool, they’ll hear about it very quickly.

“Everyone who comes on is just like awesome and we have a great atmosphere on set. Everyone just comes on and they’re all so talented actors.

“We work really hard and you’re there a lot so to keep that great energy that constantly comes in from other people it keeps us inspired and keeps us enthusiastic and ready to tackle new stuff because it keeps it fresh all the time.

“That’s important because when you’re getting like 10 months into 14-hour days all the time, I can imagine on something with less mutable that maybe things would get a little stale or you wouldn’t come with that fire everyday, I don’t know.

“I’m very glad that it is the way it is,” she added to Gold Derby.

Caitriona recently wrapped filming on the sixth season of Outlander which is expected to air in early 2022.

Fans were sent into a frenzy when Starz decided to share a behind-the-scenes snap of the actress playing Claire in her beloved surgery.

The official Outlander Twitter account posted: “Behind the scenes in Claire’s happy place (and mine, to be honest). #Outlander.”

Claire can be seen in the image wearing an apron as she watches a candle burn in front of her.

It’s not known exactly what she’s up to but eagle-eyed fans spotted a male hand behind her – does it belong to Jamie?

One replied to the post: “Claire’s happy place is my happy place goals. That’s surgery is so beautiful.

“Also is that Jamie’s hand I spy?! Because we all know HIS happy place is wherever Claire is.”

Another fan commented: “I was wondering that too but also thought maybe it’s a patient she is attending.”

It comes amid speculation Claire will have an affair with Jamie’s former enemy Tom Christie (Mark Lewis Jones).

Fans of the books know Tom harbours a secret crush on Claire which he doesn’t admit to until he helps her clear her name of murder.

Outlander seasons 1-5 are available to stream on Amazon Prime Video and Starz now.