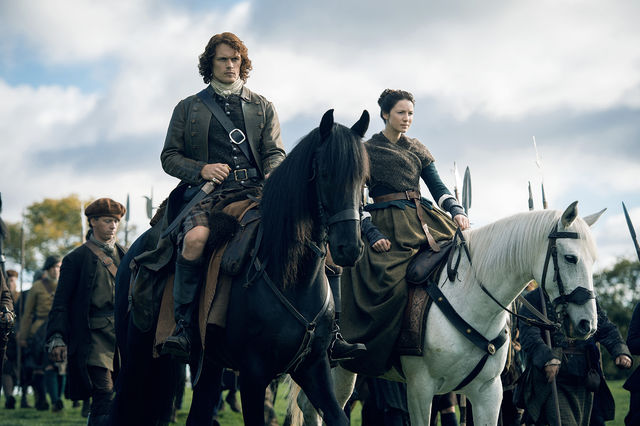 Filming for season six of Outlander has officially come to an end, and fans are eagerly awaiting the time-travel drama’s return in early 2022. Ahead of the series’ next season premiere on Starz, some worrying clues from the Scotland filming location may have hinted towards the departure of two key players.

Brianna (played by Sophie Skelton) and Roger Mackenzie (Richard Rankin) could be saying goodbye to Fraser’s Ridge in the next season of Outlander.

The daughter of Claire (Caitríona Balfe) and Jamie Fraser (Sam Heughan) and her husband received a shock at the end of last year’s gripping fifth instalment.

After deciding to return to their lives in the 20th Century, they entered the stones and ended up right back where they started, much to the bemusement of Young Ian (John Bell).

For now, it appears their true home is with their family on Fraser’s Ridge during one of the most tumultuous periods of American history.

However, certain fans believe Bree and Roger will make another attempt to return to their original timeline at some point in season six.

Now, a new clue spotted from the set of Outlander’s next outing may have proven their theories.

Fans took to Reddit to debate what the latest updates from set could mean when they spotted some locals on Twitter claiming the couple’s cabin had been deconstructed.

User hiddkesbatchunited first speculated: “The dismantling of R&B cabin proves that they are going ‘back to the future.’”

Down in the comments, they clarified: “They’d dismantled it for the shooting there not in the storyline but the set itself.”

Filming for season six has recently come to an end, so this may be the simplest explanation as to why the cabin set is no longer there.

Even so, others have insisted that the removal of the cabin this time round was unusual for the production, as it usually remains in place between seasons.

Another fan replied: “I found some tweets from the locals saying the cabin isn’t there anymore, while, I think, it still stood in its location in-between the other seasons.”

The tweets in question read: “Took a trip to Doune and popped into see old Fraser’s Ridge.

“Unfortunately it’s now being dismantled. There was also a small cabin built which I was told is Bree’s workshop but this has also been dismantled now.”

And the original poster added: “And anything else would mean they’d pay set designers twice to rebuild it and I really don’t think they’ll do that fingers crossed.”

Bree’s workshop may have simply been on its way out after frequent use over the last couple of seasons of Outlander.

But the unusual removal of the sets has still sent alarm bells ringing within the fanbase, and could point to Bree and Roger’s separation from the rest of the Frasers.

In the ongoing interim between seasons, some fans have picked up Diana Gabaldon’s original series of novels for clues, the next instalment being based on A Breath of Snow and Ashes.

Still, the TV adaptation has already made several dramatic departures from the events of the books, so fans will just have to wait for the season six premiere for their questions to be answered.

My name is Damyan Ivanov and i was born in 1998 in Varna, Bulgaria. Graduated high school in 2016 and since then i'm working on wordpress news websites.
News, outlander, outlander season 6, TV Series