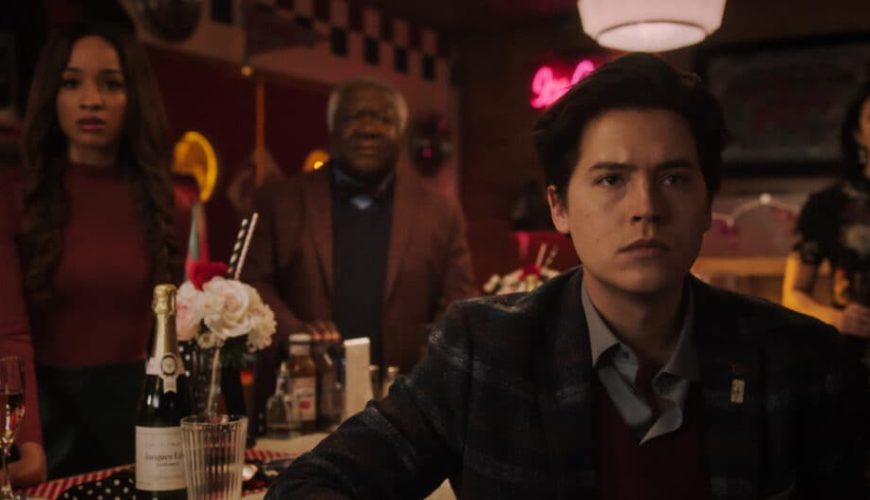 Not only have we made it to the end of Rivervale, but we’ve also made it to Riverdale’s 100th episode! And things are getting … complicated.

This week’s episode kicks off with pretty much everyone returning from the dead and thinking that their death was all part of a bad dream. Then there’s Jughead, who somehow dreams of the explosion at Archie’s house that … never happened in this universe.

When Jug arrives at school later that morning — it’s his first day back as a teacher — everything feels off. Cheryl’s in her cheerleading uniform, and Ben Button is in the bathroom. (Reminder: Ben Button threw himself out a window in the name of the Gargoyle King).

As for Archie and Betty, well, they’re getting married. Oh, and the weirdest thing? Betty gets a call from Dr. Curdle Jr. informing her that he’s looking at Jughead’s corpse! Welcome to the paradox.

It seem the Jughead no. 2 was found strangled along the Lonely Highway, so Jughead does what he does best: He starts investigating his own death. And his investigation leads him to the Riverdale (and Rivervale) comics. He starts reading from the beginning.

Jughead quickly figures out that the explosion at Archie’s house is what put an end to Riverdale and thereby birthed Rivervale. It seems they’re parallel universes — Rivervale serving as a warped reflection of Riverdale.

Jughead shares this news with everyone, as they start to vaguely remember some of the Riverdale stories. Betty remembers Archie dreaming about an explosion, but they don’t understand how Hiram planted the bomb, because in Rivervale, Hiram’s dead!

So without a Hiram, they turn to two Reggies! That’s right, this episode features both Ross Butler and Charles Melton playing Reggie, and I am all in on the ridiculous meta humor.

Another Rivervale twist? JJ is alive! And I swear this is the first time I’ve ever heard him talk.

Also alive are Dilton Doiley and Ethel, who work together teaching physics at the school. It seems Dilton is a bit of an expert on parallel universes and he tells Jug to drop it. Apparently there are an infinite number of parallel universes in a peaceful existence, and if Jug is trying to find a way to separate these two, he could ruin everything.

While Archie’s bummed that his dad can’t be at his wedding, JJ is kidnapped by the Black Hood. And unlike in Riverdale, the Black Hood mystery lasts about 5 minutes because Jughead uses his knowledge to save JJ and Sheriff Keller shoots him immediately. (It was Clifford Blossom, so, still a dad.)

Then, at Betty and Archie’s rehearsal dinner, they find out that Cheryl’s been strangled. Now, Jug is more determined than ever to sniff out Rivervale’s big bad.

Could it be Dilton? That’s what Jug is thinking when he goes to Dilton and finds out that he has no interest in separating the universes. Right now, they’re on track to expand into each other and Dilton has a front row seat! Dilton will happily watch people die to witness such a thing. But Ethel has another idea.

In another Riverdale callback, Ethel poisons Dilton. She’s not willing to let everyone in either universe die, and she knows of a way to save Riverdale (but only Riverdale).

While Veronica comes home to find out the Reggies are equally idiotic and both died facing each other in a duel, Ethel explains that they have to recreate Rivervale’s birth, otherwise known as Archie and Betty’s bedroom explosion. Jughead’s proposal: He and Veronica, as counterparts to Archie and Betty, handle it. As Veronica puts it, “Let’s make out to save the universe.”

But when Jug goes to meet Veronica at Archie’s house — during Archie and Betty’s wedding, I might add — it’s Archie who shows up. It seems Archie is Rivervale’s big bad, because he admits to killing Veronica, Cheryl, and the other Jughead. His reasoning? No one stays dead in this universe, so they’ll be back. In that moment, Jughead figures out that this has all been about Archie’s dad.

Archie claims he was at ground zero for the birth of Rivervale and he knows what it’s capable of. And he needs for it to give him another chance with his dad.

When Archie and Jughead start fighting, Arch is about to strangle Jughead when Betty shoots him. You don’t leave a Cooper woman standing at the alter.

Betty and Jughead then head upstairs to recreate the moment, but just as they kiss, the other Jughead walks in! Confused yet?!

Jughead no. 2 claims he has a way to separate the universes without destroying Rivervale. It’s something he learned from a comic he read when he died and went to the great Pop’s Chock’lit Shoppe in the sky. (I bet those milkshakes are heavenly! Sorry.)

All Rivervale needs to survive is a new power source to fuel it. His suggestion? Imagination. It’s limitless and all-powerful. So, Rivervale needs a story generator, and what is Jughead if not a story generator who rarely showers? If he writes, Rivervale lives, and it stops leaching off Riverdale. But here’s the catch: He can never stop writing and he has to be in total isolation. There can’t be two Jugheads.

So, Betty sets Rivervale’s Jughead up with a typewriter in the bunker and seals him in. Then, she returns to Archie’s bedroom with Jughead no. 2, but the bomb doesn’t go off. Because Jughead wrote it that way. As he writes it, the residents of Rivervale are free to resume their lives. Betty is back with Archie, and Jughead is back with Tabitha.

Now, Rivervale exists in an endless time loop as long as Jug keeps typing. As for Riverdale, we flash back to the moment just before Hiram’s bomb went off. But this time, Betty gets a call warning her to get out of the house because there’s a bomb under the bed.

The episode ends with Riverdale’s Jughead waking up in Archie’s garage when all the windows explode.

All in all, I have to say I enjoyed the 100th episode. It was entirely crazy, but that’s what Riverdale is. And I’m a sucker for callbacks and meta humor of any kind, so this was all very up my alley. That being said, I don’t understand how there was another Jughead at the end? Was Jughead no. 2 in Rivervale NOT Riverdale’s Jug? Okay, I have to stop saying Jug now.