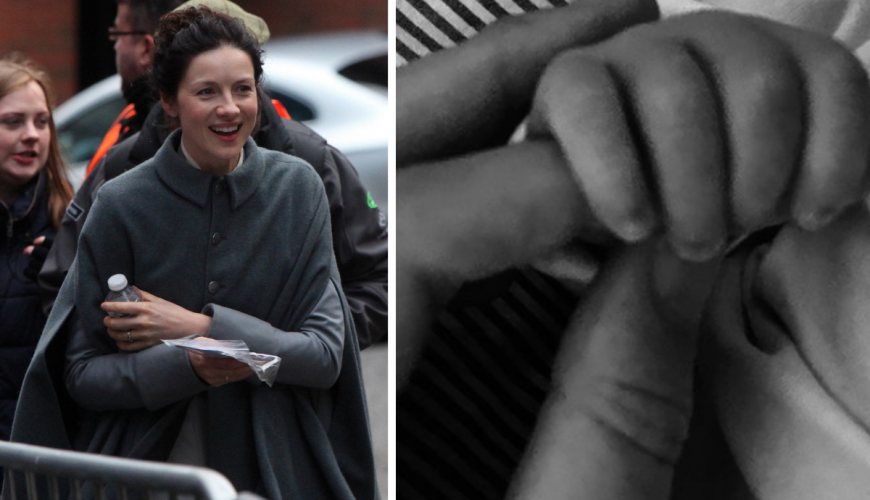 Outlander actress Caitriona Balfe announced yesterday that she had given birth to a baby boy, and her colleagues took to social media to congratulate her.

After keeping her pregnancy under wraps until her son was born, Caitriona who plays Claire Fraser in the show, revealed in her Instagram post that it was the reason she had been so silent on social media.

Amongst the thousands of congratulations from fans, Cait’s Outlander co-stars also sent their best wishes, with one even suggesting she name her son after one of the show’s characters.

While her on-screen son-in-law Richard Rankin, who plays Roger Mac said: ” Many many many many congratulations to you. So happy for you both and your new arrival!”

And Graham McTavish, who plays Dougal McKenzie even suggested she name her newborn after his character.

He said: “Congratulations Cait. Wonderful stuff! I know you may be tempted to name him Dougal but you must resist!!! All the best to you, Tony and your splendid wee man!”

Other cast members including Sophie Skelton and Ducan Lacroix sent an array of heart emojis.

Yesterday, in a post to her 1.7million Instagram followers, Cait revealed her news by sharing a picture of a tiny little baby hand in hers, and wrote: “I’ve been off socials for a while as I was taking some time to enjoy cooking up this little human. We are so grateful for this little soul…that he chose us as his parents. I’m in awe of him already and can’t help stare and wonder at all the possibilities of who he will become, where he will go and what he’ll do on the big adventure of his life.”

The new mum went on to add that she’s so grateful for various reasons.

She added: “Right now he seems so small and fragile and I constantly think how grateful I am that I live in a place, in a time where he is born into peace and safety and yet at the same time I see so many in the world right now that aren’t afforded that same privilege and opportunity … who are born into famine or war and how unjust it is that the same safety isn’t there for all children.

“Here in the west we have so much, we are so lucky and so if you’d like to join me in supporting any of the wonderful charities that need help trying to give those that are forgotten dignity and hope, we can give the gift of peace and safety and opportunity to a few more children …”

My name is Damyan Ivanov and i was born in 1998 in Varna, Bulgaria. Graduated high school in 2016 and since then i'm working on wordpress news websites.
Baby, Birth, Caitriona Balfe, News, outlander, Outlander cast, Sam Heughan, TV Series