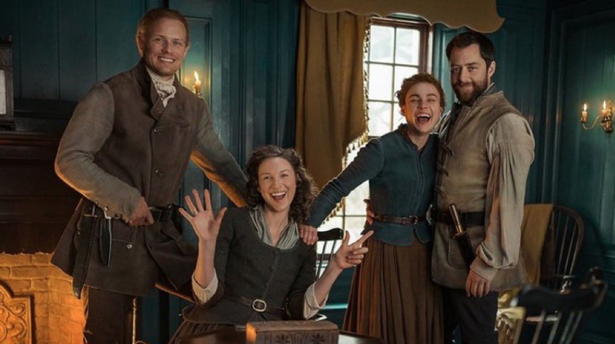 The highly anticipated sixth season of Outlander returned to screens earlier this year with a much shorter series than fans are used to, thanks to the coronavirus pandemic.

However, despite the sixth season being shorter than usual, the Starz bosses are making it up to fans by promising an 18 episode season seven.

Speaking to Esquire, Sam opened up about how the new season is shaping up: “We’re shooting season seven and it’s flying by.”

He continued: “It feels like we started yesterday but already we’re on our sixth episode.

“This season is going to take a while, it’s an 18-episode bumper mega season, so we probably won’t be finished until March or February of next year.

“It’s a big one this year as last year we had to reduce it by six episodes because of Covid and my co-star [Caitriona Balfe] was pregnant, so we moved it.”

When asked if he ever thought the show would become this big, he responded: “In one word: no. Absolutely not.”

He added: “I didn’t know anything of the books when I first started and I remember my first day with my driver and we were driving into work, and he was like ‘How long do you think this will go for?’ and I said: ‘Probably a year, maybe two?’

“Next year it’ll be a decade. So it has been quite a journey, but it’s been incredible, it’s changed my life.

There is also a very exciting Outlander prequel in the works, which Sam teased some information about too.

Telling the publication, he revealed: “All I can tell you is I’m not in it, as Jamie’s not in it!

“I believe that it’s a prequel focusing on Jamie’s parents when they were younger, so I guess you might see a young version of him at some point.

“But I think I may be a little too old to play young Jamie now! I could play his dad maybe, or a flash forward? It is time travel, after all.”