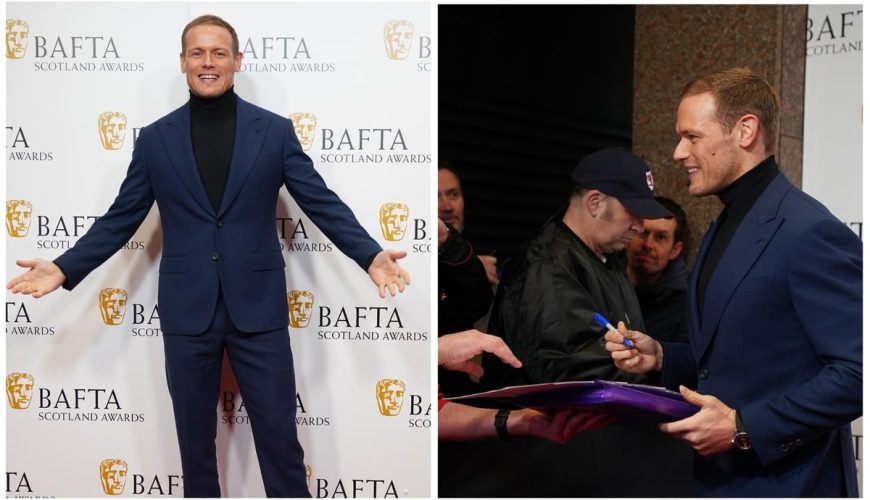 The audience award went to the 42-year-old for his role as Jamie Fraser in Outlander.

The Outlander actor had earlier given a cheeky smile to the cameras alongside his colleagues at the ceremony at the DoubleTree by Hilton hotel in Glasgow.

The 42-year-old was joined at the awards by Caitriona Balfe who plays Claire Fraser in the Starz drama.

Speaking as he arrived, he said: “We may be a small country and a small affair, but it’s a great big celebration.”

Heughan was also joined by a whole host of stars from the film and television industries celebrating Scottish talent.

Peter Capaldi said he was “excited” to attend the Scottish Baftas where he will be receiving this year’s Outstanding Contribution to Film & Television award.

The Doctor Who star spoke on the red carpet as he arrived for the ceremony in Glasgow on Sunday evening.

He said: “The Scottish Baftas has a particular flavour to it. It’s good fun, and its a wee bit less up itself compared to other awards, so that’s nice. It’s very nice to be here.”

The Glasgow-born, multi-talented actor has also been nominated for best actor for his role in Benediction, a 2021 biographical drama film about 20th Century war poet Siegfried Sassoon.

Speaking on the red carpet, Logan, who has been nominated this year for best actress in television for her role in Guilt, said: “It’s exciting to be here at this wonderful event.

“I couldn’t believe it when I was nominated. It’s lovely to see all this wonderful talent come together.”

Other nominees arriving at Sunday night’s event include Mark Bonnar, who is up for winning best actor for his role in Operation Mincemeat, Izuka Hoyle for best actress for her role in Boiling Point and Isabelle Sieb for best director of fiction for Vigil.

My name is Damyan Ivanov and i was born in 1998 in Varna, Bulgaria. Graduated high school in 2016 and since then i'm working on wordpress news websites.
BAFTA Scotland's awards, Jamie Fraser, outlander, Sam Heughan